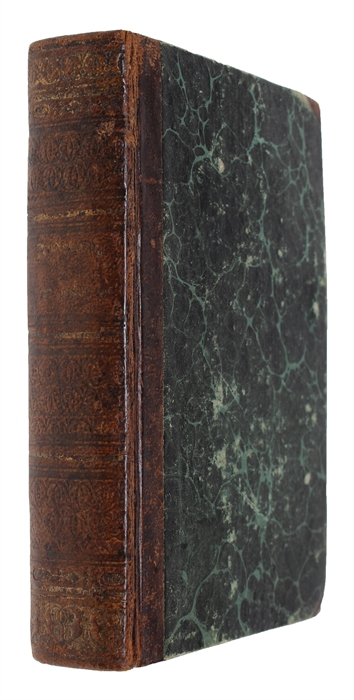 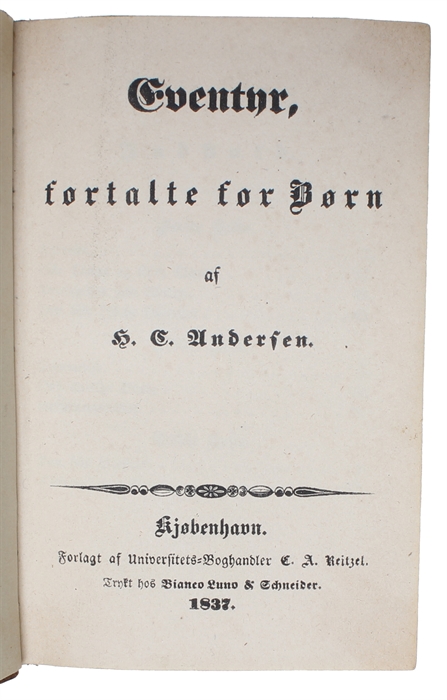 Bound in one nice contemporary half calf binding with blindstamped and gilt ornamentation to spine. Gilding vague, also the gilt title. Minor bumping to corners. Internally a bit of scattered brownspotting, but overall unusually nice, clean, and fresh. A truly excellent copy. See collation below.

A magnificent set - unusually nice and clean and bound together in a contemporary binding, which is almost never the case - of the first edition of this exceedingly rare collection of Andersen's earliest fairy tales. This legendary fairy tale-collection that created the fairy tale-genre and brought Andersen international fame, consists in six parts that together make up two volumes. As with most of the other few existing copies, the present set is a mixture of issues (though here, merely two of the parts are in second issue).

"With the passing of each year, Andersen's genious brought forth new "wonder stories", and the fame he had so desperately craved and striven for became a reality. Little did he know in the spring of 1835, when he all but had to beg his publisher to accept these remarkable tales, that one day they would make him immortal. And little did the critics, nearly all of whom advised him to give up his "experiment" and devote himself to his other writings, ever dream that they would live to see him gain world acclaim for these tales.
For almost a hundred years now, generation after generation has been brought up on Andersen's stories. Take the English-speaking world, for instance. Since the first appearance of Andersen's Fairy Tales in London and New York, in 1846, over seven hundred different editions, including dozens of varied translations, illustrated by more than a hundred different artists, have been published in the United States alone.
Indeed, Andersen's stories will live on as classics - as much part of our civilization as the two primary educational factors, reading and writing." (Jean Hersholt, p. 27).

Due to the fact that the six little pamphlets together, printed in different years, all have their own title-pages, half-titles, contents, etc. and that there were then also printed all of this for each volume of three (times two) together, the book binders almost always removed several of these "extra" leaves, as they seemed superfluous. It was never the intention of the publisher that the single half-titles, title-pages or tables of contents be preserved. However, due to the many different laves that were deemed "superfluous" or not, all existing sets of these two little volumes have their individual mix-up of half-titles, titles, and tables of contents. Thus, no copies are known to exist with all leaves present.

"During Andersen's lifetime 162 of his Fairy Tales were published, but the scarcest and most difficult to obtain are these six little pamphlets. We do not know exactly how many, or how few, copies were printed, but we do know that no copy with all the title pages and tables of contents has ever been offered for sale by any dealer or at any auction. To my knowledge, only five or six complete copies of the first printings (1835-1842) still exist. Even the second printing of the six pamphlets in their entirety (1842-1847) is exceedingly scarce and difficult to obtain." (Jean Hersholt).

Here follows a collation including mention of issues and lacunae:

Vol. I:
VIII pp. (joint title-page (dated 1837) for the three parts, contents-leaf for all three parts, and preface ("Til de ældre Læsere"). The joint half-title merely stating "Eventyr for Børn" has not been bound in.

This is one of the most complete copies we have ever seen, as the only leaves not withbound are some of the half-titles. Usually a lot more leaves have been left out by the binders, and it's even rare to find copies that have all title-pages. The separate contents-leaves are very rarely found preserved in copies that have the joint contents-leaves, and the blank leaves are almost never withbound.