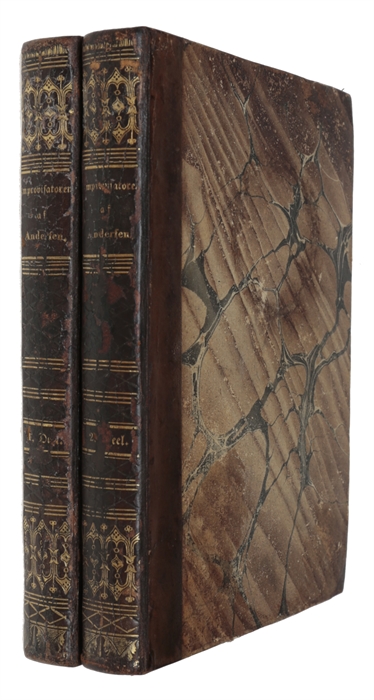 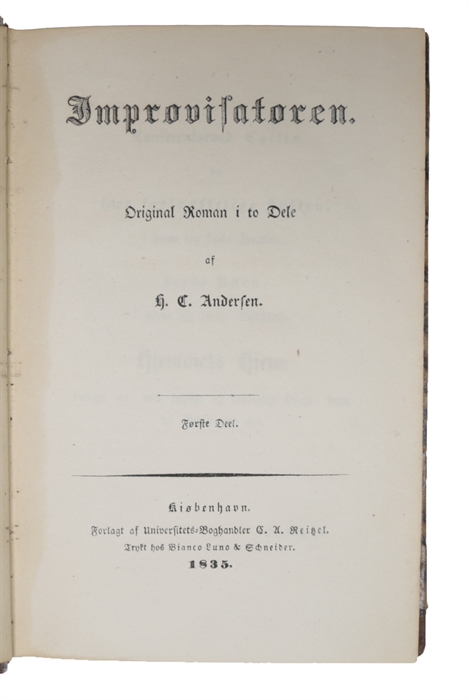 Improvisatoren. Original Roman i to Dele.

Scarce first edition of Andersen's third debut, his first novel, which brought him fame as one of the foemost novel-writers.

"Improvisatoren" is considered one of the most perfect works by Andersen and the work that seriously made him famous, especially in Europe, where he first and foremost came to be known as an eminent author of novels. With his great first novel, Andersen paves the way for the new modern genre of the novel and places himself at the very front of this literary movement.

"Improvisatoren" also constitutes Andersen's efforts throughout the 30'es to write in a picturesque manner. He is extremely proud to say due to his novel, his German translator, "Professor Kruse [...] says that I am the greatest painter and Ørsted says that I should have the brush as well as the pen." (Letter to Henriette Wulff, March 16, 1835).

Andersen is extremely occupied with the novel and focuses greatly upon its reception. To his extreme joy, "Improvisaoren" is tremendously well received, and Andersen almost cannot believe his success.

"People adore Improvisatoren, everything I say and speak they find terrific, everything I utter an urge for they give me. They ask me what dished I would like, if I want to drive on trips. You can very well believe that Oehlenschläger at his Prince is not being flattered more than me. It is the first time that I feel the comfort of being a poet." (Letter to Edvard Collin 5 Juli 1835). Later in the same letter, he asks Collin, if he has heard about the German translation and what impressions that is making - "I long to hear what kind of impression it is making on the Germans."

In April 1835, he writes to Henriette Wulff: "My novel Improvisatoren has now been published in Danish and is being published in German as I write... Never before has any work by me caught the masses so vividly,... "I am "on a wave"; but my heart is full of gratitude towards the good God; from him I feel that it is all a gift, a blessing, he has allowed to flow through my soul." (Letter to Henriette Wulff, April 29, 1835).