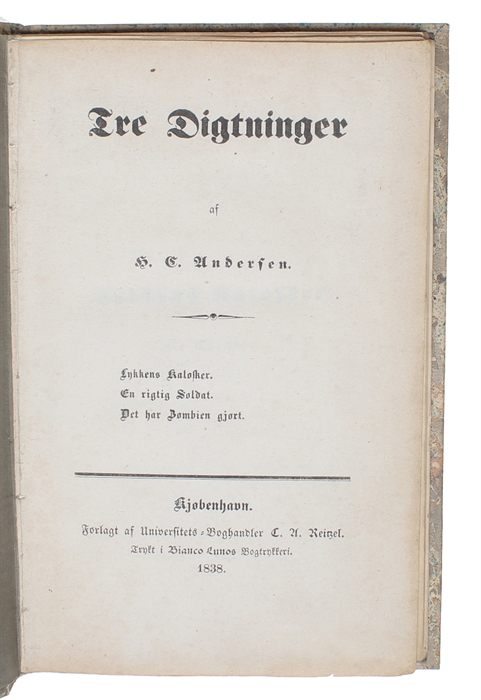 Bound uncut in a later marbled paper binding with gilt title to front board. A bit of brownspotting.

Scarce first edition of Andersen's "Three Poetical Works", which contains the first printing on one of his most important fairy tales, "The Galoches of Fortune", which is in fact his very first fairy tale for adults, here in the original version (it was later re-written for publication in Andersen's collected fairy tales 1849-50). It appeared while Andersen was still publishing his first fairy tale-collection, namely as early as 1838, and constitutes the 18th fairy tale that he publishes, predating e.g. "The Steadfast Tin Soldier". "The Galoches of Fortune" is of the utmost importance to the development of Andersen's fairy tale writing and his style of writing. It is not only his first grown-up fairy-tale, it is also the first, in which he works with dividing a fairy tale into chapters, here bound together by the galoche-motive as the red line.

This highly important fairy tale was so important that even though it differs in style from the other fairy tales for children that appeared during the same period, it needed to be included in the great collection of Andersen's fairy tales that appeared in 1849-50. But for this publication, the fairy tale needed re-writing, both linguistically and stylistically, and thus it is only in the present publication that we have it in its original version.

"The Galoches of Fortune" was very important to Andersen himself, who mentioned it in several letters while he was working on it. In a letter to Ms. Hanck, dated March 16 1938, he talks about his "Three new poetical works"; "The first (i.e. The Galoches of Fortune") is a fairy tale and I think the most satirical one I have written as well as some of the most phantastic that our literature holds." - Clearly showing the importance that Andersen himself bestowed upon the work.

In a letter to Henriette Hanck, dated February 10 1838, he emphasized that "The Galoshes of Fortune" were "not for children". As the fairy-tale is more in line with the "Hoffmann-like imagination" that we also see in "A Walking Tour" than with the spirit and style of the Fairy Tales for Children, Andersen himself also had some anxieties about it, however, and wrote to Frederik Læssøe on February 23 1938 "I'm working on a fairy-tale, but now regret these juggling acts with the golden apples of imagination".

His anxieties world prove not to be completely unfounded. The work was widely read, but it also caused quite a bit of controversy. Kierkegaard, for instance, hated the work and harshly criticized its satirical features. As "The Galoches of Fortune" appear in May 1838, Kierkegaard's first work, "From the Papers of one Still Living", appears in September the same year. That work constitutes his long, sharp critique of Hans Christian Andersen, in which he ridicules Andersen and the genre of fairy tales in general. Kierkegaard furthermore denies that Andersen has any aptitude as a novelist and accuses him of not having "philosophy of life". Andersen had already heard rumours of the book on 30th August and felt martyred at the thought of what lay ahead.

The dramatic poem "A Real Soldier" was submitted to the Royal Theatre in April 1836, but returned in May of the same year.