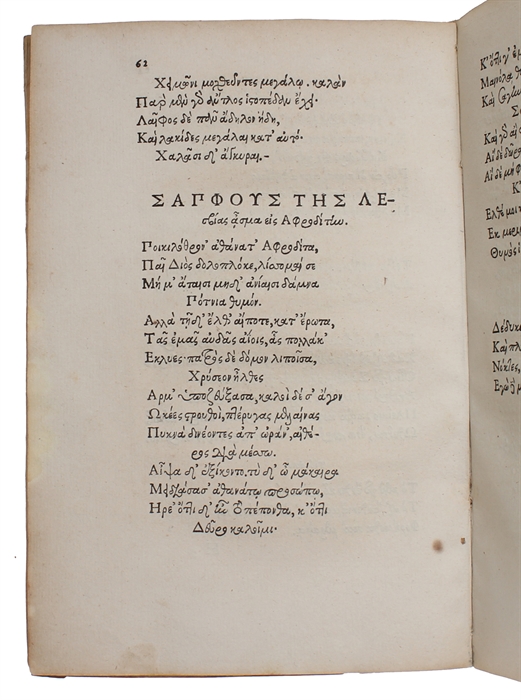 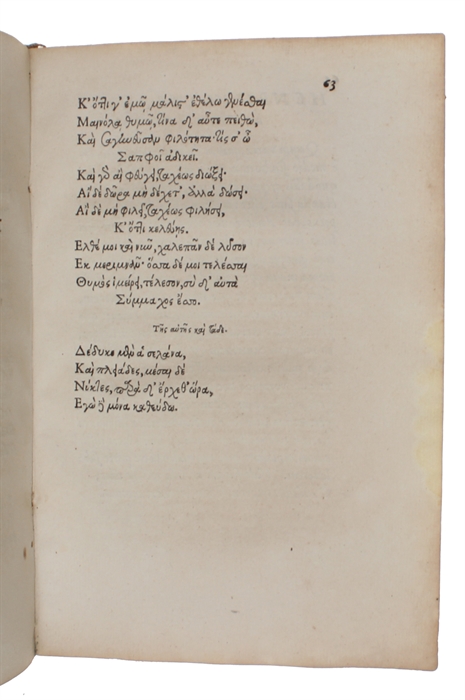 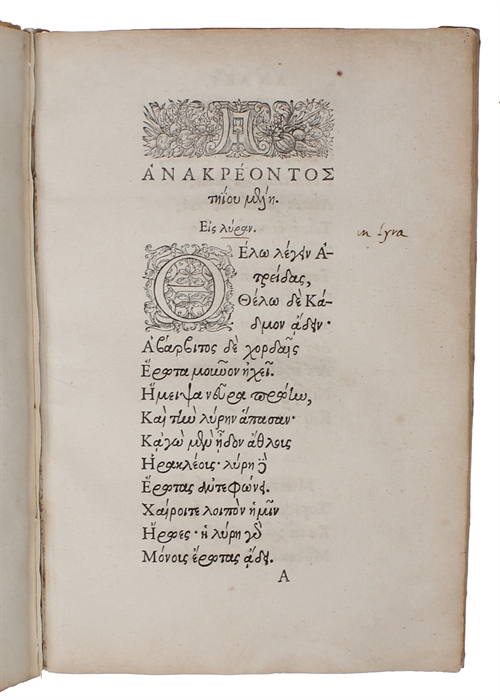 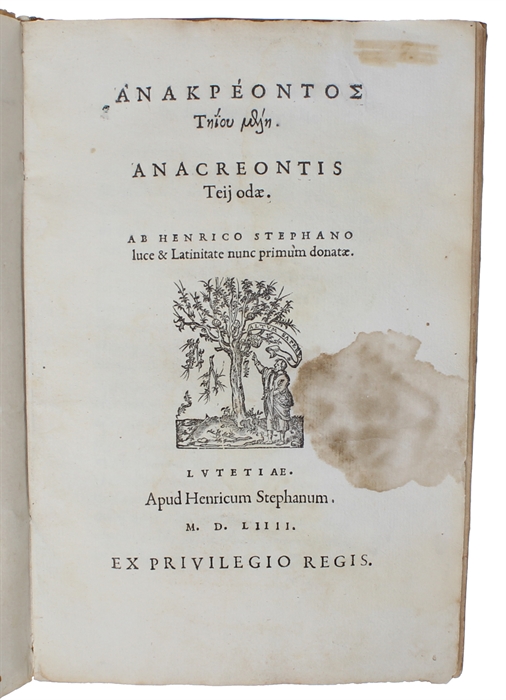 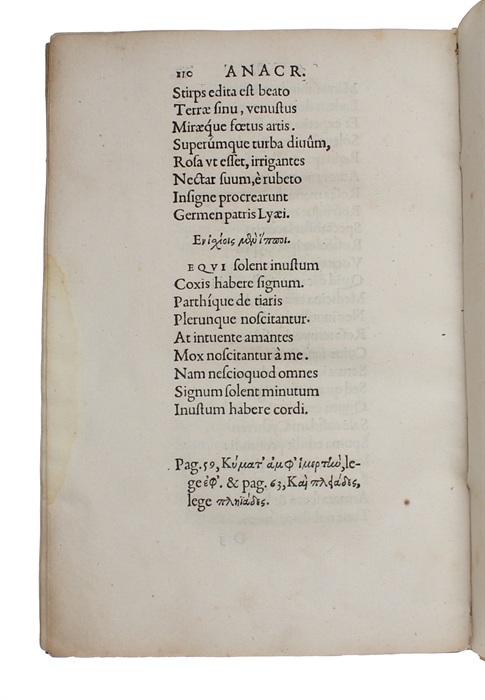 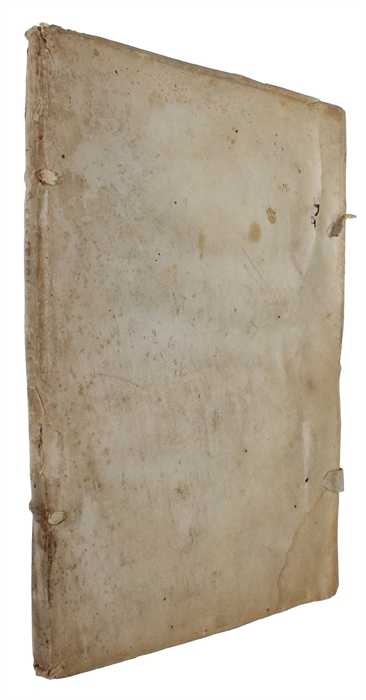 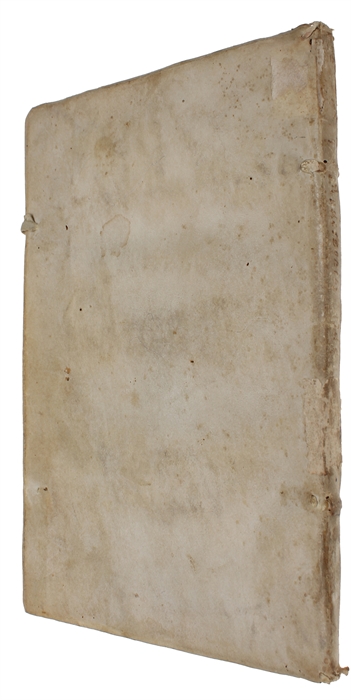 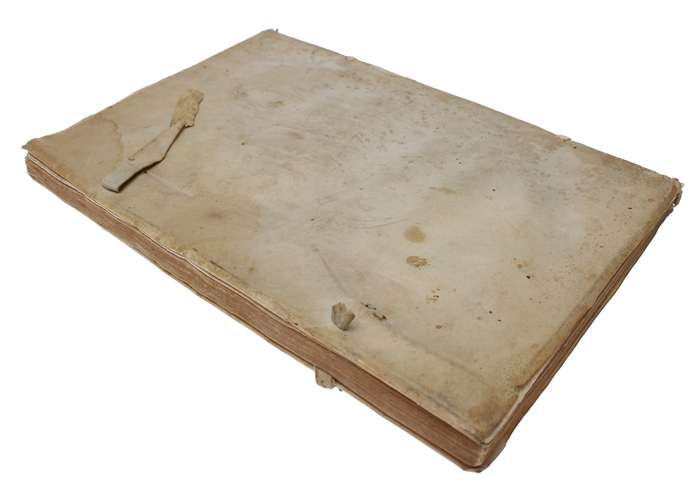 THE STARTING-POINT OF MODERN LITERATURE

4to. Contemporary limp vellum with remains of ties to boards. Remains of contemporary paper labels to spine and traces of autor in ink in contemporary hand, also to spine.A few smaller worm tracts to boards and a bit of spotting, but overall very nice. A large spot to title-page, presumably erased ink, from the removal of an old owner's name. The spot is in the blank margin, close to the printer's device, but not touching it. Apert from that internally very nice with only light occasional damp staining or browning. Old ink note in Greek characters to front free end-paper and a small note (referring also to "Lyra") on A(1)r. A very nice copy with large margins. Woodcut printer's device to title-page, woodcut headpiece and opening initial. Magnificently printed in all three sizes of the famous "grecs du roi"-type. (8), 110 pp.

Rare first edition of the groundbreaking Anacreon-volume by H. Estienne, being the milestone publication that not only constitutes the first book by the brilliant Henri Estienne II, but also the extremely influential editio princeps of the Anacreontea. Furthermore, this groundbreaking publication contains Sappho’s now immortal Aphrodite-hymn, being the very first of any of Sappho’s poems to appear in print (here for the second time in print) as well as the magnificent “Midnight poem” (fragment 168B), establishing for the first time since antiquity the gathering together of poems by Sappho: “A momentous point in her transmission. Yet it is ironic that the first collection of a fragmentary Greek poet known and admired beyond any other today should have appeared as a mere appendix to a book dedicated to another author entirely, without even her name on the title-page.” (Cambridge Companion to Sappho, p. 251).

The impact that Sappho - “mother of all women poets” - would eventually come to have upon modern poetry and society was not yet known to Estienne and his contemporaries, for whom she was more or less unknown. Estienne, however, recognized the value of the poems of hers that he had encountered and with the publication of them in the present volume began a tradition that would eventually cause her to become arguably the most celebrated Greek poet of all time. “Estienne’s edition of Anacreon’s poetry was enthusiastically received by the Pléiade poets, which considerably boosted Sappho’s influence on western European literature”. (van Dijk: I Have Heard about You, p. 37).

This beautifully printed slim volume constitutes an outright Renaissance sensation. “The “Anacreaonta” became the most influential “ancient” Greek poetic text during the Renaissance, and Estienne’s “editio princeps” virtually caused a poetic revolution, not only in France, but also in Italy and Germany – where this influence culminated in the 18th century with the Anacreontic Poets (“Die Anakreontiker”).” (Schreiber 139).

Henri Estienne II – “in many ways the greatest member of the Estienne dynasty, and most certainly its most prolific scholar” (Schreiber) - had travelled extensively through Italy, the Low Countries, and England, in search of Greek manuscripts. It is from one of these that he had printed (possibly by Guillaume Morel) his first book, this editio princeps of the Anacreaontea, which is thus also the first book to bear his imprint.

Henri Estienne, along with his contemporaries, believed the work to contain the ancient Greek lyrics of the poet Anakreon (6th century BC), whose poems, are not extant, except for some short fragments. In fact, the poems contained in this volume constitute the Anacreontea, which is a collection of Greek lyric poems written in the style and imitation of Anacreon, at various dates. “Henri’s publication of these “ancient” Greek lyrics caused an immediate literary sensation in France, and was celebrated and immortalized by Ronsard, in an oft-quoted passage of his “Odes”.” (Schreiber).

Henri Estienne started out his publishing career with this magnificent publication that catapulted him into fame, and he went on to become one of the most influential literary and scholarly figures of the second half of the 16th century in Europe; he dominated Renaissance scholarship with his magnificent publications and has arguably not been superseded by any publisher since.

The young Henri Estienne had discovered the present poems in Louvain, in a manuscript owned by an Englishman named John Clements, who was a friend of Thomas More. Their publication “was a sensation of the first class and the starting-point for a new branch of modern literature” (R. Pfeiffer: History of Classical Scholarship”, p. 109).

“This first edition was greeted with tremendous enthusiasm by the members of the Pléiade, who, like everyone else, believed the poems genuine, and each of whom immediately translated or imitated some of the “Anacreontea”.” (Schreiber). The poems may not have been “genuine” Anacreon-poems, but the influence that the publication of them came to exercise was no less profound than had they been; the mark they have left of modern literature is difficult to compare to anything else.

The printing of the original Greek text, in all three sizes of the magnificent “grecs du roi”-type, is followed by the first Latin translation of the poems, done by Estienne himself, and by Estienne’s own commentary.

The text of this editio princeps has been followed by almost every subsequent editor, and today the name Anacreon cannot be mentioned without thinking of Estienne.

After the Anacreon-poems themselves, are two leaves containing first, poems by Alkaios, and second, the two famous poems by Sappho: The Ode to Aphrodite (fragment 1) and the Midnight Poem (fragment 168B, also known as “The Moon Sets”), constituting a momentous point in the Sappho-transmission, namely the first time since antiquity that anyone had gathered together poems by her. Soon after, more Sappho-collections would appear causing her to eventually become the most admired Greek poet.

“In a recent article, R. Aulotte… shows how Sappho’s influence on the poets dates from the time when Henri Estienne published the odes then known along with his famous edition of Anacreon. His first edition, published in 1554, contained the “Ode to Aphrodite” and the fragment “The Moon has Set”.” (Mary Morrison: Henri Estienne and Sappho, in: Bibliothèque d’Humanisme et Renaissance T.24, N.2 (1962), p. 388).

"From time immemorial women poets have had only one norm, one touchstone: Sappho, the legendary woman poet who lived on the island of Lesbos in the Aegean sea in the 6th century BC. … The Sappho figure is the peg on which views of female poetic genious and female sexuality have been hung, century after century.” (Suzanne van Dijk: I Have Heard about You…, p. (35) ).