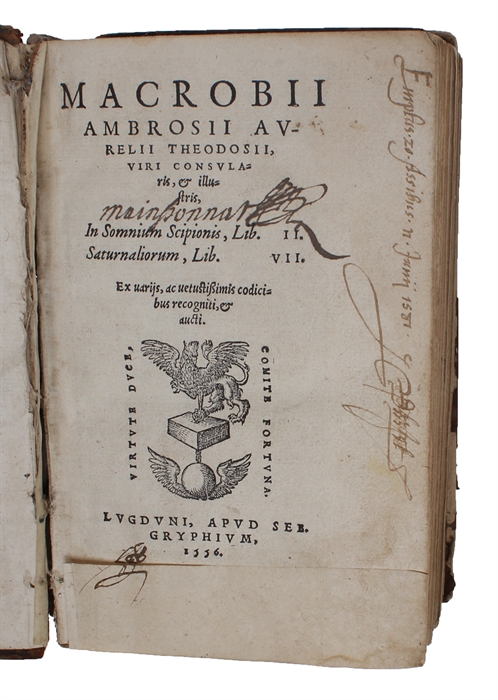 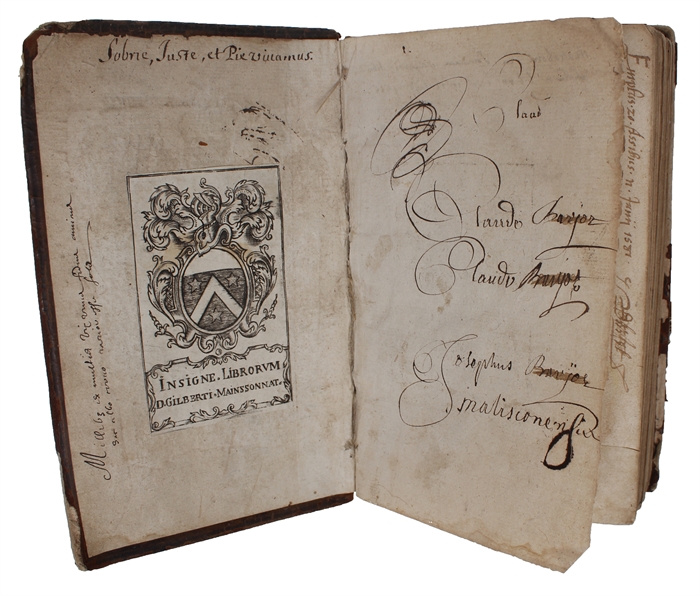 8vo. Cont. full calf. Raised bands, gilt borders on covers. A gilt centerpiece on both covers. Leather at upper compartment of back gone and a nick to lower compartment. Corners bumped and worn, somewhat rubbed. 567,(71) pp. Old repair to foot of title, no loss of text. Some old ownership inscriptions on endpapers and title, 2 old engraved bookplates pasted on front-and endpapers. Internally with a few mainly marginal brownspopts and a faint dampstain in lower corners of the first leaves. Woodcut initials. "Somnium" pp. 3-178 having geographical woodcuts in the text and a woodcut map of the old world. Printers woodcut-device on title.

Fourth Lyon-edition of Macrobius's 2 main works. In the "Somnium" he uses passages of Cicero's work as mere suggestions to construct a treatise on Neoplatonic philosophy - the most satisfactory and widely read Latin compendium on Neoplatonism that existed during the Middle Ages. Macrobius was one of the leading popularizers of science in the Latin West, and his conception of the world geography as an equatorial and meridional ocean (depicted in the book) dividing the earth into four quarters, dominated scientific thinking on world geography in the Middle Ages. - His "Saturnalia" deals with Roman feasts in form of table-talk at a banquet in Rome, giving information of food and drink and their preparation (Vicaire 986 (ed.1492, Simon p. 547 (ed. 1492)). and is fascinatingly rich in philological, historical, antiquarian and scientific lore, throwing a clear light on the interests and taste of the period. - Adams vol. II: M 68.