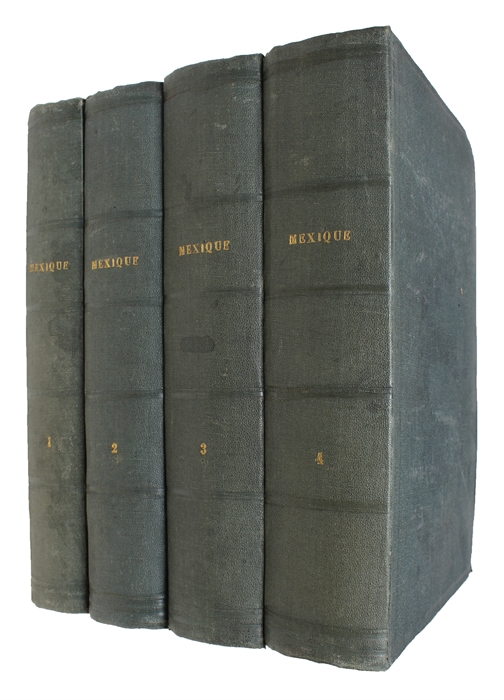 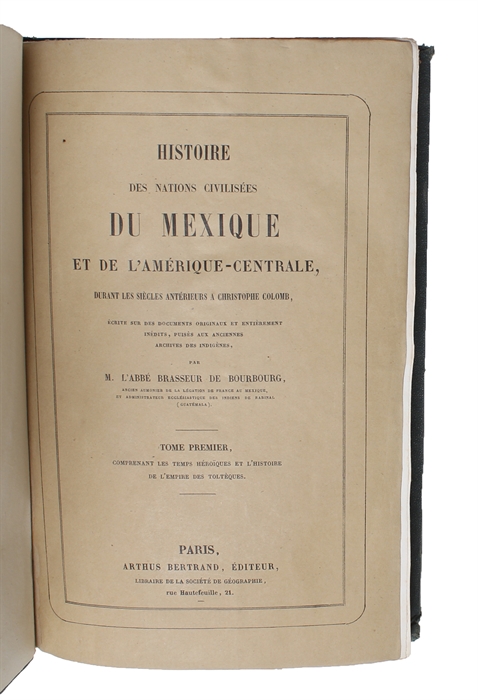 PAVING THE WAY FOR THE DECIPHERMENT OF THE MAYAN HIEROGLYPHS

Scarce first edition of Bourbourg's famous account of the culture and the indigenous people of Central-America, one of the most important works on that area's people and language. Due to his discoveries of important texts and codes of ancient Mexico, Bourbourg was one of the pioneers of archeology and pre-Columbian history: "He studied on the spot the primitive Mexican civilizations, collected important material on the geography, antiquities, and ethnology of Mexico and Central America, edited numerous curious texts such as the Manuscrit Troano [...], and published works which, like the 'Lettres' [...] , but especially [the present work], assured him of a fine reputation as a scholar of America." (Dictionary of Canadian Biography).

Several sections of the present work deal with the languages of Mexico. The work contains an introduction by Bourbourg's fellow-archaeologist, Joseph Marius Alexis Aubin, in which Aubin demonstrates how Mexican pictographs were used not only to represent objects, but also to stand for the syllables forming a word. Having spent much of his time trying to decipher the Mayan hieroglyphs, the present work, with its ingenious introduction, paved the way for Bourbourg's announcement in 1863 of his discovery of a key to the Mexican hieroglyphs. The key difference between the Mayan script and other logosyllabic Mesoamerican writing systems that allowed for its linguistically more precise decipherment was a large corpus of inscriptions and its continued use into the Colonial period. In 1862 Bourbourg discovered Bishop Diego de Landa's redacted manuscript Relación de las Cosas de Yucatan (Tozzer 1941), which contained a rudimentary Mayan "alphabet." Following this discovery and his equally important find of a section of the Madrid Codex, Bourbourg attempted a phonetic approach to glyphic decipherment.