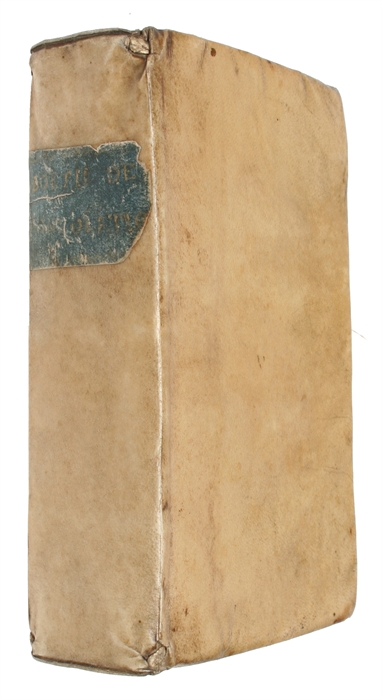 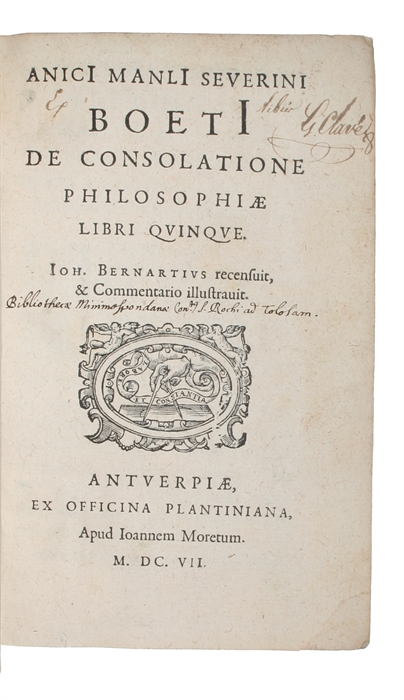 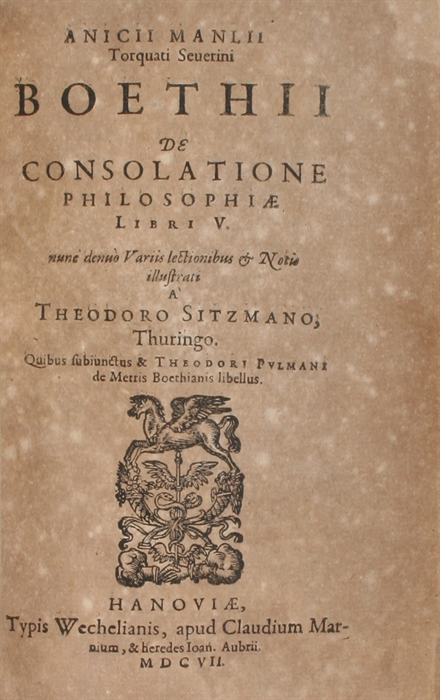 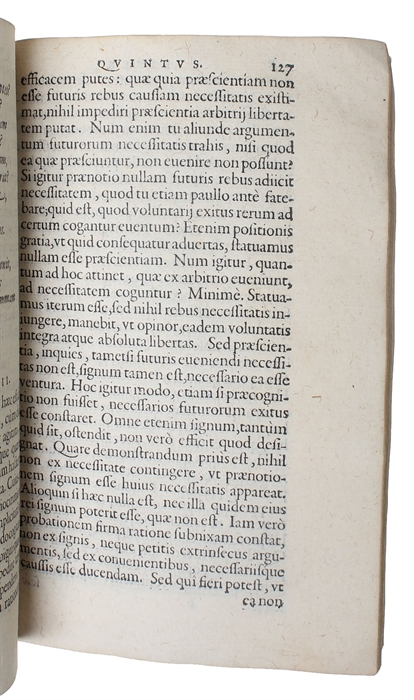 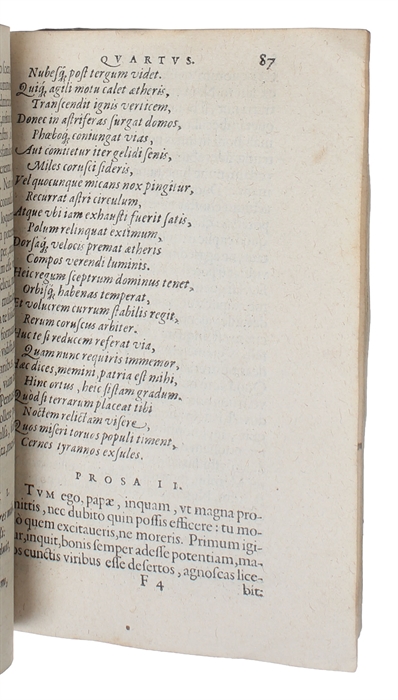 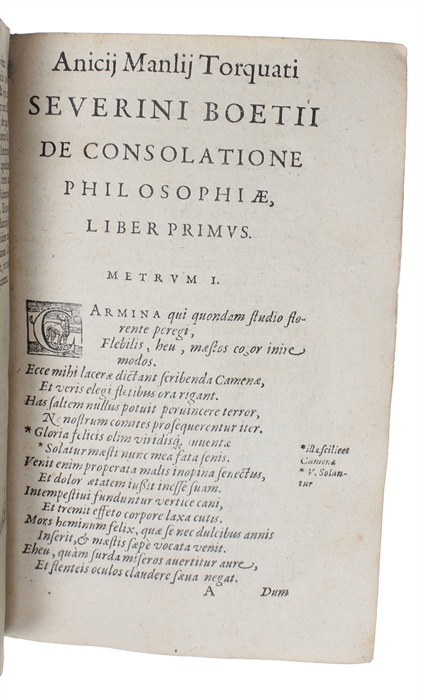 PRE-COLLECTED EDITION OF THE "VARIORUM BOETHIUS"

First editions, both published in the same year, of two highly esteemed commented editions of Boethius' seminal "The Consolation of Philosophy", which together make up an important contribution to Boethius-scholarship and the understanding of this most central text of both Antiquity, Christianity, and the Middle Ages. In fact, the collection of the two present editions, collected and bound at the time of their appearance, almost constitute a singular pre-edition of the famous and important so-called "Variorum Boethius", which appeared more than 60 years later, in 1671, and unites the commentaries and notes of Bernartius and Sitzmann. The 1671 edition, which was printed in Leiden, became very popular. According to Dibdin, "The first edition is a very good one, and is emphatically styled, "the Variorum Boethius."... The notes, chiefly by Sitzmanus and Bernartius, are numerous and pertinent." (II:352-53).

The beautiful and elegant Plantin-edition constitutes one of the most important commented editions of Boethius' work. It is renowned for Bernartius' excellent and extensive commentaries and the correctness of the text.

The Marnius-edition is of great value due to the learned commentaries and notes by Sitzmann, which include an apparatus of classical and post-classical sources.

It is of great interest to see the two works collected in this manner, many decades before the commentaries by the two renowned scholars were collected officially and printed together. Apart from the difference in notes and commentaries, the two works complement each other in other respects as well, contributing to the value of having them together. For instance, the Plantin-edition contains Julianus Martianus Rota's "Life of Boethius", whereas the Marnius-edition contains Theodore Peolman's foudational study on Boethian metre and verse.

As such, the present book unites two works of the most excellent complimentary value, greatly contributing to the understanding of one of the most important, influential, widely discussed and studied works of Antiquity and the Middle Ages.

As a philosopher Boethius (480 - ca. 525) stands tall in the middle between Antiquity and the Middle Ages. Time-wise he clearly belongs to late Antiquity, but he is a Christian and he writes in Latin. Still being a Christian, he also comes to represent the actual centre of a tradition that goes directly back to Plotinus and thereby indirectly back to Plato and Aristotle.

Boethius was imprisoned and later executed, accused of treason against the gothic regime as well as of sorcery, though he himself claims that it was caused by his political activity, where he as a court official defended the weak; caused by his uprightness, his enemies were too many. The most plausible explanation is that Theoderic doubted the loyalty of the Roman aristocracy and thereby especially the frank Boethius.

While in prison, Boethius wrote this his main work, which is without a doubt the most widely read, commented and influential of his works. The work is atypical for the time and is written as a philosophical conversation between Boethius himself and the goddess of Philosophy. Though always a Christian, in this work he is first and foremost a philosopher, which is why there are many allusions to pagan neo-platonism, however during the Middle Ages all passages of this work were very popularly interpreted in accordance with Christianity. Few people have been of so seminal character to medieval philosophy and religion as Boethius; perhaps only Aristotle himself and Augustine were more influential and important. Few books were so widely read during the Middle Ages as the Consolation of Philosophy, and virtually no book has been as major a source of ancient philosophy in the early Middle Ages as this one. As well of being of great textbook value this work has inspired and influenced numerous religious, philosophical and literary writers. "For some writers, such as the Middle English poet, Chauser, the "Consolation" seems to have provided a model for writing about serious issues in a way which presupposes no commitment to Christianity, a philosophical precedent for the use of pagan setting in a literary fiction." (John Marenbon, Medieval Philosophy, 1998, p. 24).

With the death of Boethius came also the end of ancient tradition of philosophy in the Latin West, though through his writings, the influence of this philosophical tradition was preserved during the Middle Ages and through to the Renaissance and early modern times.