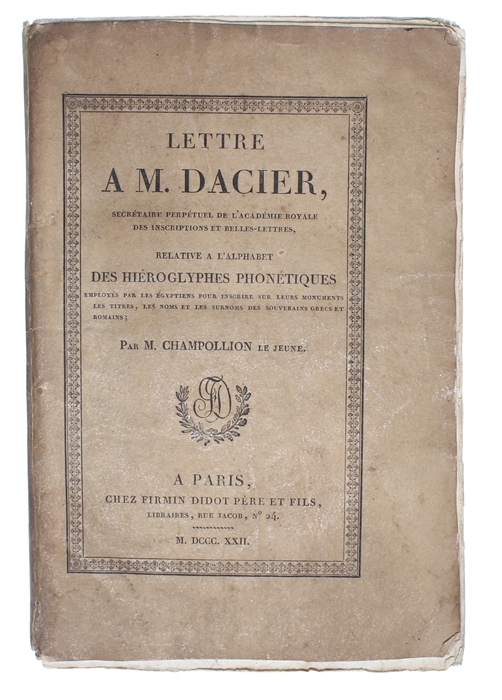 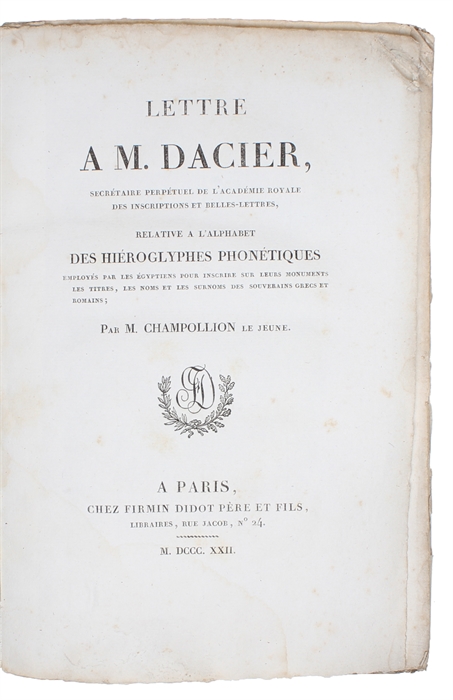 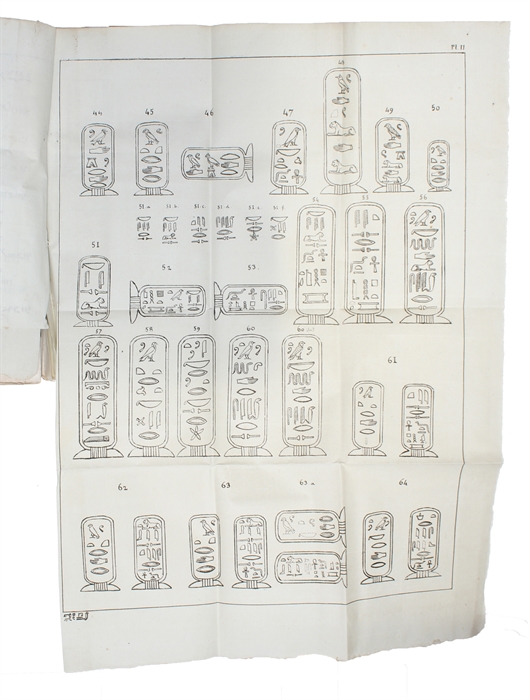 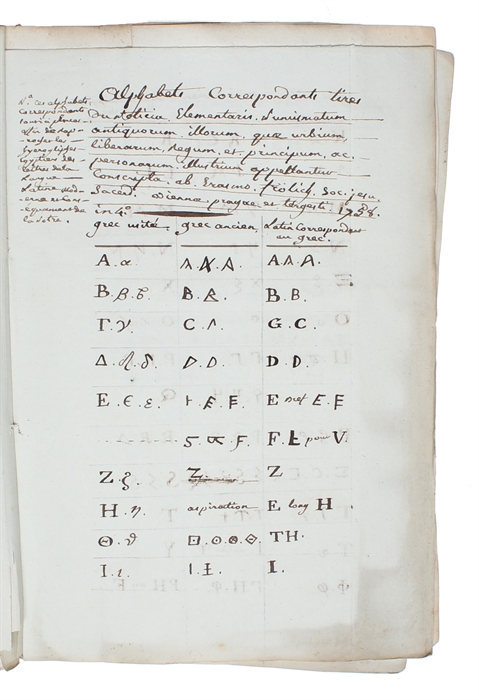 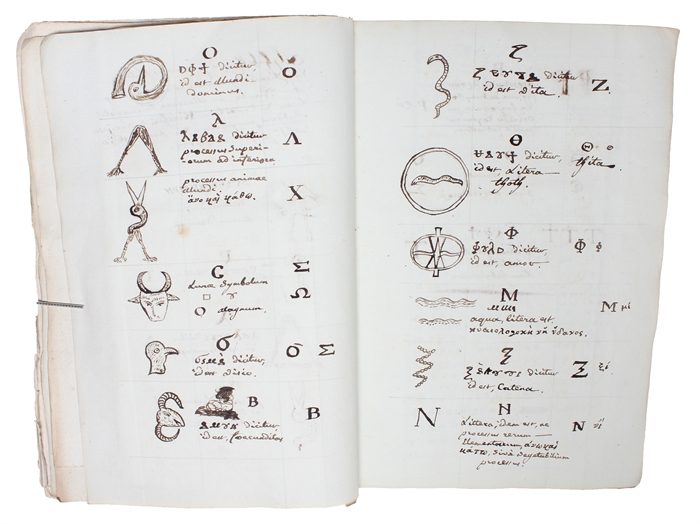 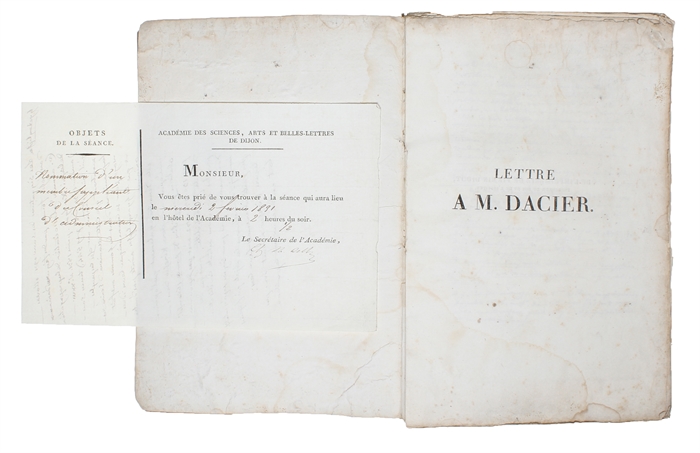 "I'VE GOT IT" - CRACKING THE CODE OF THE HIEROGLYPHS

8vo. Uncut in the original printed wrappers. Front wrapper slightly soiled and a bit of light dampstaining throughout. Upper corner worn. Six leaves with contemporary neat annotations, scholarly notes and drawings have been inserted at the front and the back - one double-leaf in front of the title-page (with one page of annotations with references to other works by Champollion), two leaves between plates III and IV (with two and a half pages of Greek-ancient Greek-Latin correspondence alphabet) and three leaves at the end, before the final blank (with five pages of an alphabet of the first Egyptian letters - very neatly drawn - and an alphabet-correspondence at the end). A very charming and interesting copy in the exceedingly rare original wrappers. Housed in a half morocco slipcase with gilt lettering to spine. (4), 52 pp. + 4 folded plates + 1 blank leaf.

The scarce first edition, in the even scarcer original printed wrappers, of Champollion's milestone work, which announced for the first time the deciphering of the Rosetta Stone, provided the key to reading Egyptian hieroglyphs, and gave birth to the entire field of modern Egyptology. This seminal work arguably constitutes the single most important philological work ever written.

"[...] in the actual state of Egyptian studies, when the monuments stream out from all sides and are collected by the rulers as by amateurs, and when also the scientists of all countries are eager to engage in serious research of their subject matter and are eager to penetrate deeply into the knowledge of these written monuments which must be used to explain all the others, I do not think I should wait till another time to bring to the scientists' attention and under your honourable auspices a short but important series of new developments, which naturally belong to my Memory on HIEROGLYPHIC writing, and which will doubtlessly save you the trouble that I have taken to establish what may be very serious errors about the different periods in the history of Egyptian art and the general administration of Egypt: for this is about the series of hieroglyphs that, making an exception to the general nature of the signs of this writing, have been equipped with the ability to EXPRESS THE SOUNDS of the words, and which are used in the inscriptions of the public monuments of Egypt, the TITLES, the NAMES, and the EPONYMS OF THE GREEK OR ROMAN SOVEREIGNS, who rule Egypt one after the other. Many certainties in the history of this celebrated piece of land must arise from this new result of my research, to which I have been led quite naturally." (pp. 2-3) (*) says Champollion on the opening pages of the present letter to Mr. Dacier. And thus was laid the foundation of modern Egyptology.

Jean Francois Champollion (1790-1832), known as the father of Egyptology, was by no means exaggerating when he stated the above - his letter to Mr. Dacier upon his new discoveries and the decipherment of the Egyptian hieroglyphs did change the study of Egypt and Egyptology more profoundly than any work before or after. Ever since the publication of the present work, Champollion has been credited with being the first to correctly and fully decipher the inscription on the famous Rosetta Stone, translating it, and breaking the mystery of the ancient hieroglyphic script; it is in the present work that this milestone event in the history of modern man is announced first time, and it is due to this discovery that he is accepted as the founder of Scientific Egyptology.

The Rosetta Stone, which dates back to 196 B.C was found in 1799 by French Troops and was immediately brought to England, where it has been ever since. The stone was (and is) of the utmost importance to the understanding of the Egyptian language, the principles of which were totally unknown up until this point. Because the hieroglyphic inscription on the stone is accompanied by a Greek and a Demotic one with the same contents (the commemoration of Ptolemy V's accession to the Egyptian throne), Champollion was able to crack the code of the hieroglyphs and to read a language that had not been read for far more than a millennium.

Other very skilled linguists had worked on the decipherment of the hieroglyphic inscription simultaneously with Champollion, but they had all given up by the time that Champollion finally had his first true breakthrough. It came in 1822, when he successfully deciphered two Egyptian names, Ramses and Thutmos, written in hieroglyphic characters in temple cartouches.

Champollion's discovery pointed to the fact that the Egyptian hieroglyphs functioned as an alphabet, a phonetic language and a system of symbols that could stand for words or concepts.
"And if the resembling signs of the two names render THE SAME SOUNDS on both cartouches, it is due to their ENTIRELY PHONETIC character." (p. 7). (**) He succeeded in showing that the Egyptian hieroglyphic writing system was a combination of phonetic and ideographic signs, and using his new discovery as a foundation, Champollion next turned his attention to common nouns, and deciphered the phrase "birthday celebrations" from the Rosetta Stone.

"It is a complex system, writing figurative, symbolic, and phonetic all at once, in the same text, the same phrase, I would almost say in the same word" says Champollion about the hieroglyphs, in the present work, after having established their meaning.

He had finally cracked the code and was sure of it. He was so excited by this monumental discovery that he immediately ran to his brother's house, into his office, shouting the famous words "Je tiens l'affaire!", i.e. "I've got it!". It is said that he then fainted and spent the next five days in bed recovering.

Shortly after his recovery, he began writing the letter for Mr. Dacier, outlining the discovery that laid the foundation for deciphering hieroglyphs, which was published later the same year, and a condensed version of which he presented as a speech at the Academie des Inscriptions. When he presented the speech, Thomas Young, who had given up breaking the code four years earlier, was also in the audience.

Champollion was an extraordinary philologist, who, by the age of sixteen, besides Greek and Latin, mastered six ancient Middle Eastern languages, among these Coptic, the knowledge of which, unlike that of Egyptian, was never lost. As the first, Champollion realized the connection between the Coptic and the Egyptian language, and was able to identify many of the Egyptian words on the Rosetta Stone, as he could read them with their Coptic equivalents. He was the first to believe that both Demotic and Hieratic represented symbols, and not sounds as earlier presumed. After that he quickly realized that each single hieroglyph could represent a sign, and he began compiling a hieroglyphic alphabet. When publishing his letter to Mr. Dacier, he presented the fact that the hieroglyphs represented sounds as well as concepts, according to context.

Champollion is thus the constructor of our present code of the hieroglyphic alphabet. "Further study enabled him to discover the values of a number of syllabic hieroglyphic signs, and to recognize the use of hieroglyphs as determinatives. In cases where the Greek text supplied him with the meaning of hieroglyphs of which he did not know the phonetic values, his knowledge of Coptic enabled him to suggest values which he found subsequently to be substantially correct. Further reference to determinatives and the importance of parallel passages and texts will be made later on in his work. Between 1822-24 CHAMPOLLION worked incessantly, and was enabled to modify much of his earlier views, and to develop his Alphabet, -and he evolved some rudimentary principles of Egyptian Grammar..." (Wallis Budge, The Rosetta Stone in the British Museum, pp. 224-25). "


ORIGINAL FRENCH TEXT OF THE QUOTATIONS ABOVE (WHICH ARE IN OWN TRANSLATION):