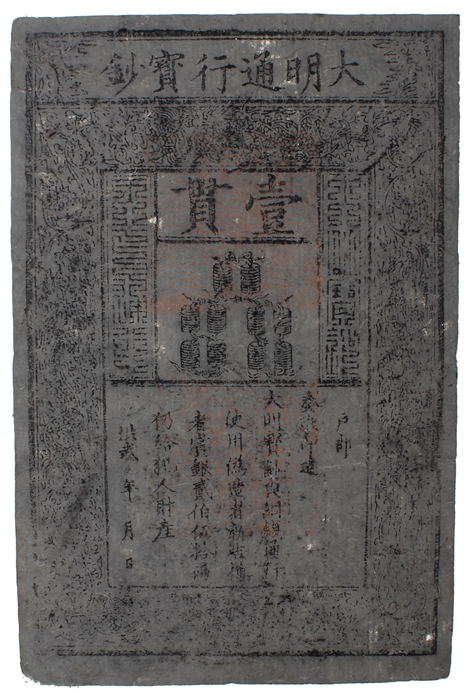 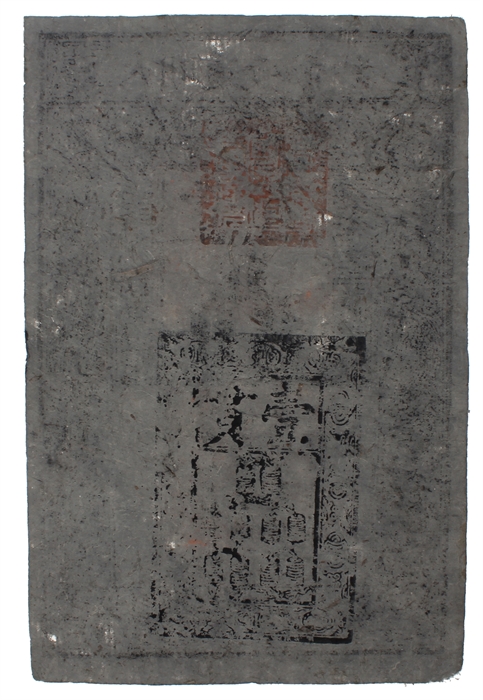 Folio (340 x 225 mm). Woodblock printed on grey mulberry paper. Uncirculated condition (UNC). Ornamentation and text faded, which happens naturally over time with mulberry paper, but legible. Lower left corner slightly rounded, which is also due to the quality of the paper and not due to use.

1. Two red (vermilion) seal handstamps, one at each side, are located on the note. These stamps are typically not so clear, because they naturally fade over time. The seals of the notes are what signatures are to modern notes.
The red imperial seal is applied on the reverse.
2. At the top are six chinese characters "Ta Ming t'ung Hsing Pao Cha's (Treasure Note of the Great Ming) in regular (K'ai Shu) style. Text is in black.
3. The outer frame is ornated with dragon patterns surrounding the text. Ornamentation is in black.
4. The upper center is printed with the face value "1 Kuan" (One string) in regular (K'ai Shu) style. "One String" was at this time equivalent to 1000 copper cash or one tael of purse silver or one-fourth tael of gold.
5. The middle center is printed with diagram of ten piles containing ten copper coins, each coin representing the value of 10 cash (this equals 1000 copper cash).
6. On both sides of the center are eight chines characters "Ta Ming Pao Ch'ao, Tien Hsia T'ung Hsing" (The Great Ming note, circulates everywhere) in real (Chuan Shu) style.
7. The lower center is written in chinese and could be translated to "This Ta Ming Pao Cha'o is printed with the approval of the Emperor through the Hu Pao and used side by side with the copper cash. Those who counterfeit Ta Ming Pai Cha'o will be beheaded while an informant will be rewarded with 250 taels of silver with confiscated property of the convicts into the bargain".
The size of the 1 Kuan note is the largest paper-money ever issued.

The oldest paper-money that are preserved until today are those from early Ming dynasty, dated year 1375. These notes are the earliest numismatic printings. Only a small number of these paper-money are still available for the numismatic or printing collector. The significance of the first 1 kuan banknote was emphasized by the fact that it featured as one the world-changing inventions in the British Museum project, A History of the World in 100 objects, selected by the Museum's Director, Neil MacGregor (Broadcasted by BBC 4 in 2010).

No copies of the 1 kuan note was known until around 1900 where a cache of notes in the base of an overthrown statue of Buddha was discovered. The second find was made in Peking in 1936, when a pile of notes was uncovered during the demolition of one of the city walls.

The beginning of the 15th century saw a high rise in inflation, primarily of the over-printing of notes. Because of the inflation and the silver bullion obtained through Chinese trade with the Spanish in Manila, the use of paper money gradually diminished.

The first banknotes were not issued in the Western world until 1661, when Sweden printed kreditivsedlar (credit notes) as an alternative to their massive copper coins.