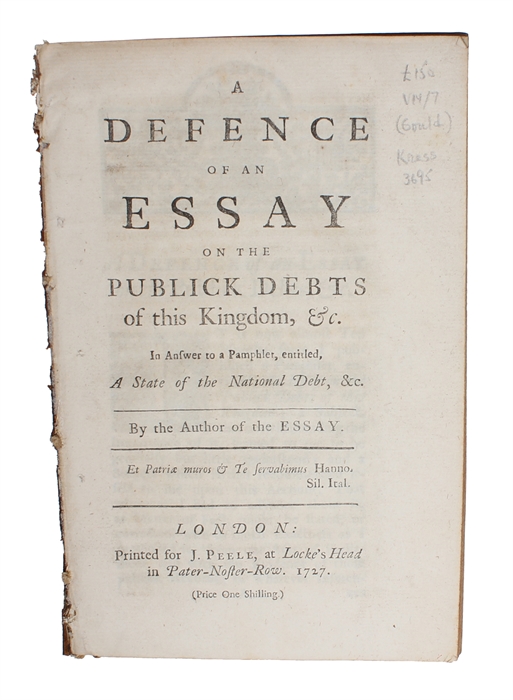 THE NATIONAL DEBT OF ENGLAND

A Defence of an Essay on the Publick Debts of this Kingdom, &c. In Answer to a Pamphlet, entitled A State of the National Debt, &c.

Scarce first edition of Gould's influential treatise in which he declared that the interest on government securities should be kept near "the natural interest of money," as defined by Locke. Gould's essay is the very first work commenting on England's massive debt burden in the 18th century and it anticipates the major economic debate on the role of national debt and The Sinking Fund by 50 years.

Gould documented that since 1716 the national debt had been greatly reduced and he argued that in time, by the application of the principle of compound interest, the sinking fund would pay off all of the national debt. To support this argument he showed that one million pounds, accumulating at four percent compound interest, would amount in 105 years to 1575 millions.

"The English public was in fact so nervous [by the massive national debt] that the Pitt government in 1786 resumed, on a larger scale and more seriously, the policy of paying an annual sum into a Sinking Fund. The plan adopted is usually attributed to the suggestion of Richard Price, [1772]. Sir Nathaniel Gould had published similar views before [in the present publication]. (Schumpeter, History of Economic Analysis, 327).

"Gould appears, in fact, to have been the first person to have employed those arguments on behalf of the policy of simultaneously borrowing and repaying which subsequently became an accepted element in financial theory. [...] Gould had complete confidence in the permanence of and the efficacy of the sinking fund". (Wormell, National Debt in Britain. P. 41)