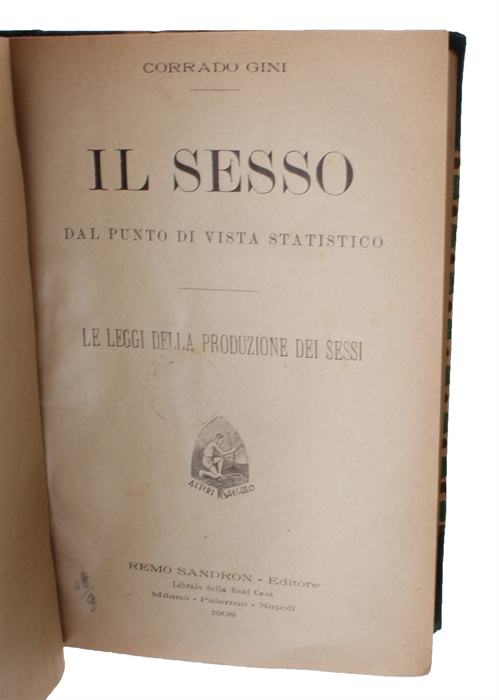 4to. Bound in contemporary half cloth with gilt lettering to spine. Title page with signs after a removed stamp. Otherwise a fine and clean copy. XXIX, (1), 517, (3), 16. + 54 numbered plates and 3 unnumbered plates.

First edition of Italian economist Gini's - particularly famous for the Gini coefficient - graduate thesis, and first published work, on gender from a statistical point of view, in which he for the first time introduced: "the hypothesis that the cause of differential birth rate could be reduced to the environmental influence on "germinal elements" (Cassata: Building the New Man: Eugenics, Racial Science and Genetics in Twentieth Century).

This work is a thorough review of the natal sex ratio, looking at past theories and at how new hypothesis fit the statistical data. In particular, it presents evidence that the tendency to produce one or the other sex of child is, to some extent, heritable.

"Animals kept in captivity demonstrated, according to Gini, that "the maturation of the germinal elements is obstructed by captivity, as it impedes muscular activity, makes the environment uniform, and greatly reduces the reaction of the organism." In the same way, in the human species, the "development of sex" appeared favored by those conditions - muscular work, "active rural life", sport - that "command in the organism, and through it, in the germinal cells, a lively reaction, which is obstructed on the other, by the opposite conditions of health and tranquility". This physiological reason could explain, therefore Gini's view, the lesser prolificacy of the aristocracy compared to the lower social classes and the decreasing rate of the "white races". (Cassata: Building the New Man: Eugenics, Racial Science and Genetics in Twentieth Century).

"Gini (1884-1965), perhaps best known to economists because of the Gini Coefficient, was born in Motta di Livenza, Italy. His doctoral thesis [The present], defended in 1905, was awarded the Vittorio Emanuele prize for social sciences. (The New Palgrave).