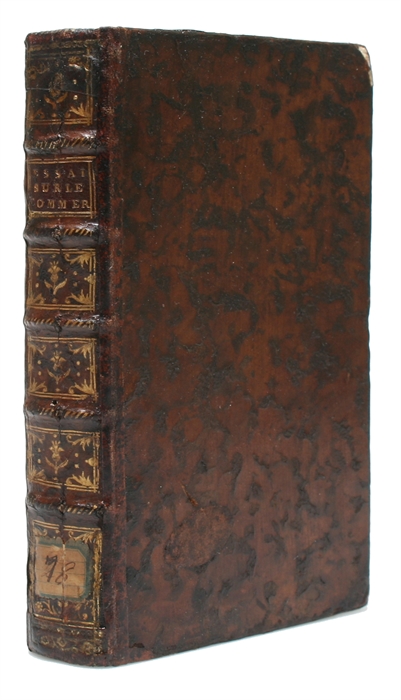 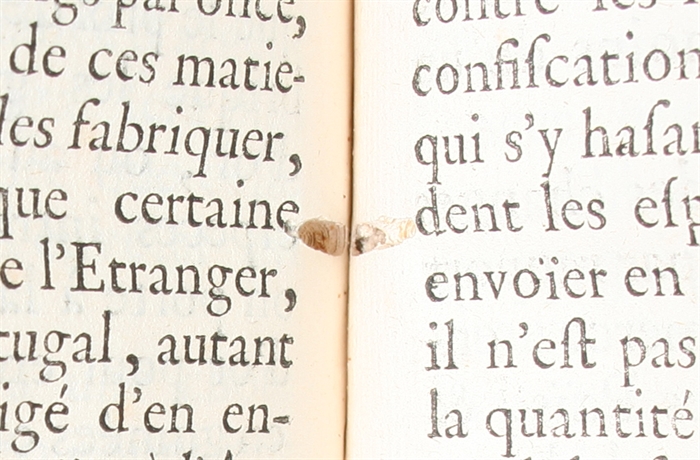 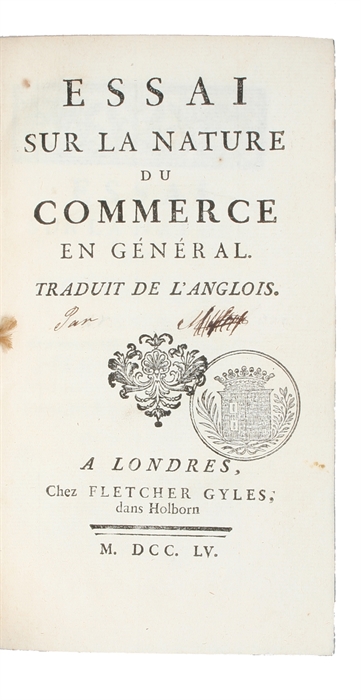 THE FOUNDATION OF ECONOMIC THEORY

12mo (binding ab. 17x10 cm). Bound in a very nice, contemporary full mottled calf binding with five raised bands to richly gilt spine. All edges of boards with a single gilt line-decoration. Beautiful marbled edges. Very neat and professional restorations to hinges and upper capital. A single tiny worm-hole to middle of spine and a supeficial, barely noticeable, crack down the middle. Old paper-label to lower compartment of spine. One corner a bit worn. Small ex libris to inside of front board, ex libris stamp to half-title. Contemporary owner's name crossed out at title-page. Internally exceptionally nice and clean. Small worm-hole to inner margin of about 60 leaves towards the end, only just touching the edge of a very few letters, otherwise not affecting lettering at all. (4), 430, (6, -Table des Chapitres) pp.

The exceedingly rare first edition of one of the most important and influential works of economic literature, as well as being one of the scarcest. The author is considered a pioneer of economic theory who anticipated and influenced the likes of Smith, Malthus, Turgot, Quesnay, Mirabeau, etc., etc. and this, his only published work (!), is considered the first actual work of theoretical economics, an absolutely ground-breaking work which by Jevons was characterized as the "Cradle of Political Economy".

Richard Cantillon (1680-1734), though his name is probably of Spanish descent, was an Irishman, and he spent most of his life in France. He was a man of secrecy, and little is known about his life and work. He wrote his only published book, the seminal "Essai sur la Nature du Commerce en Général" between 1730 and 1734 but never saw it published, as he was murdered in 1734 (when he was robbed and his house was set on fire, presumably by his former cook whom he had dismissed ten days earlier), and the book had to await posthumous publication. There is evidence that Cantillon wrote much more than this single work, but the "Essai" seems to be the only one that survived the fire in his house on the night of his death. The work was finally published for the first time in French, anonymously, in 1755, and it is not known whether Cantillon actually wrote the manuscript in French and that the mention of translation on the title-page is false (e.g. to avoid French censorship), or whether he wrote the manuscript in English and translated it into French himself; in all cases, the work circulated in French manuscript form, before it was published, and an English manuscript has never been found. "In any case, the "Essai" is a work of genious, and it was undoubtedly written by Cantillon" (Brewer, p. 19). After having had an immense influence on the Physiocrats and the French School, directly influencing Anne-Robert-Jacques Turgot , François Quesnay, Jean-Baptiste Say, Victor de Riquetti marquis de Mirabeau, Adam Smith, etc., the "Essay…" soon sank into obscurity only to be rediscovered by Jevons in the 1880'ies, and throughout the late 19th and the 20th century it has become increasingly evident that the present work is indeed a pioneering work, which directly and indirectly influenced almost all later economic theory.

"Richard Cantillon was a key figure in the early development of economics. He was one of the first to see economy as a single inter-connected system and to try to explain how it worked, and the first to present a coherent theory of prices and income distribution. He made major contributions to monetary theory and to the theory of balance of payments adjustment. The Physiocrats, writing only a few years after the (delayed) publication of Cantillon's one surviving work, the "Essai sur la nature du commerce en general", took many of their ideas very directly from it. Adam Smith probably learnt from Cantillon's "Essai" , as well as from the Physiocrats. There is thus a direct line of intellectual descent from Cantillon's "Essai" to Smith's "Inquiry into the Nature and Causes of the Wealth of Nations", and to modern economics." (Brewer, p. 1).

"Cantillon predated the Physiocrats in two ways. First, he used the term "entrepreneur" and emphasized the role of this figure in economic life. Business people, Cantillon said commit themselves to definite payments in expectation of uncertain receipts; this risk taking is remunerated by profit, which competition tends to reduce to the normal value of the entrepreneurs' services. Second, writing a generation before Quesnay constructed his "Tableau Economique", Cantillon stated: "Cash is therefore necessary, not only for the Rent of the landlord... but also for the City merchandise consumed in the country... The circulation of this money takes place when the Landlords spend in detail in the City the rents which the farmers have paid them in lump sums, and when the Entrepreneurs of the Cities, Butchers, Bakers, Brewers, etc. collect little by little the same money to buy from the Farmers in lump sums Cattle, Wheat, Barley, etc."
Cantillon developed a theory of value and price. His emphasis on the role of land and labor, on supply and demand, and on the fluctuations of price around intrinsic value makes him a direct forerunner of classical economists... Cantillon anticipated classical economic thought in several other ways. For example, he stated, "Men multiply like mice in a barn if they have unlimited Means of Subsistence." The classical economist Thomas Malthus held a similar view. Also, Cantillon analyzed interest as a reward for the risk taken in lending, based on profits that the entrepreneurs can make by borrowing and investing... In addition, Cantillon focused on the productivity of a nation's resources..." (Brue, pp. 59-60).