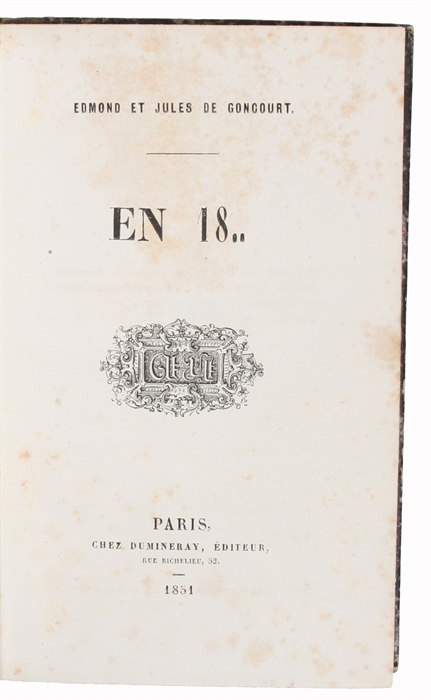 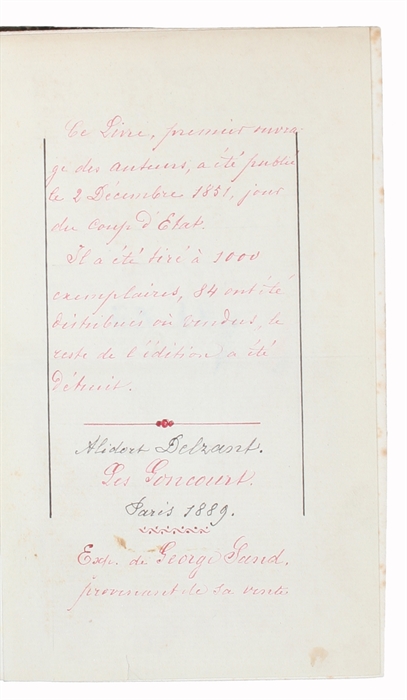 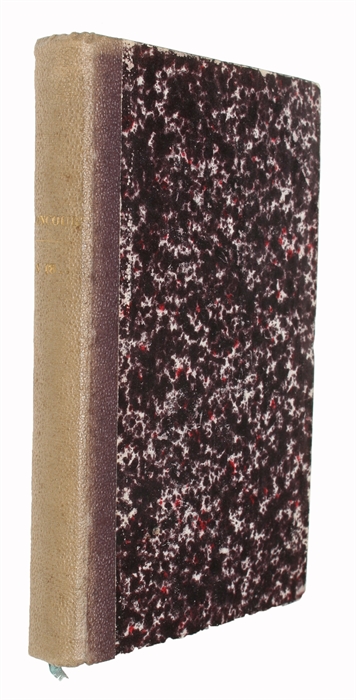 ONE OF 84 COPIES - GEORGE SAND'S COPY

Contemporary half cloth with gilt lettering to spine. Internally brownspotted (due to the paper quality). A page has been inserted on to the half-title, on which is explained, in a neat late 19th century hand, that the present copy is that of George Sand and that it comes from the sale of her belongings. The rest of the page contains bibliographical information on the work. Nice copy.

The extremely scarce first edition, one of merely 84 copies that were not destroyed, of the first work by the Goncourt brothers - the work that laid the basis for their unique joint authorship.

The famous brothers Edmond (1822-96) and Jules (1830-70) Goncourt played a unique role in 19th century French intellectual life. Together they developed a distinctive impressionistic style, called "écriture artiste"; their works are furthermore of great importance to the understanding of literary and social life of the period. They seminally influenced the naturalism and realism of 19th century literature - in the words of Émile Zola, they "provided a new sense of nature". The remarkable symbiosis in their collaboration, continuing to write as one until the death of Jules, has gone down in history as one of the most remarkable literary collaborations ever.

They are considered aesthetes of the highest rank and were known as great collectors of art. They were also known to be highly neurotic and utterly misogynist. During the Second Empire they frequented the salon of Princess Mathilde and took part in the famous 'dîners Magny', the fortnightly gatherings that brought together leading men (and George Sand!) of letters and science at a Paris restaurant in the 1860'ies.

In his will, Edmond left the entire Goncourt fortune to found the "Académie Goncourt", which began in 1903, when the prestigious Prix Goncourt was also founded.

Their first work, "En 18..", was printed in 1000 copies, but it was confiscated by the censors and was burnt by the authors. Consequently, a mere 84 copies survived and the work is thus of the utmost scarcity.

George Sand and the Goncourt brothers moved in the same intellectual and literary circles, were invited to the same places, the same salons, and had many friends in common. All three were seminal in determining the course of naturalistic writing of the 19th century.
Interestingly, also George Sand began her literary career in as a collaboration, in a liaison with the writer Jules Sandeau. They published a few stories in collaboration, signing them "Jules Sand", before she began writing on her own.