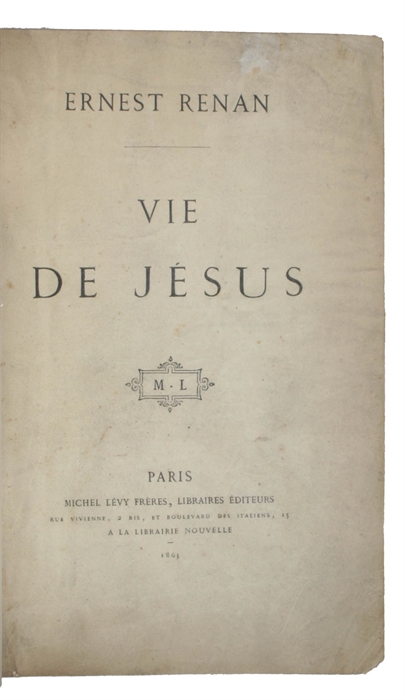 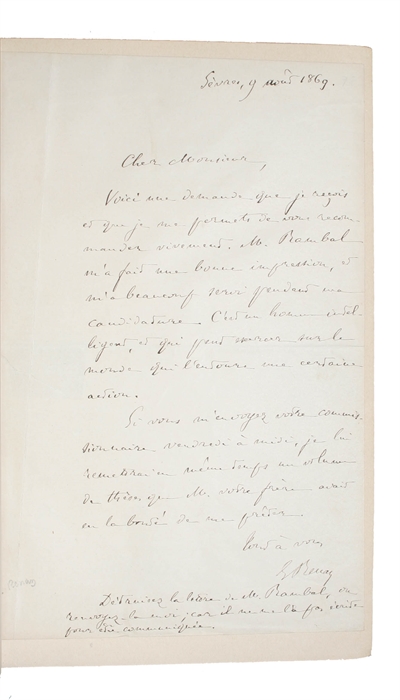 PMM 352 - THE HISTORICAL CHRIST - WITH ORIGINAL LETTER FROM RENAN

True first edition of this seminal classic on the life of Jesus, which caused an immediate scandal when it appeared. Rare with the original wrappers. Renan's masterpiece constitutes the first attempt to write a biography of Jesus the man and strongly puts forth the notion that the Bible too can be subject to historical investigation and critical scrutiny.

The 1 full page original handwritten and signed (E. Renan) letter is dated August 1869 is about a certain Mr. Bambal, who, Renan writes, has left made a very good impression on him and has been a great help during his candidacee. He praises him as an intlligent man. Renan furthermore mentions a book that he wishes to give to the brother of the addressee of the letter.

The work enraged the Roman Catholic Church but was an immediate success in most of Europe. "In six months sixty thousand copies of the French edition had been sold and edition succeeded edition. Renan regarded the book as the first of a series on the "Origins of Christianity", which he continued with "The Apostles" (1866), "Saint Paul" (1869), "The Anti-Christ" (1873), "The Gospels" (1877), "The Christian Church" (1879) and "Marcus Aurelius" (1881) but none of these emulated the success of the "Life of Jesus"... Immediate success was partly a "succès de scandale" but this would not have kept the book alive. It is Renan's approach to the subject and his beautiful prose that gave it lasting eminence." (PMM 352).

This groundbreaking work analyses the personality of the man Jesus, -a figure created by Renan out of his mind, but based on historical sources. "It is a pastoral idyll with the central figure a gentle, albeit oracular visionary, his power to work miracles a part of his unique personality -the son of man, but not the Son of God... In this great work it seems clear that the audience he has found was the one he sought: the general reading public rather than the limited coterie of scholars; and there is no doubt of the fact or the degree of his success." (PMM 352). "C'est le livre plus célèbre d'Ernest Renan (1823-1892) et le premier volume de l'Hisoire des origines du Christianisme"... on peut considérer cette "Vie de Jésus" comme une oeuvre de vulgarisation: l'auteur cherche à déterminer ce qui, au point de vue "scientifique", est de créance dans la vie du Nazaréen?" (Laffont-Bompiani IV:681).
Apart from causing a world-wide scandal, the work was also a world-wide success, and no matter how many harsh words can be said about the historical and religious contents of the work, there is no doubt about the fact that it influenced the destiny of Catholicism decisively and that it is a masterpiece of 19th century French literature. It is very elegantly written and is renowned for its description of the historical setting, charming descriptions of sceneries, its penetrating psychological analysis and its overall style and class. "Il faut ajouter que la "Vie de Jésus" compte au nombre des livres les mieux écrits de son temps; le charme de la peinture des paysages, le pittoresque géneralement exact des évocations historiques, l'analyse pénétrante de l'âme des personnages, des seductions du style enfin, n'ont pas été pour rien dans le succès universel de cette oeuvre." (Laffont-Bompiani IV:681).

Ernest Renan (1823-1892) was a French philologist, philosopher and historian. His father died when he was aged five, and his mother wanted him to become a priest. Until he was about 16 years old, he was trained by the Church, but due to his investigative and truth-seeking nature as well as his studies (e.g. Hebrew), he was in doubt as to the historical truth of the Scriptures, and with the help of his sister he chose his own path in life. "He studied intensively the languages of the Bible and filled a number of minor academic positions, frequently encountering difficulties because of the heterodoxy and outspokenness of his religious opinions." (Printing and the Mind of Man 352). In 1840 he began studying philosophy and later philology, in 1847 he took his degree as Agrégé de Philosophie and became master at the Lycée of Vendome. After having returned from a mission to Italy in the year 1850 where he gathered material for his historical-philosophical masterpiece, "Averroës et l'Averroisme", he was offered employment at the "Bibliothèque Nationale" (at the manuscript department). In 1861 he was chosen to become professor of Hebrew at the Collège de France, but because the emperor refused to ratify the appointment (inspired by the Clerical party), he was not established in the chair untill 1870. In 1878 he was elected for the Academy. Renan is considered a scholar of the greatest excellence and an impressive writer.