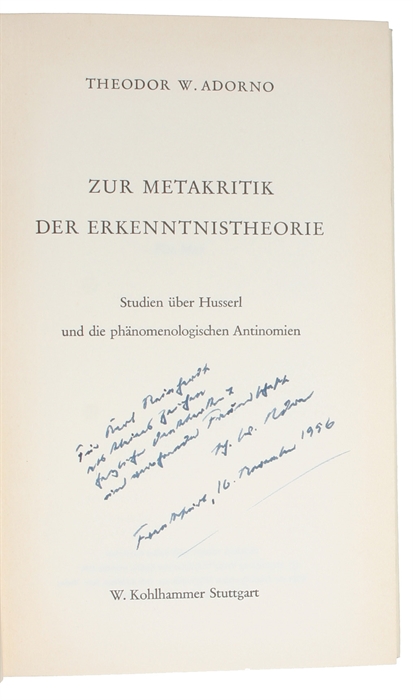 Most of text was written between 1934 and 1937, when Adorno was not allowed to teach in Frankfurt, but parts of the book were written shortly before the first printing of the book, in 1956.

The important and influential German philosopher and sociologist, Theodor Ludwig Wiesengrund Adorno (1903 - 1969), was a leading member of the Frankfurt School, together with e.g. Horkheimer, Benjamin, and Habermas. He taught philosophy at the university of Frankfurt, but as a Jew, his teaching position was taken from him in 1933. He went to Oxford to teach, and in 1938 he emigrated to America, where he was the leader of several sociological projects in both New York and Los Angeles. Together with Horkheimer he wrote the theoretical manifest of the Frankfurt School, the "Dialektik der Aufklärung". I 1949 he returned to Frankfurt, where he became professor of philosophy and sociology.

"Theodor W. Adorno was one of the most important philosophers and social critics in Germany after World War II. Although less well known among anglophone philosophers than his contemporary Hans-Georg Gadamer, Adorno had even greater influence on scholars and intellectuals in postwar Germany. In the 1960s he was the most prominent challenger to both Sir Karl Popper's philosophy of science and Martin Heidegger's philosophy of existence. Jürgen Habermas, Germany's foremost social philosopher after 1970, was Adorno's student and assistant. The scope of Adorno's influence stems from the interdisciplinary character of his research and of the Frankfurt School to which he belonged. It also stems from the thoroughness with which he examined Western philosophical traditions, especially from Kant onward, and the radicalness to his critique of contemporary Western society. He was a seminal social philosopher and a leading member of the first generation of Critical Theory." (SEP).

In this anti-epistemological work, Adorno deals with the more general question of the possibility of truth and of epistemology in principle ("die Frage nach Möglichkeit und Wahrheit von Erkenntnistheorie prinzipiell", Vorrede, p. 9), although the outer structure of the work is that of the philosophy of Husserl. Adorno comes to the conclusion that all epistemology is misguided, because it is based on some sort of "prima philosophia", an original or first principle, which cannot in reality be an absolutely first, because it is a concept, which is mediated.

Adorno's work became hugely influential throughout philosophical and sociological circles, and his "Zur Metakritik der Erkenntnistheorie" (translated as "Against Epistemology") counts as one of his most important works. "It inspired Habermas and Marcuse and continues to influence other eminent thinkers in philosophy and the social sciences today." (From the English language translation by Willis Domingo).