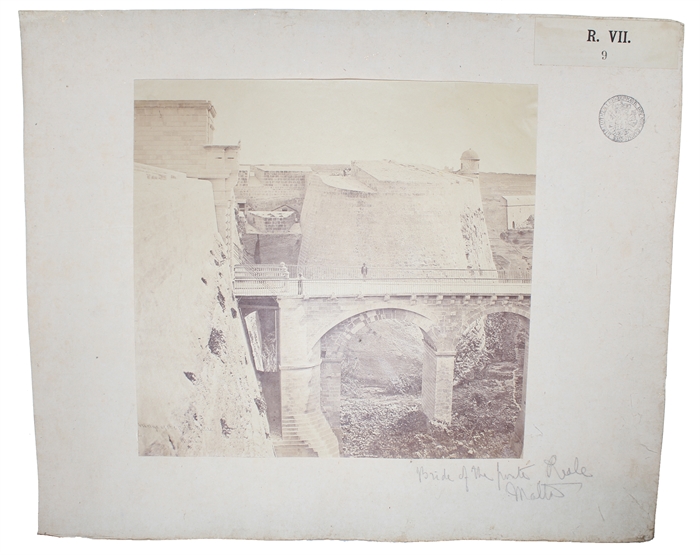 Original photograph of the Bridge of the Porta Reale, Valletta, Malta.

[Beato & Robertson, ca 1856.] Original photograph. Side view of entrance to Valletta (Porta Reale), with two men standing on the arched entry bridge, offering perspective on the scale of the buildings. Behind the bridge is part of the fortification. Salted paper measuring 25,3 x 26,2 cm. "bridge of the Porta Reale / Malta" in contemporary hand to lower left corner. Mounted on cardboard measuring 35,5 x 43 cm with stamp and paperlabel to upper right corner, do not touch the photograph.

Rare original photograph for the earliest part of Felice Beato's career where he worked closely with James Robertson, his brother-in-law. In 1853 Robertson began photographing with the British-Italian photographer Felice Beato and the two formed a partnership called Robertson & Beato either in that year or in 1854 when Robertson opened a photographic studio in Pera, Constantinople. Robertson and Beato were joined by Beato's brother, Antonio on photographic expeditions to Malta in 1854 or 1856.
"Felice worked especially closely with him [Robertson], consigning architectural views made in Malta and Constatinobel. We do not know when the collaboration between James Robertson and Felice Beato became a partnership. In some cases, some prints made from the same negative bear the signature "Robertson"; other bear the signature "Robertson & Beato", suggesting that Robertson was the author was the author of these negatives, and the prints were cosigned when the two men became equal partners." (Felice Beato, A Photographer on The Eastern Roas).