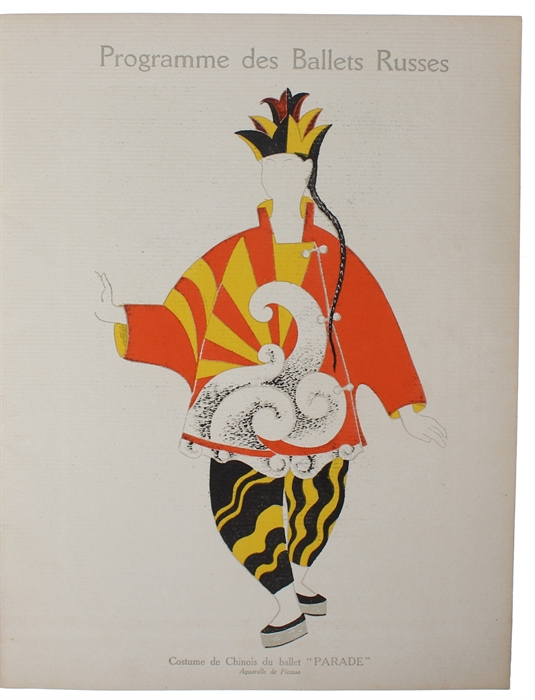 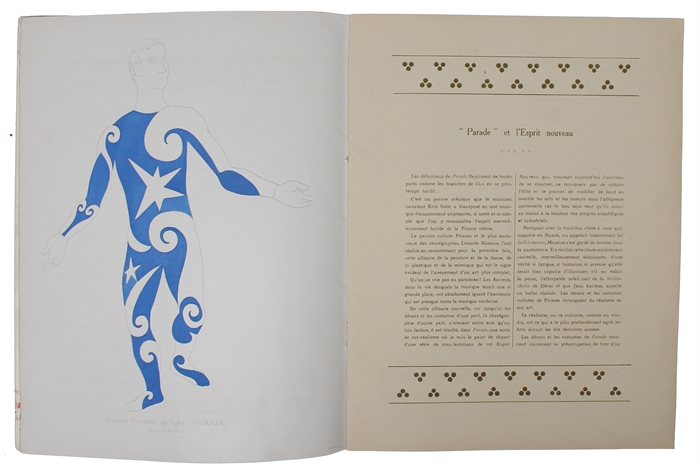 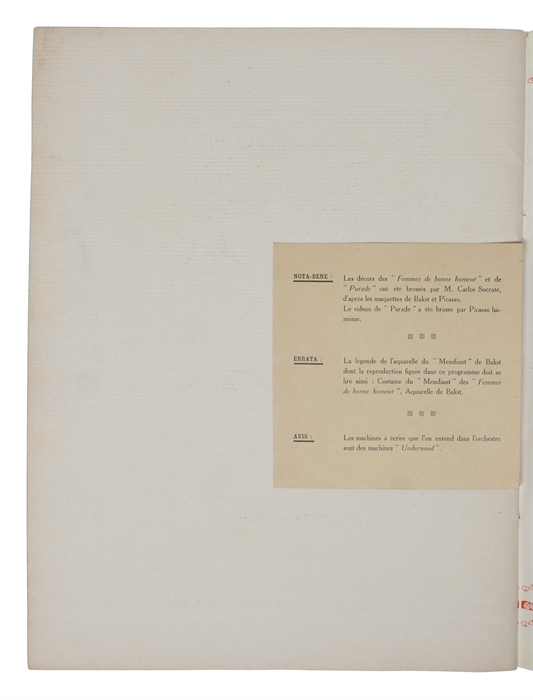 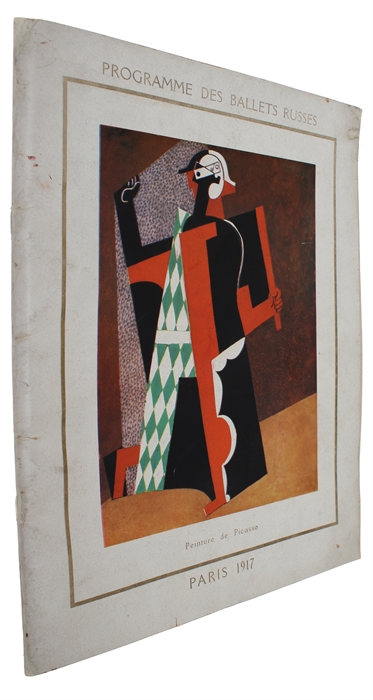 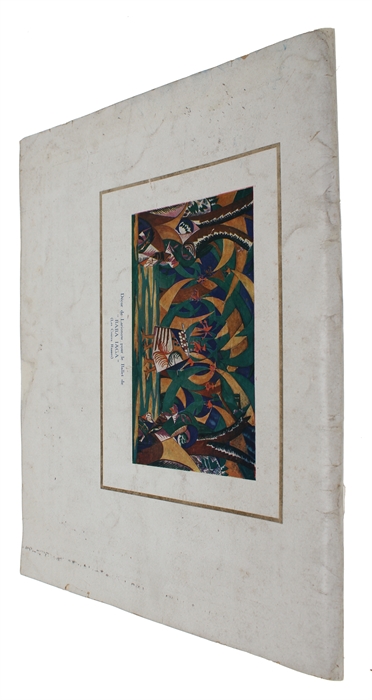 A bit of soiling to the extra-wrappers and small professional restorations to upper front cover and top of spine (this barely noticeable) as well as to blank margin of back wrapper. Apart from that, an excellent and very well perserved copy with only slight browning to some leaves.

Apart from the described wrappers and extra-wrappers, there are, in all, 24 leaves with -mostly photographic- illustrations (four of them with original hand-colouring on top) and 6 leaves of text.
With the original errata-leaf laid in loose, stating also that the illustrations "Femmes de bonne humeaur" and "Parade" have been hand-painted by Carlos Socrate, after the designs of Bakst and Picasso, and that the front wrapper for "Parade" (the Chinaman) has been handpainted by Picasso himself.

Scarce original printing of this seminal avantgarde-publication, the May 1917 "Théatre du Chatelet"- publication that presents Diaghilev's "Ballets Russes" in Paris - here containing the entire separate publication mainly devoted to Jean Cocteau's groundbreaking ballet "Parade" - being one of the most important publications in the history of modern art. It is here, in his presentation-article to "Parade" that Apollinaire coins the term "surrealism" and thus lays the foundation for the seminal cultural movement that Bréton came to lead. Furthermore, the ballet "Parade" represents a historical collaboration between several of the leading artistic minds of the early twentieth century: Erik Satie, Jean Cocteau, Pablo Picasso, Léonide Massine, and Serge Diaghilev, and is famous, not only for its contents and its music, but also for its magnificent costumes designed by Picasso, the drawings of which are presented in the present publication for the first time - most famously the front cover for the "Parade"-programme, which depicts the "Costume de Chinois du ballet "PARADE"/ Aquarelle de Picasso", an etching with original, stunning pochoir-colouring (hand-painted by Picasso himself!).

Several variants of this spectacular publication exist, but the one we have here is as original and complete as it comes, containing the entire contents of the different variants. We not only have the extremely scarce and fragile dust-wrapper and the equally scarce illustrated coloured double-wrappers (front: "Peinture de Picasso"; back: Décor de Larionow pour le ballet "BABA IAGA""), but also the entire 1917 "Théatre du Chatelet"-programme (in original illustrated wrappers) with the entire separate "parade"-issue -also entitled "Programme des Ballets Russes"- (also in original illustrated wrappers), with more than 20 leaves of photographic illustrations containing pictures of the actors and actresses, also in their spectacular avant-garde-costumes, Bakst's portrait of Leonide Massine, Picasso's portrait of Stavinski, Bakst's portrait of Picasso, Picasso and Massine in the ruins of Pompei, Picasso's drawings of a scene from "Parade" and of Massine, as well as several (mostly humorous) advertisements. But more importantly, we have, apart from the above-mentioned famous Chinaman by Picasso, in original pochoir-colouring, the other famous etching by Picasso "Costume d'acrobate du ballet "Parade"/ Aquarelle de Picasso", also in original pochoir-colouring (bright blue), the seminal presentation-article by Apollinaire, which coins the term "surrealism" (see bottom of description for full translation of this groundbreaking preface), the two "Les Femmes de Bonne Humeur"-figures by Bakst, Constanza and Battista, printed and heightened in gold (pochoir), the printed costume by Larionow, "Les contes russes", which is with original bright red and blue pochoir-colouring, and the "Le Mendiant"-costume by Bakst for "Parade", and, of course, the texts by Bakst (on choreography and décor), Georges-Michel (Ballets Russes after the War), as well as the texts for the various ballets (listing the actors and their rôles as well as a resume of the plot).

" "Tact in audacity consists in knowing how far we may go too far." Jean Cocteau, poet, writer, and arts advocate, made this statement in his 1918 manifesto, The Cock and Harlequin. Cocteau, in collaboration with Erik Satie and Pablo Picasso, discovered "how far" to "go too far" in the circus-like ballet Parade-one of the most revolutionary works of the twentieth century. Parade incorporates elements of popular entertainment and uses extra-musical sounds, such as the typewriter, lottery wheel, and pistol, combining them with the art of ballet. Cocteau wrote the scenario for the one-act ballet and contracted the other artists. Satie wrote the score to the ballet, first in a piano four-hands version and then in full orchestration, while Picasso designed the curtain, set, and costumes. Later, Léonide Massine, a dancer with the Ballet Russes, was brought in as the choreographer. Serge Diaghilev's Ballet Russes premiered the ballet Parade on May 18, 1917. The program notes for the ballet were written by the poet Apollinaire. They became a manifesto of l'esprit nouveau or "the new spirit" which was taking hold in Paris during the early twentieth-century. Apollinaire described the ballet Parade as "surrealistic," and in doing so created a term which would develop into an important artistic school." (Tracy A. Doyle, Erik Satie's ballet PARADE, p. 1).

When the French poet and army officer Guillaume Apollinaire wrote the program notes For "Parade", he created the manifesto of the "l'esprit nouveau" - "the new spirit". Cocteau had called the ballet "realistic", but Apollinaire took it an important step further and described it as "surrealistic", thus coining a term that would soon develop into an important artistic movement. With Picasso, Apollinaire had established the aesthetic principals of Cubism and was considered a leader in the European avant-garde.

"Definitions of Parade are blossoming everywhere, like the lilac bushes of this tardy spring...
It is a scenic poem transposed by the innovative musician Erik Satie into astonishingly expressive music, so clear and simple that it seems to reflect the marvelously lucid spirit of France. The cubist painter Picasso and the most daring of today's choreographers, Léonide Massine, have here consummately achieved, for the first time, that alliance between painting and dance, between the plastic and mimetic arts, that is a herald of the more comprehensive art to come.
There is nothing paradoxical about this. The Ancients, in whose lives music played such an important role, were totally unaware of harmony, which constitutes the very basis of modern music. This new alliance - I say new, because until now scenery and costumes were linked only by factitious bonds - has given rise, in Parade, to a kind of surrealism, which I consider to be the point of departure for a whole series of Manifestations of the New Spirit that is making itself felt today and that will certainly appeal to our best minds. We may expect it to bring about profound changes in our arts and manners through universal joyfulness, for it is only natural, after all, that they keep pace with scientific and industrial progress.
Having broken with the choreographic tradition cherished by those who used to be known, in Russia, under the strange name 'balletomanes', Massine has been careful not to yield to the temptation of pantomime. He has produced something totally new-a marvelously appealing kind of dance, so true, so lyrical, so human, and so joyful that it would even be capable (if it were worth the trouble) of illuminating the terrible black sun of Dürer's Melancholy. Jean Cocteau has called this a realistic ballet. Picasso's cubist costumes and scenery bear witness to the realism of his art.
This realism - or this cubism, if you will - is the influence that has most stirred the arts over the past ten years. The costumes and scenery in Parade show clearly that its chief aim has been to draw the greatest possible amount of aesthetic emotion from objects. Attempts have often been made to return painting to its barest elements. In most of the Dutch painters, in Chardin, in the impressionists, one finds hardly anything but painting. Picasso goes further than any of them. This is clearly evident in Parade, a work in which one's initial astonishment is soon replaced by admiration. Here the aim is, above all, to express reality. However, the motif is not reproduced but represented-more precisely, it is not represented but rather suggested by means of an analytic synthesis that embraces all the visible elements of an object and, if possible, something else as well: an integral schematization that aims to reconcile contradictions by deliberately renouncing any attempt to render the immediate appearance of an object. Massine has Adapted himself astonishingly well to the discipline of Picasso's art. He has identified himself with it, and his art has become enriched with delightful inventions, such as the realistic steps of the horse in Parade, Formed by two dancers, one of whom does the steps of the forelegs and the other those of the hind legs.
The fantastic constructions representing the gigantic and surprising features of The Managers, far from presenting an obstacle to Massine's imagination, have, one might say, served to give it a liberating impetus.
All in all, Parade will change the ideas of a great many spectators. They will be surprised, that is certain; but in a most agreeable way, and charmed as well; Parade will reveal to them all the gracefulness of the Modern movements, a gracefulness they never suspected.
A magnificent vaudeville Chinaman will make their imaginations soar; the American Girl cranking up her imaginary car will express the magic of their daily lives, whose wordless rites are celebrated with exquisite and astonishing agility by the acrobatin blue and white tights."