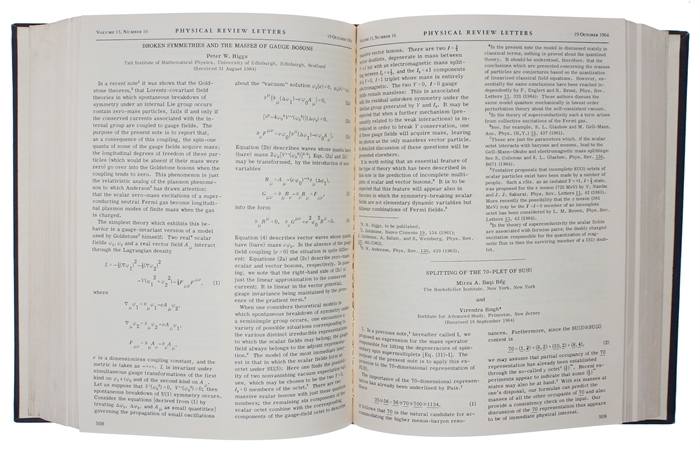 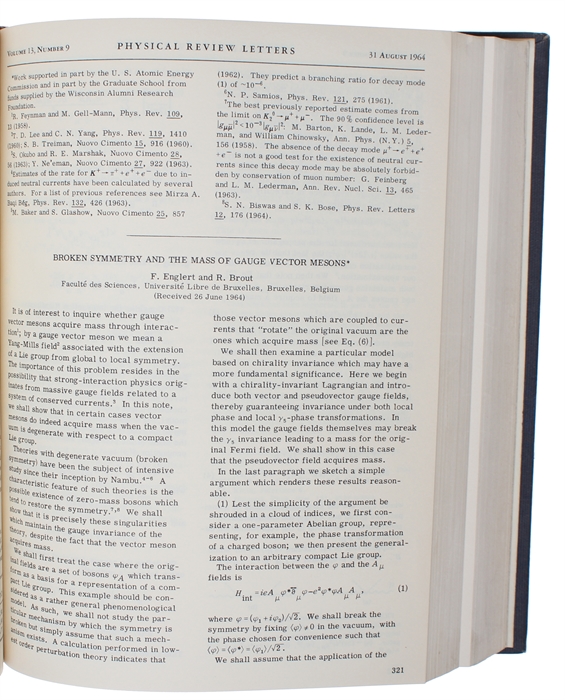 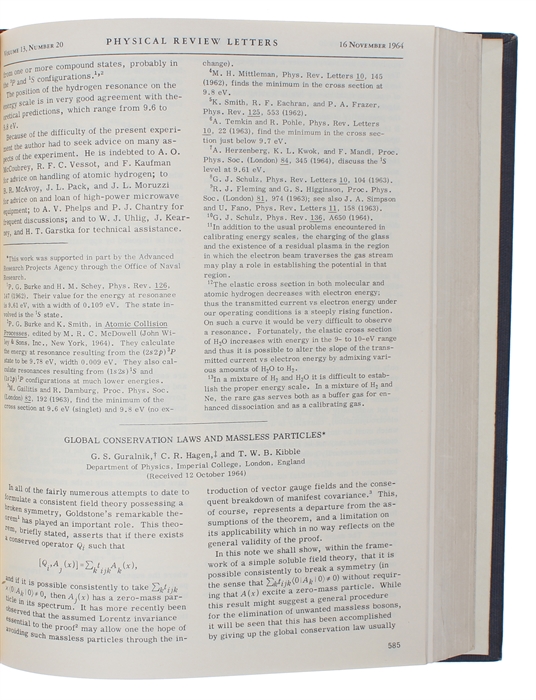 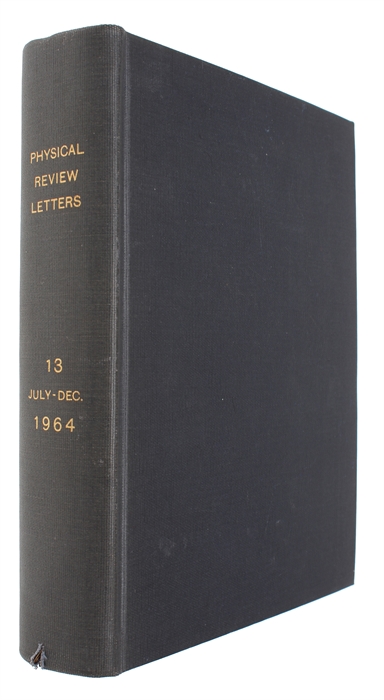 FIRST ANNOUNCEMENT OF THE HIGGS BOSON

First printing of these landmark papers of 20th century physics and cosmology; not only did they give a perfect explanation to why elementary particles acquire mass - the last building block of life itself - thereby completing the Standard Model of particle physics, they also initiated the most extensive and expensive search ever conducted in the history of science: the search for the Higgs boson, often referred to as the God particle.
One of the primary goals of the Large Hadron Collider (LHC) at CERN in Geneva, Switzerland - the most powerful particle accelerator and one of the most complicated scientific instruments ever built - is to test the existence of the Higgs boson and measure its properties which would allow physicists to confirm this cornerstone of modern theory. On 22 June, 2012 CERN announced that a newly discovered boson could be a Higgs boson, and it is widely believed by scientists to be very likely a Higgs boson.

The leading explanation is that a field exists that has non-zero strength everywhere - even in otherwise empty space - and that particles acquire mass by interacting with this Higgs field. If this is to be correct, a matching particle should also exist and be detectable, providing a crucial test of the theory. According to the Standard Model, the Higgs particle is a boson, a type of particle that allows multiple identical particles to exist in the same place in the same quantum state - thereby creating mass.

"In 1962, Goldstone's theorem had shown that spontaneous breaking of symmetry in a relativistic field theory results in massless spin-zero bosons, which are excluded experimentally. In a paper published in Physics Letters on 15 September 1964 (received on 27 July 1964), Peter Higgs showed that Goldstone bosons need not occur when a local symmetry is spontaneously broken in a relativistic theory. Instead, the Goldstone mode provides the third polarisation of a massive vector field. The other mode of the original scalar doublet remains as a massive spin-zero particle - the Higgs boson.
Higgs wrote a second short paper describing what came to be called "the Higgs model" and submitted it to Physics Letters, but it was rejected on the grounds that it did not warrant rapid publication. Higgs revised the paper and submitted it to Physical Review Letters, where it was accepted, but the referee, who turned out to be Yoichiro Nambu, asked Higgs to comment on the relation of his work to that of Francois Englert and Robert Brout, which was published in Physical Review Letters on 31 August 1964, the same day his paper was received. Higgs had been unaware of their work, because the Brussels group did not send preprints to Edinburgh. Higgs' revised paper drew attention to the possibility of a massive spin-zero boson in its final paragraph. During October 1964, Higgs had discussions with Gerald Guralnik, Carl Hagen and Tom Kibble, who had discovered how the mass of non-interacting vector bosons can be generated by the Anderson mechanism.

The search for the Higgs boson has become a major objective of experimental particle physics. Although the best fit to all the electroweak precision measurements gives its mass between 52 and 110 GeV, it has been excluded below 114 GeV. Its mass cannot exceed 1 TeV if the electroweak theory itself is to remain valid up to this energy scale, precisely the range that is being explored by CERN's Large Hadron Collider. Higgs' work has been a crucial step towards a unified theory of the forces of Nature and is the basis for an experimental programme which is guaranteed to discover new physics." (Peter Higgs and the Higgs Boson).