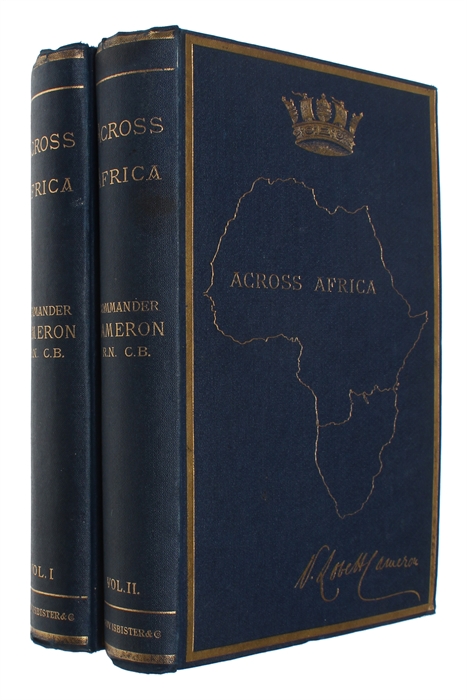 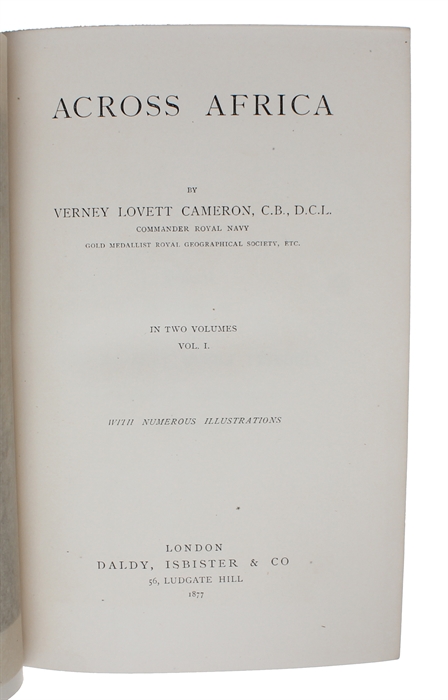 THE LIVINGSTONE RELIEF EXPEDITION OF 1873-75

8vo. 2 volumes, both in the original pictoral cloth. Light wear to to of spines. Bookseller labels to lower inner margin of pasted down front end-papers in both volumes. Contemporary ownership inscriptions to half-titles. A fine and clean copy. XVI, 389, [4, advertisements]; XII, 366, 8 [advertisements]; numerous wood-engravings. including 29 full-page, 4 tinted facsimile letters including 3 folding and 1 large folding map in rear pocket to volume one.

First edition of Cameron's famous account of his journey from the east to the west coast of Africa, containing valuable suggestions for the opening up of the continent, including the utilization of the great lakes as a Cape to Cairo Road connection. In recognition of his work he was promoted to the rank of Commander.

Cameron is remembered for being the first European to traverse tropical Africa from east to west. The son of an English clergyman, he entered the British navy at the age of thirteen and over the next dozen years saw active service in the Mediterranean, the Gulf of Mexico, the East Indies, and East Africa. His experience in Africa inspired his determination to aid in the suppression of the slave trade. He volunteered his services to the Royal Geographical Society to search for the missing missionary David Livingstone; however, when Henry Morton Stanley located Livingstone before an expedition could be organized, the RGS decided to send Cameron on an aid mission instead.

"After extensive delays and great difficulties hiring carriers, Cameron's expedition headed inland from Kikoka(Tanzania) in late March 1873. In October in Tabora, 500 miles inland, and still recovering from a case of severe tropical fever, Cameron learned of Livingstone's death-his body arrived a few days later. While Cameron's European companions joined the entourage bringing Livingstone's body back to the coast, he pushed on tirelessly, from the fall of 1873 through the fall of 1875, and succeeded in crossing the continent. In route, he extensively surveyed Lake Tanganyika and arranged to have Livingstone's belongings and journals shipped back to England from Ujiji. Hostile Arab traders prevented him from following a route that would allow him to confirm his belief that Livingstone's Lualaba River was a tributary not of the Nile but of the Congo, and he was forced instead to seek a southeasterly course through the watershed between the Congo and the Zambezi rivers. Crossing the present-day Democratic Republic of the Congo, Cameron arrived in Katombéla (on the northern coast of today's Angola) on 7 November 1875. He was stricken with scurvy and would not have survived, he said, if the disease had struck a few days earlier inland. Carried on a hammock to Benguella, he was cured by a French hospital doctor. Back in England in April 1876, he received great acclamation and the Founder's Medal of the RGS for "the promotion of geographical science and discovery." (Princeton.edu).

His published work contained valuable suggestions for opening up the continent to commerce and using that means to eradicate the slave trade.