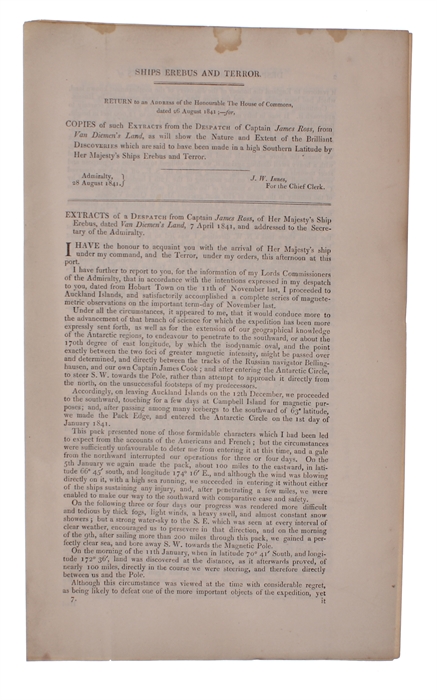 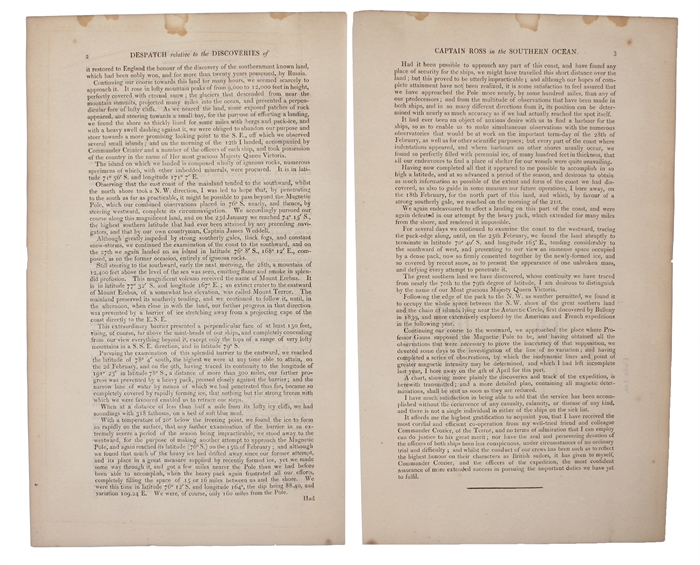 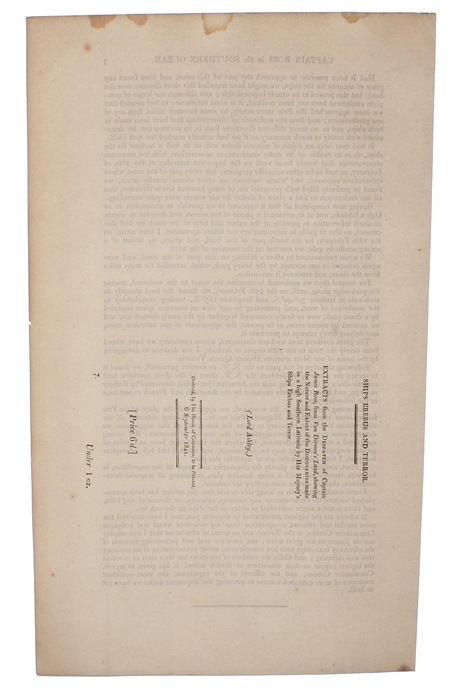 London, Ordered by the House of Commons, to be Printed, 6 September, 1841.

The rare first edition of the first published report of Ross's discovery of the Antarctic continent - “This is the first report of the first season's stupendous geographical discoveries, composed of extracts from Ross's dispatch sent from Australia, 7 April 1841, upon the expedition's return from the Ross Sea... How many copies of this remarkable publication were printed is uncertain.[…] Certainly very few exist today” (Rosove).

The expedition inferred the position of the South Magnetic Pole and made substantial observations of the zoology and botany of the region, resulting in a monograph on the zoology and a series of four detailed monographs by Hooker on the botany, collectively called Flora Antarctica and published in parts between 1843 and 1859. The expedition was the last major voyage of exploration made wholly under sail.

Ross sailed south for the Antarctic in October 1839 in command of the Erebus and Terror, the aim being to find the south magnetic pole. This was to be part of Britain's contribution to an international year of co-operation, whereby European nations would set up magnetic observatories around the world, coordinating readings on fixed dates; comparing readings, he would also attempt to reach the South Magnetic Pole.

The expedition was extremely well equipped by any standards. There were stores for three years including large amounts of vegetable soup, pickled cabbage and carrots to keep scurvy at bay. There were ice saws, portable forges, winter clothing for every man and even a small flock of sheep. Each ship held a crew of sixty four.

The ships did not handle well (partly because of the shallow draft), though they represented the epitome at the time of naval ingenuity. No sailing ships before or since that time were better prepared for their task with such fine attention to detail.

The two ships returned to the Falkland Islands before setting off for the south again in December 1842 to explore the Antarctic Peninsula. But they did not get as far as they had done previously. They arrived back home on the 4th of September 1843, four years and five months after setting off. Data had been gathered on magnetism, oceanography and substantial botanical and ornithological specimen collections had been made. It was to be the last major voyage of exploration made entirely under sail.

Ross returned to England triumphant and to receive a knighthood. Despite his findings, no-one but whalers and sealers would follow for many years. It was now known that the Antarctic continent existed and was prodigious in size, but it would be fifty years before any attempt was made to explore the land surface.

The two wessels HMS Erebus and HMS terror were designed as "bomb ships" for the naval bombardment of shore targets but refitted for exploration in icy waters. Both ships were abandond and consequently lost during the ill-fated attempt to force the Northwest Passage in 1845 during the Franklin-expedition.