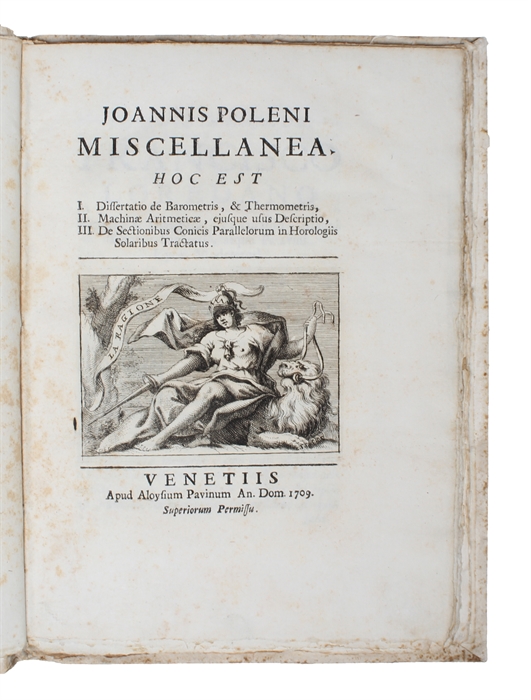 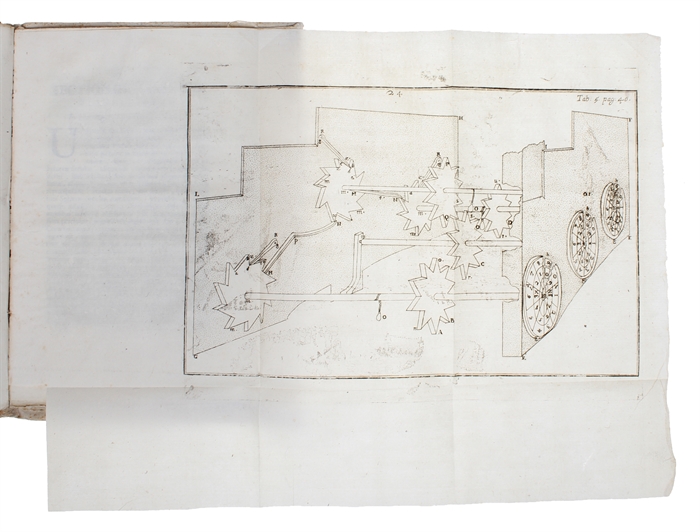 "THE FIRST DETAILED PRINTED DESCRIPTION OF A MECHANICAL CALCULATING MACHINE"

The very rare first edition of Poleni's first published work, containing - among other things - his seminal treatise on his arithmetic machine, which constitutes the first constructed calculating machine with gears with a variable number of teeth (i.e. pin-wheel). "Poleni designed a machine organized around a new principle for the multiplying mechanism: the variable cogwheel. A large, wooden structure, Poleni's machine looked like a clock. He published in 1709 a detailed, illustrated description of the internal mechanism, the first detailed printed description of a mechanical calculating machine." (Matthew L. Jones, Reckoning with Matter, p. 130).

The plates in the "Miscellanea" depict the calculator and constitute the only original presentation of it that still exists, as none of the two models that Poleni himself built (and mentioned in the preface to his work) have survived.

"Having heard and read of the machines of Pascal and Leibniz, Poleni designed a calculating machine based on the principle of the pinwheel to overcome the shortcomings of these earlier calculators. He built a hardwood model, intended as a gift for the emperor, but decided to destroy it when he learned that a Viennese mechanic named Brauer had anticipated him by presenting the Emperor with a somewhat simpler machine." (Tomash). This is the story that is most frequently repeated about the legendary Poleni-calculator. But this seems not to be a certain fact. It is possible that the machine(s) merely disappeared or were destroyed some other way. The story stems from Jean de Fouchy Pajil Grandjean, who, in the first biography of Poleni ("Eloge de Jean POLENI, Marquis du St. Empire", 1762), claims that "...having heard that Mr Brawn, a famous mechanic in Vienna, presented a similar machine to the Emperor, Poleni destroyed his machine and no more wanted to rebuild it." The same story is then repeated in the two subsequent Poleni-biographies (Cossali (1813) and Gennari (1839)). This however, is not corroborated by anything else we know about Poleni, and even though Fouchy specifically mentions the German mechanic, constructor and optician Anton Braun, who worked in Vienna for the court and who did in fact present his own calculating machine (which was based on the pin-wheels of Poleni and Leibniz) with great success to the Emperor, this only happened as late as in 1727 - 18 years after Poleni described his calculating machine in his first published work. It is most likely that Anton Braun had actually read Poleni's "Miscellanea" and then decided to use Poleni's ideas for a calculating machine in his own construction.

According to Poleni himself, two wooden copies of his calculating machine were made. He states the following in the introductory notes to the chapter on the machine:
"Having heard several times, either from the voice, or from the writings of scientists, which were made by the insight and the care of the most illustrious Pascal and Leibniz, two machines which are used for arithmetic multiplication, which I do not know the description of the mechanism, and I do not know if it was made manifest, I wanted and guess with thought and reflection to their construction, to build a new one that implement the same purpose... By a happy chance, I designed a machine with the use of which even a novice in the art of calculation, provided that knows the figures, can perform arithmetic operations with his own hand. So I am worried that it was made of wood, as I had planned and that, although initially built with poor precision, showed that this was achievable, rather than made. Therefore, I have recreated the machine from scratch, building it of the hardest wood, with all possible attention and the work done has not failed in vain."

A description of Poleni's calculator appeared in 1727 in Leupold's "Theatrum arithmetico geometricum" and in 1804 in Johann Bischoff's "Versuch einer Geschichte der Rechenmaschine". Several replicas of the machine has been built in modern times (one still being in the Museo Nazionale della Scienza e della Tecnica, Milano). IBM was so intrigued by Poleni's calculating machine that they too tried to reconstruct it. IBM still has this replica that is used for display purposes.

Poleni's first work, "Miscellanea" was essentially a sort of doctoral thesis to obtain a University appointment. It earned him Isaac Newton’s (1642-1727) support to become a member of the Royal Society of London and the Chair of Astronomy and Meteorology at Padua University. Apart from the treatise on his calculating machine, the work includes dissertations on barometers, thermometers, and conical sections in sundials.

Poleni's proposition of unedited variants of differential and integral calculus gained him Leibnitz’s interest and support for his election as a member of the Academy of Sciences of Berlin, resulting in Poleni’s accreditation in the European context.

The Pinwheel calculator would later prove an extremely important invention that about 150 years after Poleni's original invention revolutionized trademanship and, more generally speaking, the history of mechanics and computing.