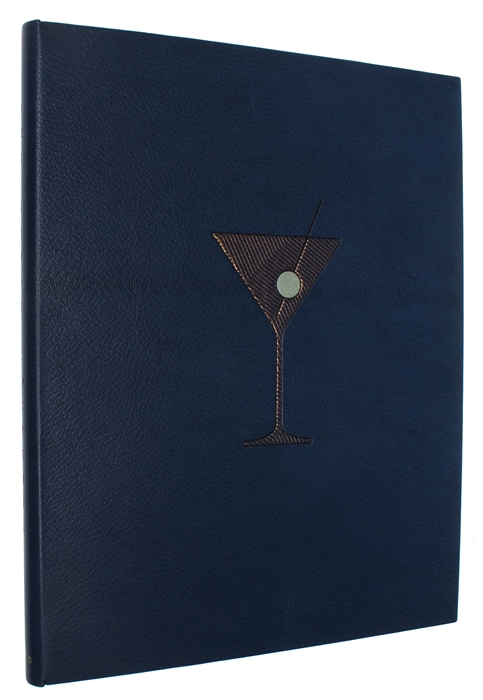 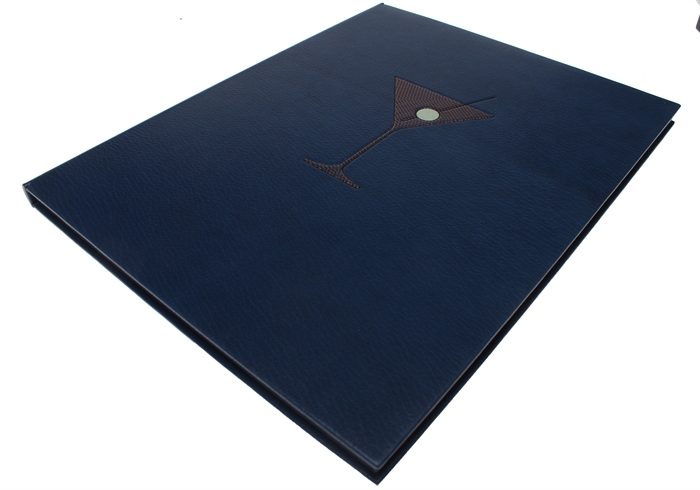 Small folio (30,4 x 23,7 cm). The entire May 13th issue, consisting of four leaves, with a blue marbled paper back-strip housed in magnificent custom-make full morocco box of Prussian Blue goatwith a morocco-onlay of an iconic cocktail-glass on the front board. The cocktail-glass is richly gilt with a geometric pattern in art-deco-like style and with an onlay of turquoise green representing and olive, with a black stick through it. Black lettering ("THE FIRST COCKTAIL") to the spine and the year "1806" turquise to the foot. Beautiul light blue- and gold patterned silk-lining to the inside.

A bit of brownspotting and some of the print a bit vague, due to the paper quality.

Exceedingly scarce first printing of the May 13th 1806-issue of "The Balance and Columbian Repository", in which we find the very first published definition of the word cocktail, the earliest reference of the word "cocktail" as we know it. This seminal issue of the now rather obscure paper constitutes the most important event in cocktail history. It is here that we find the earliest definition of the word cocktail and here that we find the first cocktail recipe ("a stimulating liquor, composed of spirits of any kind, sugar, water and bitters...").

" The very first published definition of the word "cock-tail" appeared on 13th May 1806 in The Balance and Columbian Repository in 1806 and this historic event is now commemorated every year by World Cocktail Day." (31 Dover - History of the Cocktail Blog)

"...the Balance article is the earliest written record that not only mentions the word "cock-tail" but also gives the recipe, so it's appropriate that theirs is the piece we celebrate on World Cocktail Day." (saveur.com, How the Cocktail got its Name).

"World Cocktail Day is a celebration of cocktails around the globe, marking the publication date of the first definition of a cocktail on May 13th in 1806...

New York tabloid 'The Balance and Columbian Repository' defined a cocktail as "a stimulating liquor, composed of spirits of any kind, sugar, water and bitters..." in response to a reader's question. A cocktail, as we know it, is used to refer to a drink that contains two or more ingredients with at least one of in the ingredients alcohol. The word 'cocktail' has now become embedded in our drinking vocabulary as the drinks are widely accessible with their ingredients easy to adapt to suit every taste." (worldcocktailday.co.uk).

"No one knows when or where the first drink called a cocktail was mixed. But 200 years ago today a full-blown description of a "cock-tail" first made it into print, an anniversary being commemorated by the Museum of the American Cocktail with events in Las Vegas and New York.
According to the Oxford English Dictionary, the word "cocktail" first appeared in 1803 in a publication called the Farmer's Cabinet, but there was no explanation of what sort of drink this cocktail was, other than that it was "excellent for the head." On May 6, 1806, the word turned up again -- this time in hyphenated form -- in the Balance and Columbian Repository, a Federalist newspaper in Hudson, N.Y., where it figured in one of the paper's regular jibes at the party of President Thomas Jefferson.
"Rum! Rum! Rum!" read the headline in that paper. "It is conjectured, that the price of this precious liquor will soon rise at Claverack," the Balance wrote, given that a candidate there for the state Legislature must have used up the town's stocks of alcohol in a frenzy of boozy vote-buying. According to the Balance, the candidate had served up 720 rum-grogs, 17 dozen brandies, 32 gin-slings, 411 glasses of bitters and 25 dozen "cock-tails." But all this generosity with refreshment was for naught, the newspaper teased, as the candidate lost.
No description of those 300 cock-tails there. But then a reader of the paper inquired, writing that he had heard of a "phlegm-cutter and fog driver, of wetting the whistle, of moistening the clay, of a fillip, a spur in the head, quenching a spark in the throat," but "never did I hear of cock tail before." On May 13, the editor of the Balance responded that he made "it a point, never to publish anything (under my editorial head) but which I can explain." A cock-tail is "vulgarly called a bittered sling," he explained to his readers. That is, the drink is "a stimulating liquor, composed of spirits of any kind, sugar, water and bitters." (Eric Felten: The Cocktail Bicentenniel. In: The Wall Street Journal May 13th, 2006).