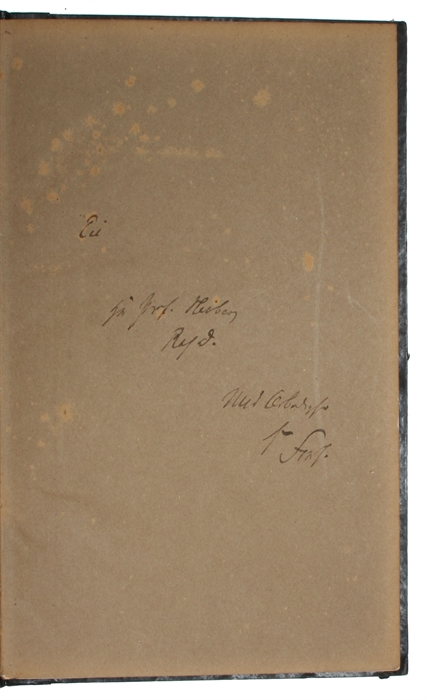 "Ypperstepræsten" - "Tolderen" - "Synderinden", Tre Taler ved Altergangen om Fredagen. ["The Highpriest" - "The Publican" - "The Woman, which was a Sinner", Three Speeches at Communion on Friday].

First edition, presentation-copy, of Kierkegaard's "The Highpriest - The Publican - The Woman, who was a Sinner", which is part of Kierkagaard's upbuilding production, written and published under his own name.

The original handwritten presentation is written on the front free end-paper, as usual, and is "Til/ Hr. Etatsraad Heiberg/ R. af D./ Med Ærbødighed/ fra/ Forf." [For /Mr. Councillor of State Heiberg/ R. of D. (i.e. Knight of Dannebrog)/ With reverence/ from/ the author].

This copy was one of four presentation-copies exhibited at the memorial exhibition of Kierkegaard at the Royal Library of Copenhagen in 1955. See Søren Kierkegaard, Mindeudstilling, nr. 108.

The three Communion-speeches are theologically centered around the meaning of substitution, the dialectic of self-delusion and the transformation of the subject by conversion.

Johan Ludvig Heiberg (1791-1860) was the main cultural figure of the 19th century in Denmark. He hugely influenced all of Danish culture within this period, and he must be considered the patron of Copenhagen's literati. He was very influential as a thinker in general, and he changed Danish philosophy seminally by introducing Hegel to the Northern country. As thus there is no doubt as to the rôle that Heiberg directly or indirectly played in the life of Kierkegaard, and this is a presentation-copy that links together two of the giants of Danish culture. Kierkegaard viewed himself as somewhat of an outsider, and it was of great importance to him to try and enter the famous literary and cultural circle of Heiberg.

Søren Kierkegaard, the father of existentialism, became of seminal importance to not only Danish thought, but worldwide, as one of the most important thinkers of his time. He seminally influenced the fields of philosophy, theology, psychology and literature, and not only did he found what is known as existentialism and attempt to renew Christian faith with Christendom, with his influential and controversial critiques of Hegel and the German romantics, he also changed the course of philosophy of the second half of the 19th century.