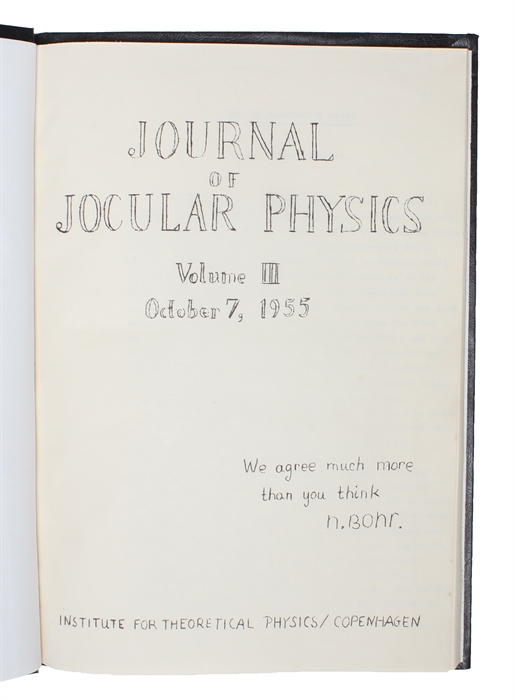 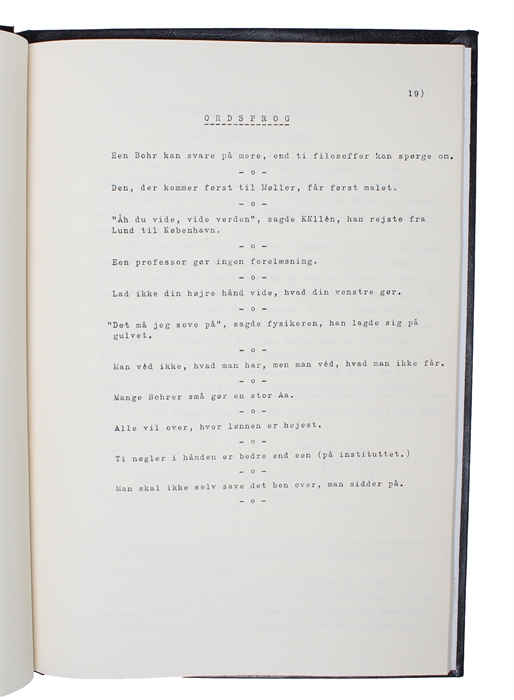 "THIS IS THE ATOM THAT BOHR BUILT"

Copenhagen, Institute for Theoretical Physics, 1955. Small folio (A4). Bound in a simple black faux-leather binding. Some spotting from paper remains to back board. Otherwise fine, clean, and fresh. Stenciled manuscript. 48 numbered leaves with printing on rectos only. Illustrated.

One of the few scarce original stenciled copies of the "Journal of Jocular Physics, Vol. III," the 1955-volume of the privately circulated amateur-comedy-journal that Bohr's students made on the occasions of Bohr's most important birthdays (beginning with his 50th in 1935), in this case his 70th. The "Journal" is an eclectic blend of funny and clever stories, songs, poems, aphorisms, humorous descriptions of recent developments in physics, etc., all written in an informal tone with the underlying subject being Bohr's birthday.

Since 1929 most of the greatest physicists of the 20th century had been gathering around Niels Bohr for a conference in Copenhagen at the Bohr Institute. Since 1931 this conference had also included a skit prepared by the youngest of the participants, the "Copenhagen Faust" of 1932 being the most famous and important of them. It is this skit that later develops into the "Journal of Jocular Physics" which was prepared and compiled for Bohr's 50th, 60th and 70th birthdays, the first in 1935, the second in 1945, and the third (the present) in 1955. The 1955 "Jocular Physics" was the last of them.

"The early decades of the present century witnessed the heady development of the Quantum Theory of the atom, and during that era the roads of theoreticians of all nationalities led, not to Rome, but to Copenhagen, the home city of Niels Bohr, who was the first to formulate the correct atomic model. It became customary at the end of each spring conference at Blegdamsvej 15 (the street address of Bohr's Institute of Theoretical Physics) to produce a stunt pertaining to recent developments in physics.
However Copenhagen was also the home of abundant humor. As a respite from the intensive and highly competitive efforts taking place to characterize fundamental interactions on an atomic scale, physicists took the time to develop satirical letters, articles, plays and other works." (Gamow, Thirty Years that Shook Physics, pp. 167-68).

In his Report at the Niels Bohr Archive Symposium, "Copenhagen' and beyond: Drama meets history of science", Yu.V. Gaponov accounts for the history of "physical art": "The 1950s and 1960s were the golden age of the utmost prosperity in Physics. The atomic revolution having opened for the scientists a new world of quanta led soon to the nuclear fission discovery and to the first steps in techniques to dominate the atomic energy. The realization of national atomic programs which first took place in USA and then in Russia (USSR) and Great Britain had attracted the whole world's attention and placed Physics and the natural sciences in general in a top position. Being concerned with matters of physics became then exclusive and prestigious and physicists as individuals attracted the society's attention. They became heroes of literature, theater, movies, press. This process was observed in many advanced countries. It was also typical for the former USSR of those times, although owing to special social circumstances it had acquired some particular forms. One such form was the creation of "Physical Art" traditions... The birth of these traditions is commonly associated with the appearance at MSU PhysFac in 1960 of a Student Humor Festival called "Birthday of Archimedes" (later "Physics Day") along with a comic buffoonery opera "Archimedes" (authors - physicists and poets V. Kaner, V. Milyaev). However, MSU physicists consider the "Physical Art" traditions to have started earlier. Here are some remarkable milestones:
In 1932 the well known "Faust" jocular opera and in 1935 the special issue of the "Jocular Physics" journal were written by some eminent physicists in connection with the 50th birthday of Niels Bohr."

The present 1955-volume contains numerous very funny contributions by physicists around Bohr, all based on physics humour, physics word-games etc. We have for instance "A Voyage to Laplacia" by L. Rosenfeld, a "Confidential" report "Standardization of (physics) Papers" by J. Lindhard,"Broken English" by H.B.G. Casimir ("There exists today a universal language that is spoken and understood almost everywhere: it is Broken English. I am not referring to Pidgin English a highly formalized and restricted branch of B.E. but to the much more general language that is used by waiters in Hawai, prostitutes in Paris and ambassadors in Washington, by business-men from Buenos Aires, by scientists at international meetings and by dirty-postcard-peddlers in Greece, in short honourable people like myself all over the world..." (p. 14), aphorisms (like: "One Bohr can answer more questions than 10 philosophers can ask", ""I will have to sleep on that" the physicist said, he lay down on the floor", etc.), "A Remarkable "V-event"" by M. Sheep, "The Heart on the other Side" by G. Gamow (""But father will never give his consent... He is looking for a son-in-law who can help him in his business, and eventually take it over. You can't possibly qualify for that, can you?" "No, I guess I can't," agreed Stan Situs sadly. "I cannot possibly see how the kind of mathematics I am doing or, in fact, ANY kind of mathematics can help the production and selling of shoes..."), the poem "The Atom that Bohr Built", etc.

The "Journal of Jocular Physics" is an important document portraying both one of the main physical centres of this physically important period and how one of the greatest scientific minds of the 20th century was viewed by his students and collaborators - as being not only brilliant in his field of research but also as a funny, likeable and sympathetic person.

See also:
Gino Segrè. Faust in Copenhagen. A Struggle for the Soul of Physics and the Birth of the Nuclear Age."Pimlico, 2008.
George Gamow. Thirty Years that Shook Physics. The Story of Quantum Theory. New York, 1966.