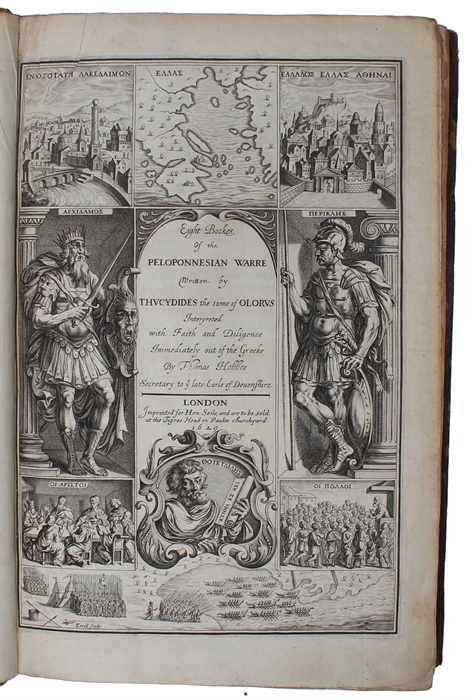 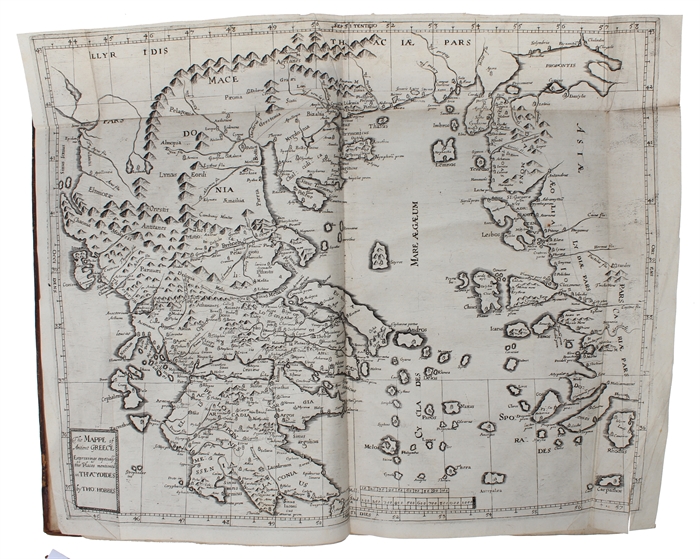 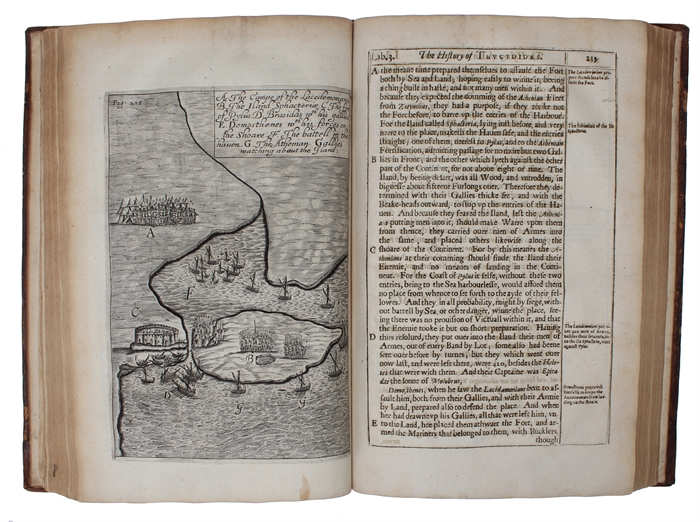 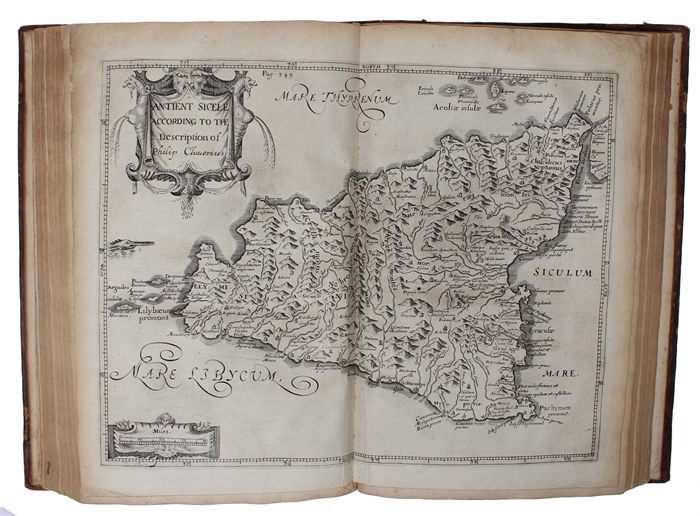 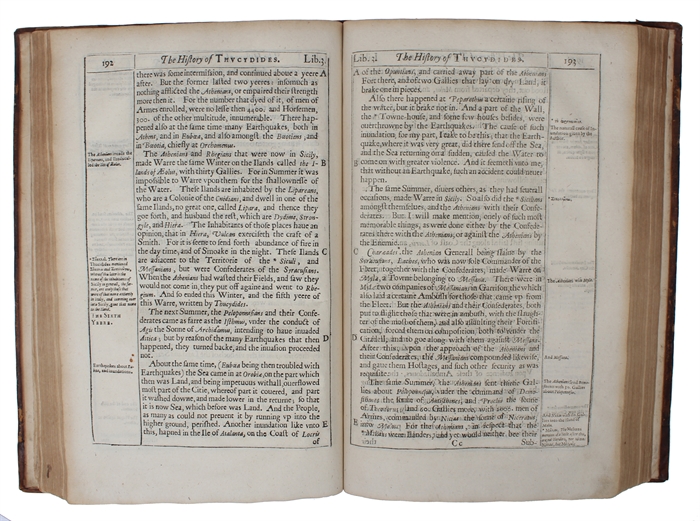 Eight Bookes of the Peloponnesian Warre. Interpreted with Faith and Diligence Immediately out of the Greeke by Thomas Hobbes.

Folio. Contemporary full brown calf with six raised bands, gilt line-decoration and gilt title-label to spine. Triple blindstamped borders to boards. Restored at hinges, capitals and corners, with leather slightly lighter than the original calf. With the large armorial book-plate of Robert Biddulph Phillipps Esq., Logworth Herefordshire to inside of front board as well as Phillips Libarry book-plate of St. Michael's Monastery, Belmont. A few creases to the first leaves. A(1)r darkened and dusty, and last leaf of The Table slightly darkened. Overall a very good copy. Woordcut hear- and tail-pieces and large initials. Printed within lined borders. The folded map with a tear towards outer right corner, no loss. Engraved illustrated title-page (in ten compartments with figures and scenes, by Cecill) + 32, 536 (recte: 535), (10) pp. + 2 engraved plates and three large engraved maps, one folded, two double-page.

Very scarce first edition, first issue of Hobbes’s first published work, being his seminal translation of Thucydides’ Eight Books on the Peloponnesian War, also constituting the first translation of the work into English from the original Greek.

The work is of the utmost importance to the development and shaping of political modernity and lies at the heart of Hobbes’ civil science. As Robertson says, “For Thucydides, Hobbes’s early preference amounted to a positive affection… his business is not translating but already political instruction, which he might afterwards attempt by other means.” (See Macdonad and Hargreaves). In his “Vita Carmine Expressa”, Hobbes said he had made the translation so that his contemporaries might learn from the fate of the Athenian democracy how much wiser one man is than the mass of men.

Due to his attention to accurate research, Thucydides is considered one of the greatest ancient Greek historians. His account of the war between Athens and Sparta in the 5th century BC is one of the first works of history to combine political and ethical reflections with history writing. Thus, as curious as it may seem to some, it seems fitting that the first work to come from the pen of the towering figure of political thought should be a translation of precisely this work.

"The standards and methods of Thucydides as a contemporary historian have never been bettered. He began work at the very start of the events he records, and the penetration and concentration which he devoted to his account of the "Peleponnesian War" were based on the conviction that it would prove the most important event in Greek history... Thucydides has been valued as he hoped: statesmen as well as historians, men of affairs as well as scholars, have read an profited by him" (Printing and the Mind of Man: 102)

There seems to be no doubt amongst Hobbes scholars about the importance of this translation for the rest of Hobbes’ political work. It can be viewed as laying the foundation for the theories for which he would later become famous. In many ways, Hobbes took ideas from Thucydides and arranged them in the highly structures framework of the first social contract theory. Both writers seem to have strikingly similar views on many of the key themes of Political Realism.

Although many students of Thucydides would associate his Peloponnesian War with pro-democratic sentiments, Hobbes maintained that of all historians “he shows how incompetent democracy is”, and Hobbes clearly focused his reading on the pro-monarchial aspects of the work in its central coverage of the decline of Athenian democracy.

“Thomas Hobbes began his career of scholar, man of letters, and philosopher by translating Thucydides… “The History of the Penoponnesian War” apparently crystallized for Hobbes many of the ideas fundamental in his later political philosophy.

In translating and studying Thucydides Hobbes was carrying on the Renaissance tradition of turning to the Greek and Roman historians with the expectation of learning how to solve the problems of modern politics.” (Richard Schlatter: Thomas Hobbes and Thucydides, p. 350).

With this foundational translation, Hobbes also inscribes himself in a tradition attempting to make available to modern English readers facts and examples of historical events that showed the necessity of underpinning an ethical, English law of nations. Hobbes’s Thucydides was vitally concerned with the law of nations and concerned particularly with the legal justifications and moral obligations of empire.

Beyond the text, Hobbes’s translation includes his introduction “To The Readers” as well as his “On the Life and the History of Thucydides”, which sheds light on the importance Hobbes finds that the text has for contemporary English political thought. It also contains a map representing Greece at the time of Thucydides, which Hobbes drew himself, apart from two other maps and two further illustrations.

Hobbes’s great translation appeared in print several times and eventually became widely read. Although Hobbes had initially held back his first publication for some time, doubting whether he would get readers enough, he eventually published it, “deciding to content with “the few and better sort” “ (Mcdonald and Hargreaves). The first issue appeared in small numbers and is now extremely rare on the market. A second issue appeared in 1634 and a third in 1648. In 1676, the second edition appeared, followed by a third edition in 1723.