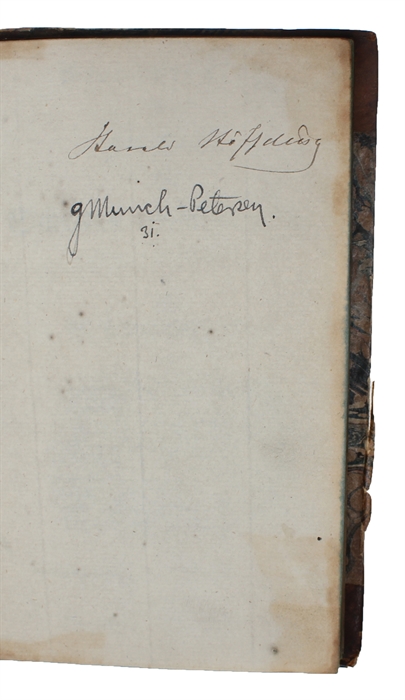 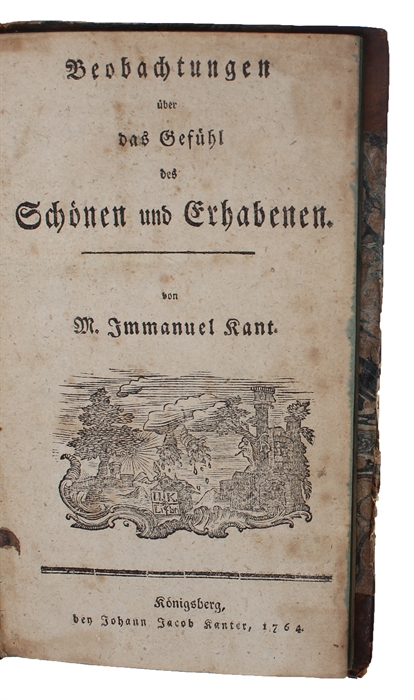 KANT'S FIRST OBSERVATIONS ON THE SUBLIME

Small 8vo. Contemporary half calf with some wear, especially to spine and edges of boards. Gilt title-label to spine. Some brownspotting, but an overall very good copy with no actual flaws. Woodcut title-vignette and woodcut head- and end-vignette. Two old owners' signatures to front free end-paper: Harald Høffding and Gustaf Munch-Pedersen. (2), 110 pp.

The very rare first edition of Kant's first work on aesthetics, a fundamental Kantian theme that he would pursue throughout the rest of his life and that would take up great parts of his philosophic work, most significantly in the Critique of Judgment from 1790.

Although written at the beginning of Kant's philosophical career and anticipating the critical period by decades, the present work represents a cornerstone of Kantian philosophy. Not only is it the first time that he deals with themes that are later to become absolutely essential to him, it is also a work that presents us with the philosopher in the making.

"On April 22, 1764, Immanuel Kant turned 40 years old, reaching what would turn out to be the midpoint of his life. From his humble beginnings as the son of a father who was a harness maker and a mother who was a devoted Pietist, Kant had risen through school to graduate in philosophy from the University of Konigsberg; and 1764 marked the year in which Kant was first offered a professorship, the highest honor of his academic guild. By the end of his life, forty years later, Kant had become the most influential philosopher in Europe. This influence was due primarily to a series of Critiques, the first of which - Kant's Critique of Pure Reason - was not published until 1781, when Kant was already 56 years old. In the wake of that "all-crushing" book, Kant developed a philosophical system to make sense of our understanding of the world and moral obligations, an a priori system within which pure reason held sway. But in 1764 Kant was not offered a professorship in metaphysics or logic, but in rhetoric and poetry. In this year he published a short book - Observations on the Feeling of the Beautiful and the Sublime... written in a playful and entertaining style" (Patrick Frierson's Introduction to the Cambridge-edition of the work, 2011, p. VII).

"Observations on the Feeling of the Beautiful and the Sublime represents the pinnacle of Kant's popular writing." (p. XI)

"Kant starts with a general discussion of the distinction between feelings for the sublime and for the beautiful. To anyone familiar with either Edmund Burke's A Philosophical Enquiry into the Origin of Our Ideas of the Sublime and Beautiful or Kant's own later treatment of the beautiful and sublime in the Critique of the Power of Judgment, it will be clear why Kant entitled his book Observations rather than Philosophical Enquiry. Kant's observation that "the sublime touches, the beautiful charms," or his distinction between "the terrifying sublime, . . . the noble, and . . . the magnificent" hardly measure up to the standards of a workedout aesthetic theory. But Kant uses these distinctions between the beautiful and the sublime to offer up a set of observations about human nature that fits well into the tradition of empirical reflections on human nature that includes such works as Hume's "Of National Character." (Ibid. p. XII).

"The essay was completed in 1763 when Kant, hardly forty and already a successful philosophic and scientific author, was enjoying his first years as an instructor at the University of Königsberg where he was by all accounts a lively and popular teacher… 1763 is also approximately the year in which Kant first read Rousseau's "Emile"-both the occasion for the well-known story about Kant's interrupted walk and the cause, according to Kant's famous confession, of a fundamental redirection of his thinking. "I am by natural inclination a researcher.. and I thought that this alone could constitute the honor of man; "Rousseau set me upright. And I would consider myself more useless than the ordinary worker if everything I did not contribute to establishing/securing the rights of man." "It is fitting," he wrote in the same series of notes, "that a human being expend his life on teaching others how to live by propagating (ziehen) "Emile". Would that Rousseau showed how, on the basis of his book ("Emile"), there could spring forth schools." All of Kant's subsequent philosophy can be understood as an attempted answer to that implicit question. "Observations on the Feeling of the Beautiful and the Sublime" helps mark a first stage in that effort." (ISI Archive, 2014).

The book has belonged to two important Danish thinkers:

Harald Høffding (1843-1931), who was one of the leading Danish philosophers of the turn of the century. Born and educated in Copenhagen, he became a schoolmaster, and ultimately in 1883 a professor at the University of Copenhagen. He was strongly influenced by Søren Kierkegaard in his early development, but later became a positivist, retaining and combining with it the spirit and method of practical psychology and the critical school. The physicist Niels Bohr studied philosophy from and became a friend of Høffding.

Gustaf Munch-Petersen (1912 -1938), who was a famous Danish writer and painter. He wrote surreal prose-poems that were groundbreaking in his time and that greatly influenced later writers. He had his debut as a writer with "Det nøgne menneske" from 1932 and had his pictures shown on different exhibitions in 1932. In 1937, he joined the International Brigades and fought in the Spanish Civil War, where he died the following year.