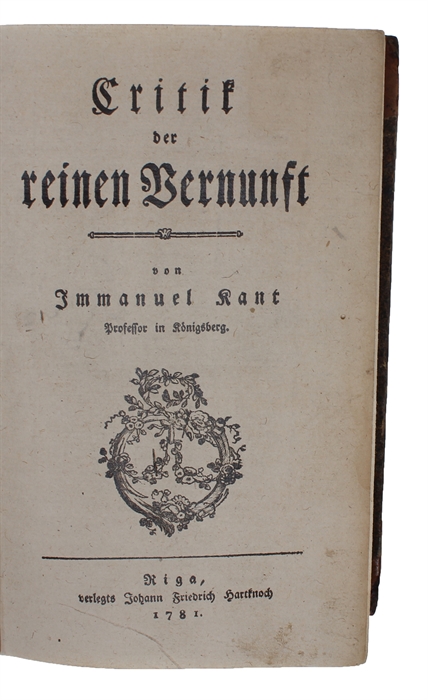 8vo. Very nice contemporary brown half calf with five raised bands, blindstamped ornamentation to each compartment, and blindstamped title to spine. A bit of wear to extremities, especially corners and lower capital, which has been neatly preserved with a barely noticeable dab of glue, but otherwise unrestored. Binding with with surface wear. Internally exceptionally nice. Overall a truly excellent copy. Contemporary owner's acqusition note, with price, to front free end-paper. (24), 856 pp.

Rare first edition of Kant's monumental main work, arguably the most important work in the history of philosophy since Aristotle.

The "Critique of Pure Reason" took Kant about a decade to write, and the work is of the utmost scarcity. It is due to this work that Kant became world famous as one of the three or four greatest philosophers of all times, and the work fundamentally changed the face of philosophy. With this work philosophy is finally provided with a new and comprehensive way of dealing systematically with the problems of philosophy.

"In 1770 Kant became professor of logic and metaphysics, and at this point there is a sudden falling off in number of his publications. The cause of this became clear eleven years later when "The Critique of Pure Reason" appeared; and with it Kant became famous. Kant's great achievement was to conclude finally the lines on which philosophical speculation had proceeded in the eighteenth century, and to open up a new and more comprehensive system of dealing with the problems of philosophy... The influence of Kant is paramount to the critical method of modern philosophy. No other thinker has been able to hold with such firmness the balance between speculative and empirical ideas. His penetrating analysis of the elements involved in synthesis, and the subjective process by which these elements are realized in the individual consciousness, demonstrated the operation of "pure reason", and the simplicity and cogency of his arguments achieved immediate fame." (PMM 226).