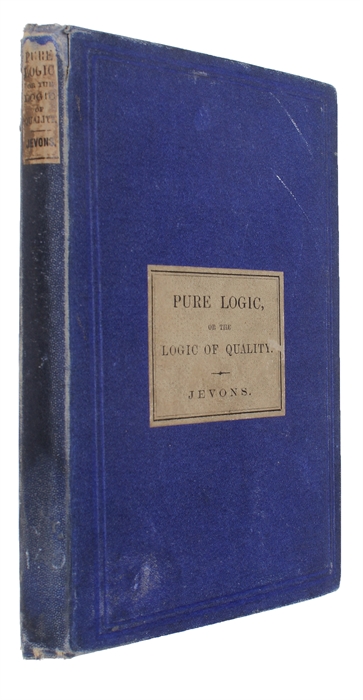 Pure Logic or the Logic of Quality apart from Quantity: with remarks on Boole's System and on the Relation of Logic and Mathematics.

8vo. In the original pebble-grained blue cloth with printed paper label to spine and front board. Boards panelled in blind and brown coated endpapers. Soiling to extremities and spines with wear. Paper label to spine with significant wear. Hindges weak. Stamp to upper part of title-page. [1 blank leaf], [6], (1)-87, (1) pp.

First edition of Jevons's first work on logic, which was based on Boole's system of logic, but freed from what he considered the false mathematical dress of that system, Jevons disliked Boole's emphasis on mathematical notation, although he apparently respected George Boole himself. The present work constitute one of the very earliest modern application of logic in computer-programming.

Jevons consulted Boole before sending him a copy and in a letter of 1863 he recorded, "I have written on the subject to Professor Boole, on whose logical system mine is an improvement. In his answer he does not explain away an objection I had raised against his system. He seems to think that my paper [the present work] probably does not contain more than he himself knows, this being a common failing of philosophers and others; but still he tells me very civilly that if I think still that there is anything new in my paper I ought to publish, which of course I shall do one way or another before long."