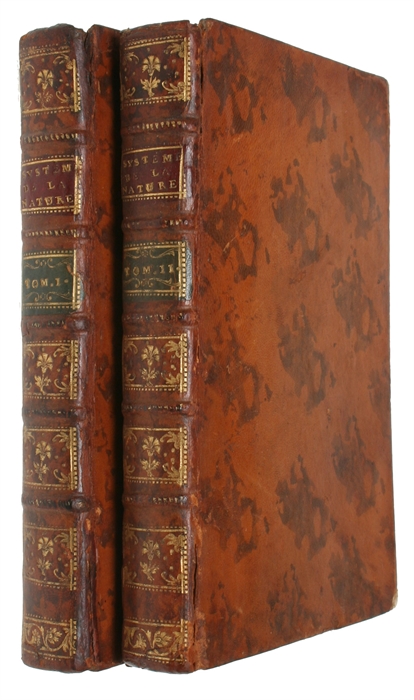 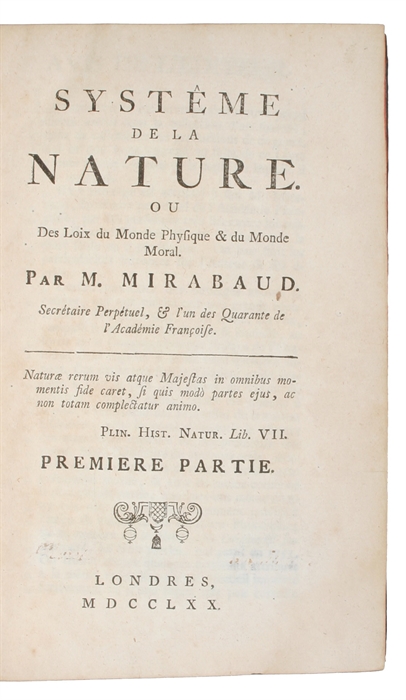 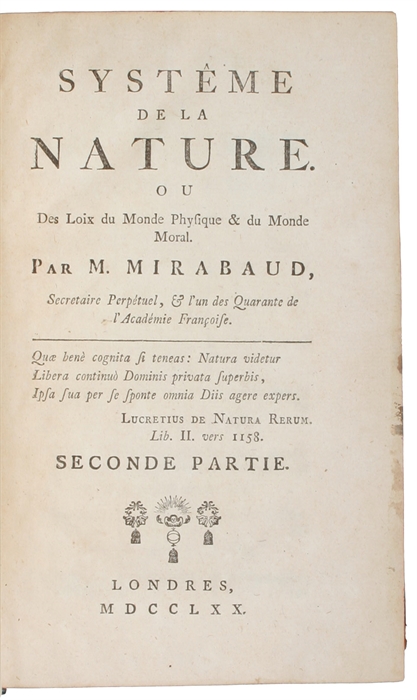 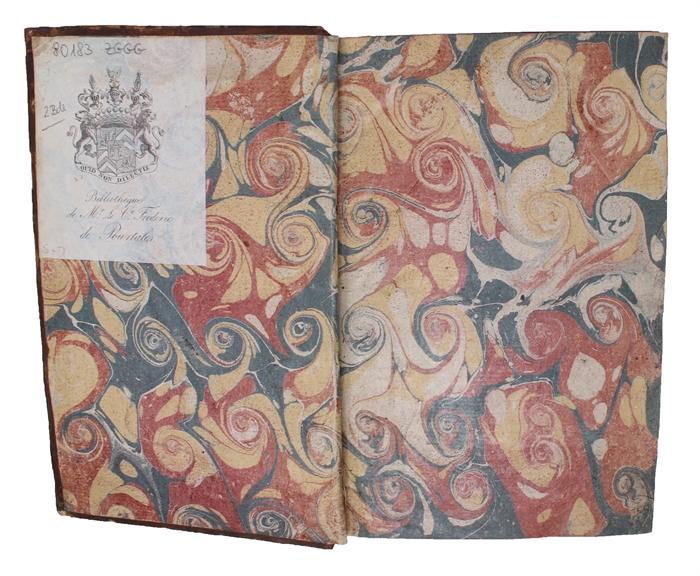 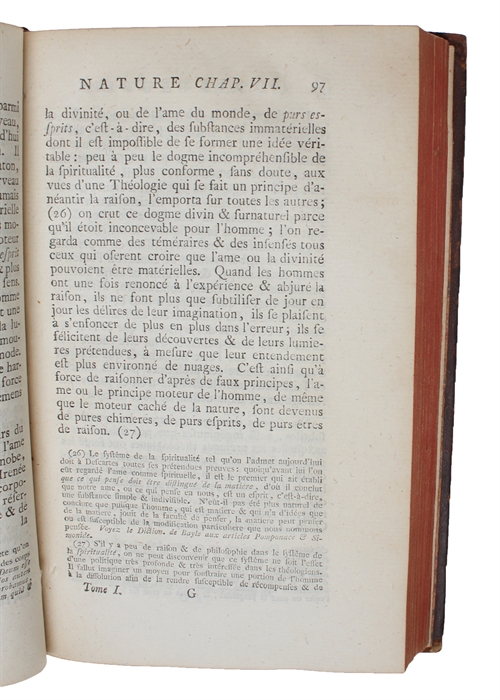 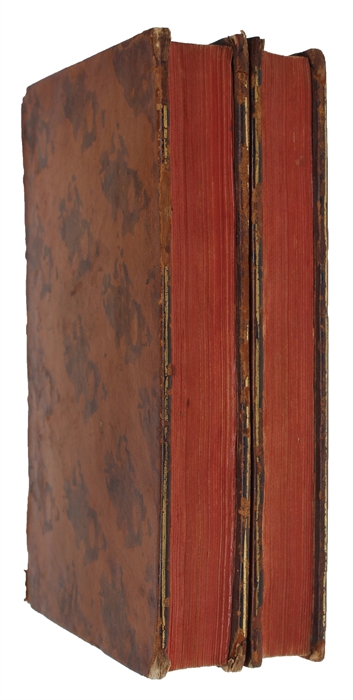 THE BIBLE OF MATERIALISM - PMM 215

8vo. Bound in two beautiful contemporary uniform full mottled calf bindings w. 5 raised bands to richly gilt back; title- and tome-labels in red and green. Crcak to front- and back-hinges at top and bottom, but still tight. A bit of wear w. minor loss to capitals. Internally fresh, fine and clean with only a few brownspotted leaves. Ex libris to inside of front boards: Bibliothêque de Me Le Cte Frédéric de Pourtales. (12), 370; (4), 412 pp.

The rare first edition, first issue, of d'Holbach's main work, the main work of materialism, and one of the most important works of natural philosophy.

D'Holbach (1723-1789), who was raised by a wealthy uncle, whom he inherited, together with his title of Baron, in 1753, maintained one of the most famous salons in Paris. This salon became the social and intellectual centre for the Encyclopédie, which was edited by Diderot and d'Alembert, whom he became closely connected with. D'Holbach himself also contributed decisively to the Encyclopédie, with at least 400 signed contributions, and probably as many unsigned, between 1752 and 1765. The "Côterie holbachique" or "the café of Europe", as the salon was known, attracted the most brilliant scientists, philosophers, writers and artists of the time (e.g. Diderot, d'Alembert, Helvetius, Voltaire, Hume, Sterne etc, etc.), and it became one of the most important gathering-places for the exchange of philosophical, scientific and political views under the "ancient régime". Apart from developing several foundational theories of seminal scientific and philosophical value, D'Holbach became known as one of the most skilled propagators and popularizers of scientific and philosophical ideas, promoting scientific progress and spreading philosophical ideas in a new and highly effective manner.

D'Holbach was himself the most audacious philosophe of this circle. During the 1760's he caused numerous anticlerical tracts (written in large, but not entirely, by himself) to be clandestinely printed abroad and illegally circulated in France. His philosophical masterpiece, the "Système de la nature, ou des lois du monde physique et du monde moral", a methodological and intransigent affirmation of materialism and atheism, appeared anonymously in 1770." (D.S.B. VI:468).

As the theories of his main work were at least as anticlerical and unaccepted as those of his smaller tracts, and on top of that so well presented and so convincing, it would have been dangerous for him to print the "Système de la Nature" under his own name, and even under the name of the city or printer. Thus, the work appeared pseudonomously under the name of the secretary of the Académie Francaise, J.B. Mirabaud, who had died 10 years earlier, and under a fictive place of printing, namely London instead of Amsterdam. "He could not publish safely under his own name, but had the ingenious idea of using the names of recently dead French authors. Thus, in 1770, his most famous book, "The System of Nature", appeared under the name Jean-Baptiste Mirabaud." (PMM 215).

In his main work, the monumental "Système de la Nature", d'Holbach presented that which was to become one of the most influential philosophical theories of the time, combined with and based on a complex of advanced scientific thought. In the present work he postulated materialism, and that on the basis of science and empiricism, on the basis of his elaborate picture of the universe as a self-created and self-creating entity that is constituted by material elements that each possess specific energies. He concludes, on the basis of empiricism and the positive truths that the science of his time had attained, that ideas such as God, immortality, creation etc. must be either contradictory or futile, and as such, his materialism naturally also propounded atheism, and his theory of the universe showed that nature is the product of matter (eternally in motion and arranged in accordance with mechanical laws), and that reality is nothing but nature.

The work had a sensational impact. For the first time, philosophical materialism is presented in an actual system, a fact which became essential to the influence and spreading of this atheistic scientific-philosophical strand. D'Holbach had created a work that dared unite the essence of all the essential material of the English and French Enlightenment and incorporate it into a closed materialistic system; and on the basis of a completely materialistic and atheistic foundation, he provided the modern world with a moral and ethic philosophy. The effects of the work were tremendous, and the consequences of its success were immeasurable, thus, already in the year of its publication, the work was condemned to burning by the Parisian parliament, making the first edition of the work a great scarcity.

In spite of its condemnation, and in spite of the reluctance of contemporary writers to acknowledge the work as dangerous (as Goethe said in "Dichtung und Wahrheit": "Wir begriffen nicht, wie ein solches Buch gefährlich sein könnte. Es kam uns so grau, so todtenhaft vor"), the "Systême de la Nature" and d'Holbach's materialism continued its influence on philosophic, political and scientific thought. In fact, it was this materialism that for Marx became the social basis of communism.

"In the "Système" Holbach rejected the Cartesian mind-body dualism and attempted to explain all phenomena, physical and mental, in terms of matter in motion. He derived the moral and intellectual faculties from man's sensibility to impressions made by the external world, and saw human actions as entirely determined by pleasure and pain. He continued his direct attack on religion by attempting to show that it derived entirely from habit and custom. But the Systeme was not a negative or destructive book: Holbach rejected religion because he saw it as a wholly harmful influence, and he tried to supply a more desirable alternative. "(Printing and the Mind of Man, 215).

"In keeping with such a naturalistic conception of tings, d'Holbach outlined an anticreationalist cosmology and a nondiluvian geology. He proposed a transformistic hypothesis regarding the origins of the animal species, including man, and described the successive changes, or new emergences, of organic beings as a function of ecology, that is, of the geological transformation of the earth itself and of its life-sustaining environment. While all this remained admittedly on the level of vague conjecture, the relative originality and long-term promise of such a hypothesis -which had previously been broached only by maillet, Maupertuis, and Diderot- were of genuine importance to the history of science. Furthermore, inasmuch as the principles of d'Holbach's mechanistic philosophy ruled out any fundamental distinction between living an nonliving aggregates of matter, his biology took basic issue with both the animism and the vitalism current among his contemporaries...This closely knit scheme of theories and hypotheses served not merely to liberate eighteenth-century science from various theological and metaphysical empediments, but it also anticipated several of the major directions in which more than one science was later to evolve. Notwithstanding suchprecursors as Hobbes, La Mttrie, and Diderot, d'Holbach was perhaps the first to argue unequivocally and uncompromisingly that the only philosophical attitude consistent with modern science must be at once naturalistic and antisupernatural." (D.S.B. VI:469).