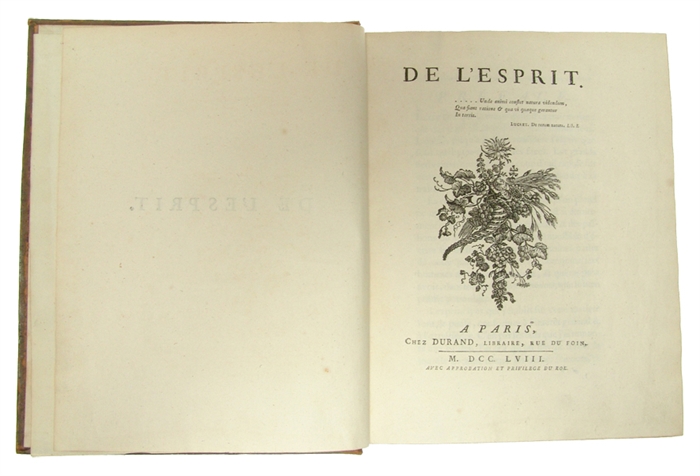 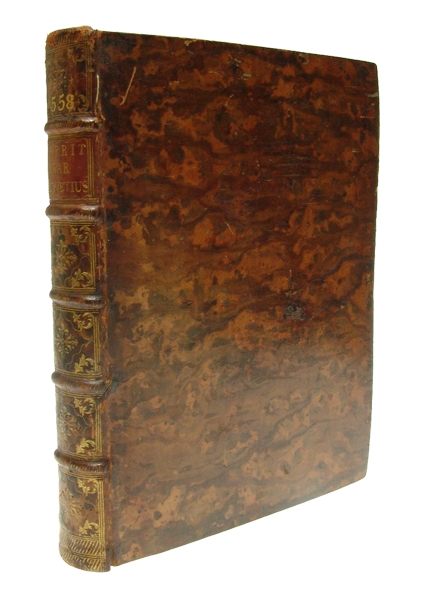 A PUBLICALLY BURNT MAIN WORK OF THE ENLIGHTENMENT

First edition, second issue of the monumental work of French Enlightenment. Helvetius' main work, because of which he is remembered today.

The work caused an immense uproar, when it appeared. It was considered heretical, atheistic, immoral etc. and lost its privilege within a few weeks; it was heavily condemned by the Church and the State and was burnt by the Hangman, the plan being to destroy all copies of it. Rarely had a book been met with such opposition, condemned by both the son of Louis XV and the Sorbonne, and the priests succeeded in convincing the court that the doctrines presented in this work could hardly be more dangerous, so even though Helvetius wrote three retractions, the book was still publically burned. Probably due to the noisy condemnation of the work, it was almost immediately translated into all European languages, making it quite influential. The likes of Bentham and Mill were influenced by the early utilitarian thoughts presented in the work, but apparently France was not ready for these new thoughts. When the Encyclopédie of Diderot and d'Alembert was suppressed for the second time, this had much to do with De l'Esprit, since Helvetius was thought to have been inspired by the dangerous encyclopedia.

Both issues of the first edition are rare, and only four complete copies are known of the first issue. The printing history of the work is extremely complicated, but due to David Smith's bibliography from 2001, it has now been possible to positively identify this copy as being the first edition, second issue, i.e. E.1B. Not in Graesse, not in Brunet.