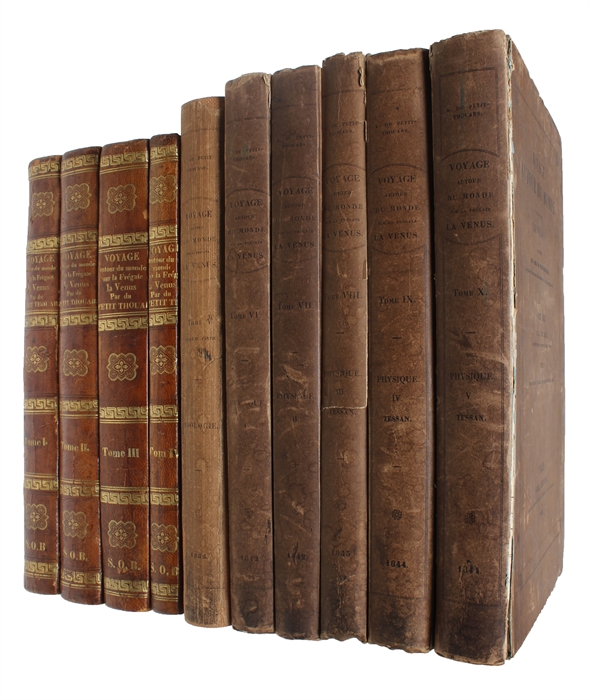 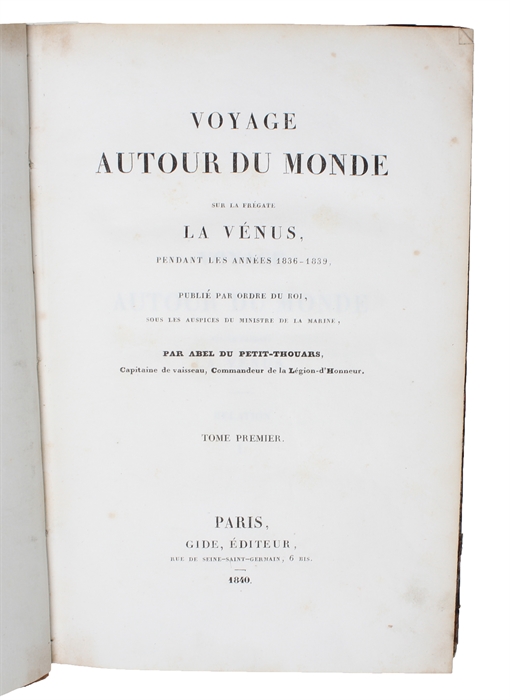 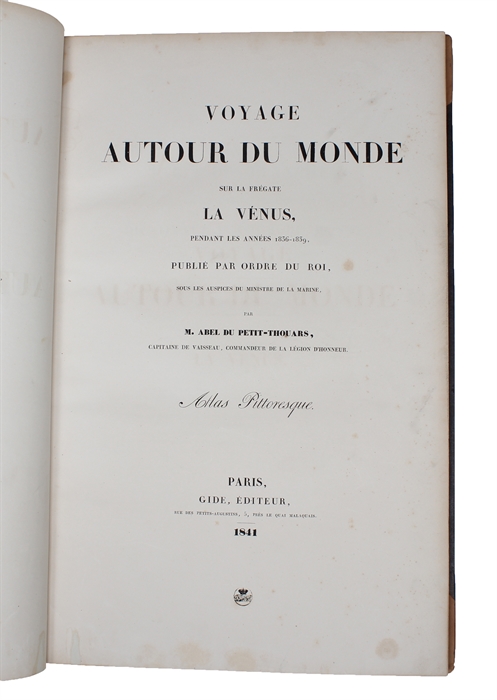 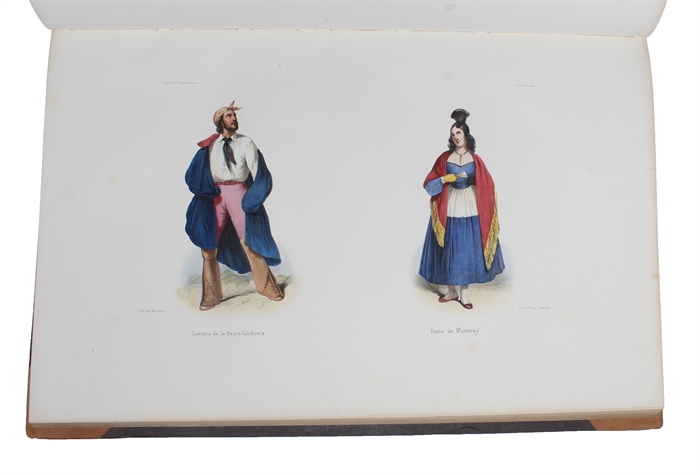 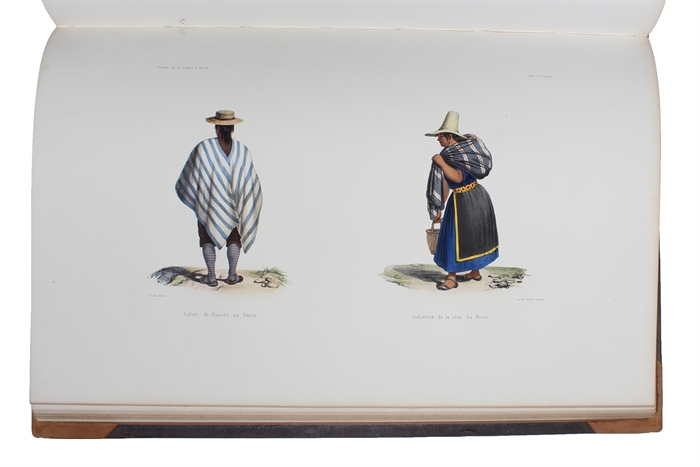 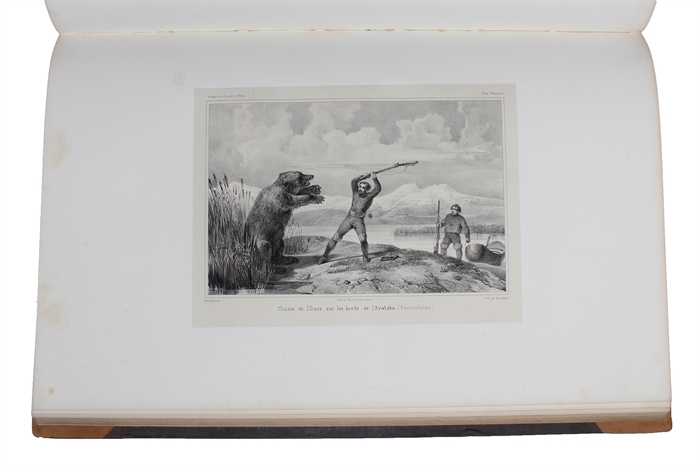 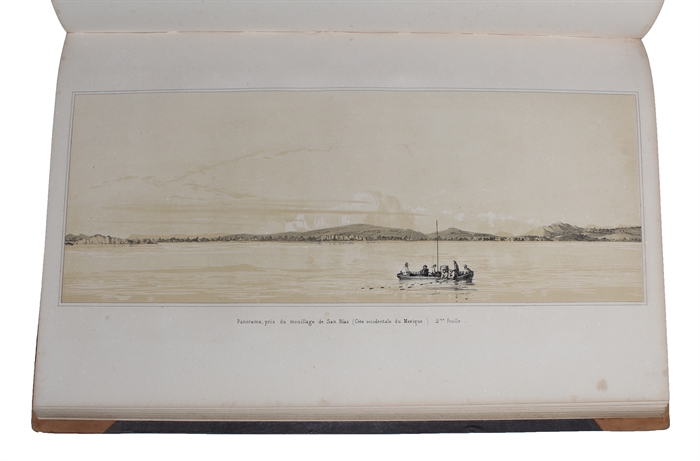 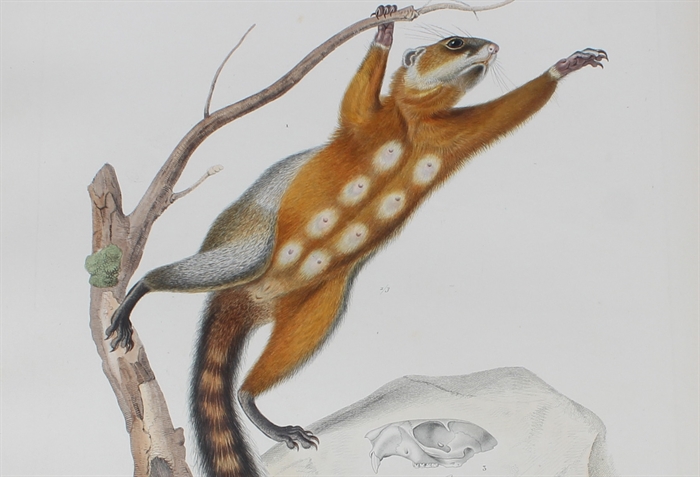 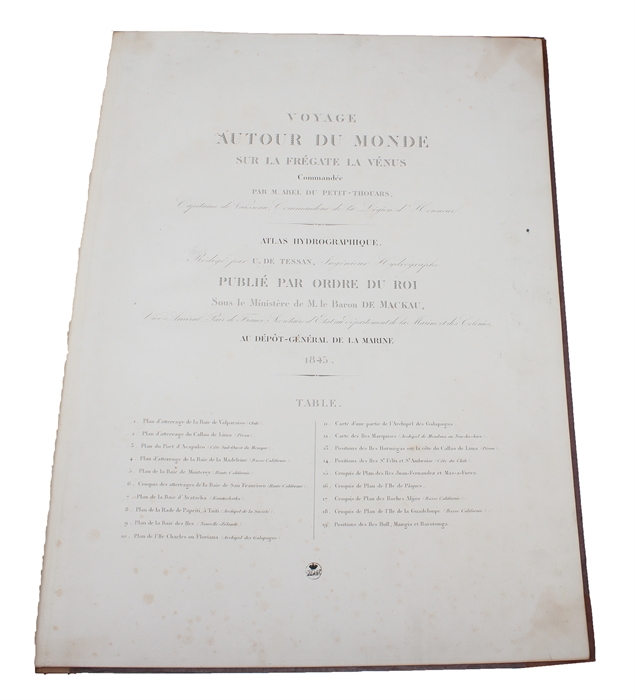 The first four text-volumes have a bit of wear to corners and capitals and some scattered brownspotting internally. Vol. V is rebacked and the original printed boards have been relaid over newer cloth. Vols. 6-10 are all uncut and partly unopened. The spines and one front board are darkened , and vol. VIII has a tear to the spine and front hinge. Some bumping to corners. Internally they are very fine. There's some light scattered brownspotting to the plate-volumes, but the plates are generally nice and clean. The Atlas Pittoresque has a worn spine that has been re-enforced with new leather at top and bottom. The spine of the Hydography-binding is quite worn an has also been re-enforced at top and bottom.

AN EXCELLENT SET IN OVERALL VERY NICE CONDITION - WITHOUT THE LATER PUBLISHED 36 PP. OF TEXT TO THE BOTANY-ATLAS AND LACKING ONE SINGLE PLATE IN THE ATLAS PITTORESQUE. OTHERWISE, ALL THE 10 SIGNIFICANT, COMPREHENSIVE TEXT-VOLUMES ARE PRESENT, WITH ALL 10 FOLDED TABLES AND 2 MAPS, AND WITH ALL FOUR ATLAS-VOLUMES WITH 194 OF THE 195 PLATES AND MAPS AS CALLED FOR IN THE INDICES.

The work is divided into seven parts: I: Rélation; II: Zoologie; III: Physique; IV: Botanique and collates as thus:

IV: Botanique:
TEXT: The present set is without the later published text-volume for the botany-atlas. Sabin does not mention this Botany-text-volume, but BMC does. It is printed much later, in 1864 and comprises 36 pp.
ATLAS: 1 Folio-volume. (3) ff. + 28 plates.

Scarce first edition of this magnificent travel account, Petit-Thouars' groundbreaking voyage round the world, which among many other things is famous for containing one of the most significant and comprehensive records of California during the Mexican period.

The great government expedition that the voyage in fact was, became of great value to French commerce and diplomacy, and from a political point of view, the expedition was a great success. But the expedition was also a success scientifically speaking, and the maps and views of the ports and places visited along the way are of great importance, as are the depictions of costumes etc. The hydrographer on board the Venus, responsible for the maps, was Urbain Dortet of Tessan, and on board was also the doctor-naturalist Adolphe Simon Neboux and the surgeon Charles René Augustin Léclancher.

"After the voyage of Duhaut-Cilly, the next French voyage round the world was made by Abel du Petit-Thouars on the frigate Venus. It was a government expedition, and the orders were to report on the whale fisheries in the Pacific for the benefit of French industry. Du Petit-Thouar's complete itinerary of places to be visited was set out in his instructions from the French Admiralty.
The Venus sailed from Brest on December 29, 1826, and after rounding Cape Horn, she went along the South American coast, calling at Valparaiso, Concepcion, Santiago, and Callao, which she reached on May 27, 1837. On June 14, she sailed for the Hawaiian Islands, and sighted the mountains of Hawaii on July 7. She, anchored at Honolulu and found that H.M.S. Sulphur, under Captain Edward Belcher, had arrived two days before her. The Venus sailed from Honolulu in August and arrived at Avatcha (Awatscha) Bay, Kamchatka on September 1. After a fortnight, she sailed for California and arrived at Monterey in October. Investigations were made along the coast southward to Acapulco during November and December, and a run to Easter Island was made in February 1838. Further investigations along the coast of Chile and Peru were conducted until June. From Payta, a visit was made to the various islands of the Galapagos, and on July 15, the Venus sailed to the Marquesas, where she arrived on August 1. After a short stop, she proceeded to Tahiti, and after passing the Tuamotuan islands named Wilson, Waterlandt, Vlieghen, and Krusenstern, reached Tahiti on August 29, anchoring in the Harbor of Papeete.
At Tahiti, Du Petit-Thouars presented an ultimatum to Queen Pomare, demanding that she write a letter to the King of France apologizing for the mistreatment of the priests Laval and Caret, pay 2,000 piastres indemnity for the mistreatment, and salute the French flag with the firing of twenty-one guns from the Tahitian fort. The helpless Queen duly sent Du Petit-Thouars the letter of apology and 125 ounces of gold, but stated that she could not give the twenty-one gun salute as the fort had no powder. Du Petit-Thouars obligingly supplied the powder, and next morning at 8 A.M., as the French flag page 87was unfurled on the Venus, the Tahitian fort gave the salute. At this period, the English Missionary, Pritchard, was acting as British Consul, and Moerenhout as United States Consul. Official visits were paid by the consuls and harmony was, to all appearances, restored. At this time, Dumont d'Urville, on his second voyage, had his ships anchored in Matavai Bay.
Du Petit-Thouars sailed south on September 17 to check the positions of the islands in the Australs, but the winds were unfavorable and he saw only the small uninhabited Hull Island (Maria). He sailed past Mangaia and Rarotonga in the Cook group and southwest past Raoul Island in the Kermadecs. Entering the Bay of Islands on October 13, he learned of the loss of the French whaler Jean Bart in the Chatham Islands. From New Zealand he sailed to Sydney, arriving on November 25. Du Petit-Thouars had a conversation with the Governor of the Colony of New South Wales, and he later received a letter from the Office of the Colonial Secretary informing him that the office had received a report from Consul Pritchard in Tahiti. The report stated that Queen Pomare, in her fear, had borrowed the indemnity money from the Consul. However, the office was satisfied with Du Petit-Thouars' oral assurance to the Governor that in hoisting the French flag in Tahiti, he did not intend that it should be assumed as an act of sovereignty over the island.
On December 8, 1838, the Venus sailed for Mauritius, and on March 4, 1839, Captain Du Petit-Thouars paid his official call on the Governor, M. de Hell. The ship sailed homeward via the Cape of Good Hope and, after the usual calls, anchored at Brest on June 24, 1839, completing a voyage of thirty months." ("Explorers of the Pacific: European and American Discoveries in Polynesia". Victoria. University of Wellington).