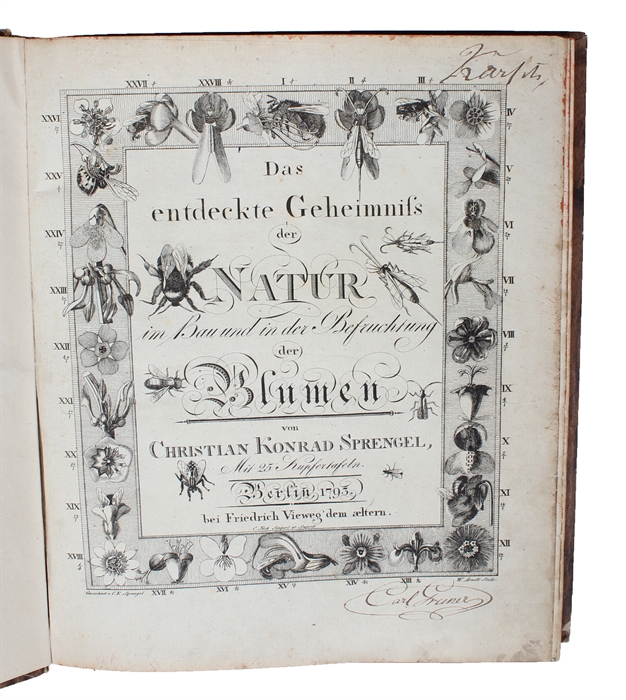 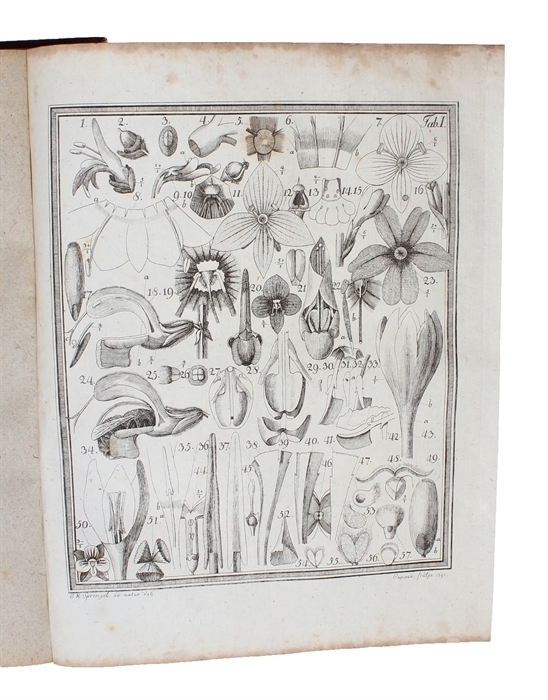 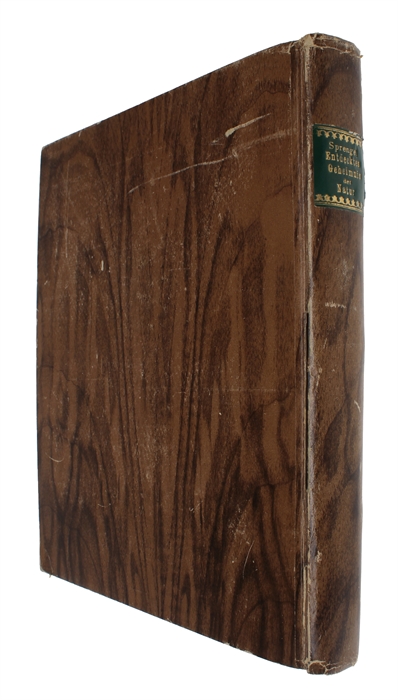 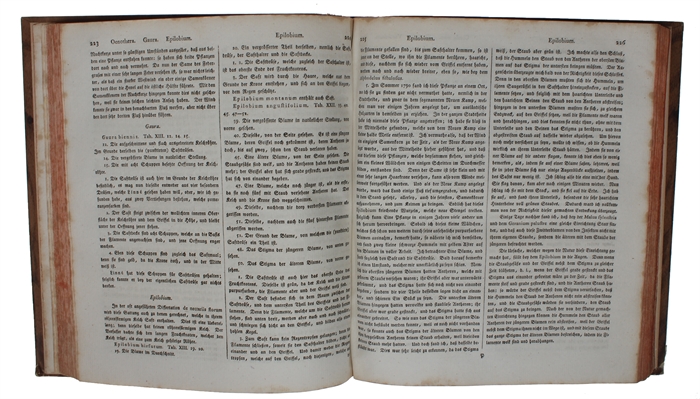 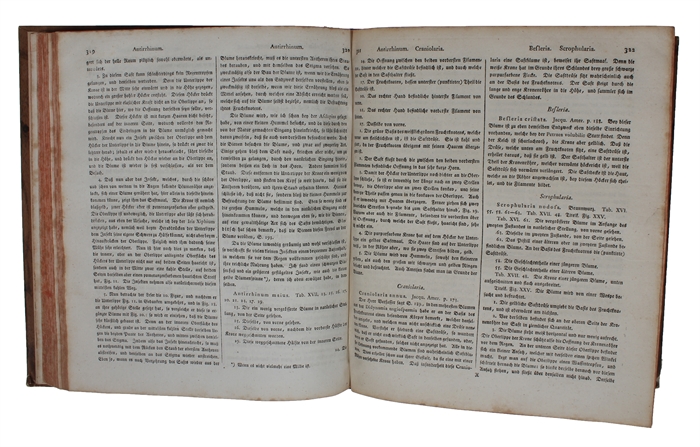 THE EVIDENCE FOR DARWIN'S THEORY OF EVOLUTION

4to. 19th century paper-covered boards with gilt title to spine. A bit of wear to extremities. (f2) re-enforced at inner margin. A very nice copy with only a bit of occasional brownspotting. Last few plates with a faint top-damp-stain. Old owners' names to title-page (one being "Carl Gruner", his initials also to end of index. Title within illustrated border. (3), ff., 444 columns (i.e. 222 pp.), 2 ff. + 25 engraved plates.

Scarce first edition of this milestone on the road to understanding the biology of flowers. Sprengel's magnum opus constitutes the first attempt to explain the origin of organic forms from definite relations to the environment, and it served as a main source of inspiration for Darwin, whom it provided with evidence for his theory of evolution.

With his milestone work "The Newly Revealed Mystery of Nature in the Structure and Fertilization of Flowers", Christian Konrad Sprengel (1750 -1816) became the first to recognize that the function of flowers was to attract insects, and that nature favoured cross-pollination. With Darwin's recognition and reconfirmation of Sprengel's results, the work came to set the foundations for the modern study of floral biology and anthecology.

"In the summer of 1787 Sprengel began observing the pollination of Geranium flowers. These relationships of flower structure, insect visitors, and pollination mechanisms occupied him for the next six years and culminated in the publication of his great work, "Das entdeckte Geheimniss der Natur im Bau und in der Befruchtung der Blumen", in 1793. Printed in double-column format, it had twenty-five copperplates crowded with 1,117 drawings of floral parts representing 461 species. The striking title page also served as a plate, since the wide border comprised twenty-eight insect and flower drawings. Although it became a milestone on the road to understanding the biology of flowers, Sprengel was greatly disappointed at the book's reception.

Although J. G. Koelreuter had already noted some of the relationships of floral parts, nectar, and insects to pollination, Sprengel went much further in stating that the structure of the flower can be interpreted only by considering the role of each part in relation to insect visits. He noted that color and scent are attractions; that the corolla markings are guides to the hidden nectar; and that grasses have light pollen and are wind-pollinated. His rediscovery of dichogamy (the maturation of anthers and stigmas at different times in the same flower, such that self-pollination cannot occur) led him to one of his major conclusions: "Nature appears not to have intended that any flower should be fertilized by its own pollen." This doctrine, together with the even more important view of the close integration of floral structures with insect visitation, was the first attempt to explain the origin of organic forms from definite relations to the environment. "Since Darwin breathed new life into these ideas by the theory of selection. Sprengel has been recognized as one of its chief supports."

There are a few early comments on Sprengel's book - including a book review, a 1794 letter by Goethe, and a later commentary by his nephew Kurt P. Sprengel. In England, Robert Brown published an article on pollination in 1833, citing two observations from Sprengel. Furthermore, Charles Darwin noted that it was on Brown's advice in November 1841 that he obtained and read "C. K. Sprengel's wonderful book." Perhaps through the work of Brown (and later of Sprengel), Darwin became interested in pollination by insects with observations that began in the summer of 1838. In the chapter "Natural Selection" of the "Origin of Species" (1859) he refers to these observations, and confirms Sprengel's similar ones, on dichogamy: "These plants have in fact separated sexes, and must habitually be crossed.... How simply are these facts explained on the view of an occasional cross with a distinct individual being advantageous or indispensable."

Further comments on Sprengel's work are in Darwin's two botanical works, "Orchids" (1862) and "Cross and Self Fertilization" (1876). In the former he refers to Sprengel's "curious and valuable work," to "Sprengel's Doctrine," and again to Sprengel's work that "...until lately was often spoken lightly of. No doubt he was an enthusiast, and perhaps carried some of his ideas to extreme length. But I feel sure, from my own observations, that his work contains an immense body of truth." In the latter book, Darwin cites Sprengel's notes on the essential role of insects in the pollination of many plants, and says: "He was in advance of his age, and his discoveries were for a long time neglected." Further, he states that Sprengel, while noting that cross-pollination between flowers of the same species occurred, was not "... aware that there was any difference in power between pollen from the same plant and from a distinct plant." It remained for Darwin to assess the important of this for his theory of natural selection.

... A proposed second part of "Das entdeckte Geheimniss" was never published, but a small work on bees appeared in 1811 and a work on philology in 1815....

Were it not for his remarkable book Sprengel would be forgotten today. This work reached Darwin, and the insect-plant mutualism so elegantly and minutely described there profoundly influenced him. Although the two were poles apart in religious beliefs, the elemental natural processes revealed by their studies provided Darwin with evidence for his theory of evolution. (Lawrence J. King in: D.S.B. XII:587-88).

"Christian Konrad Sprengel, (born September 22, 1750, Brandenburg, Germany-died April 7, 1816, Berlin), German botanist and teacher whose studies of sex in plants led him to a general theory of fertilization which, basically, is accepted today.

Sprengel studied theology and languages, spent some years as a schoolmaster in Spandau and Berlin, and became rector of Spandau. In pursuing botanical studies he neglected his duties, and, after his dismissal in 1794, with a pension, he went to Berlin. As a theologian, he believed that everything in nature was created for a purpose, and in observing plants he attempted to uncover the purpose of each minute part.
Sprengel discovered that the nectaries (nectar-producing organs in flowers) were indicated by special colours, and he reasoned that the colour attracted insects. The insects, he found, were the means of conveying pollen from the stamen (male part) of one flower to the pistil (female part) of another. He also discovered that in many bisexual flowers the stamen and pistil mature at different times, and self-fertilization thus cannot occur; fertilization is accomplished instead by the transfer of pollen from one flower to another. The process of maturation of the male and female parts at different periods he called dichogamy, a term that is still used, and he traced the process in fine detail. He discovered that some flowers rely on the wind to transfer their pollen and studied the differences between these flowers and those fertilized by insects.
Sprengel believed that his principles explained all the characteristics of flowers, such as position, size, form, colour, odour, and time of flowering. He published his observations and thoughts in "Das entdeckte Geheimnis der Natur im Bau und in der Befruchtung der Blumen" (1793; "The Newly Revealed Mystery of Nature in the Structure and Fertilization of Flowers"). When his book was not well received, Sprengel became depressed and did not publish the results of his other botanical research. He turned to philology but did not distinguish himself in it.