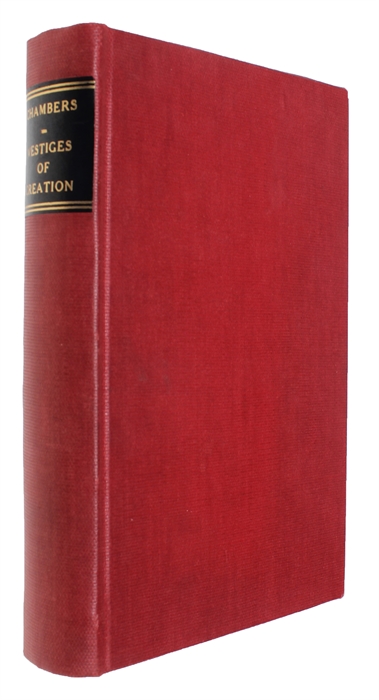 THE FORERUNNER OF "ORIGIN OF SPECIES"

Vestiges of the Natural History of Creation.

8vo. Uncut and with the original yellow blank wrappers in a later red full cloth with gilt title-label to spine. The front wrapper and the title-page have small marginal re-enforcements and front wrapper a small closed tear towards hinge. With the book-plate of HF Norman to inside of front board. A nice and clean copy with only very light occasional brownspotting. VI, 390 pp.

The very rare first edition of the milestone work that launched the modern public debate on evolutionary origins and historical geology. This sensational work constitutes the first work in English to contain a full-length exposition of evolutionary biology. It is the most sensational book on the subject to appear before Darwin's "Origin of Species"; being the forerunner of the "Origin", "Vestiges" not only prepared the public for Darwin's eveolutionary thoughts, it paved the way for the theory of evolution by natural selection in general.

Apart from anticipating "Origin" by 15 years, the "Vestiges" also contains one of the very earliest references to computing within the context of biology.

This sensational work with its unorthodox themes that contradicted contemporary theology, created an uproar on both sides of the Atlantic and became an instant best-seller. It "was one of the greatest scientific best-sellers of the Victorian age, going through at least twelve large editions in England, numerous American editions, and several foreign-language editions." (Origins of Cyberspace).

"Vestiges" was the direct cause of a shift in popular opinion which - according also to Charles Darwin himself - prepared the public mind for the scientific theories of evolution by natural selection.

"The "Vestiges" played a significant role in nineteenth-century biology. By presenting an evolutionary view of nature, it received the first wave of reaction and thus eased the way for Darwin's "On the Origin of Species" fifteen years later." (DSB III:192).

Due to its controversial nature, the book was published anonymously, and for decades there was speculation about its authorship. Up until three years after the author's death when the true authorship was revealed, only seven people were told who the author was. Darwin was one of the few to have guessed the identity of the author, before the appearance of the 12th edition of the work (1884), in which Chambers's brother owned up to Robert being the true author. At one time it was rumoured to have been written by Prince Albert (who read it aloud to Queen Victoria). Alexander Bain, Richard Owen, and Charles Darwin were also favoured guesses, as was Charles Babbage.
In fact, the work was not only responsible for bringing forth the idea of evolution by natural selection and presenting that groundbreaking theory to the public 15 years before Darwin did so, it also contains one of the very earliest references to computing within the context of biology, and by comparing evolutionary change occurring over long periods of time with the workings of Babbage's Difference Engine, the "Vestiges" - with its immense success and huge audience - was responsible for spreading Babbage's ideas and making them known - and understandable - to the public.

"It is likely that most Victorian readers of Babbage's "Treatise" (other than the relative few who had seen his Difference Engine in operation) had no understanding of what Babbage was writing about here, since virtually no one in Babbage's time was accustomed to thinking in terms of a programmed series of mathematical operations. However, Babbage's ideas about natural laws resembling "programs" received a great deal of attention when Robert Chambers, a Scottish publisher and author, issued his "Vestiges of the Natural History of Creation" in 1844. Because Chambers's work was one of the greatest scientific best-sellers of the Victorian age..., Babbage's ideas certainly received a much wider circulation through the "Vestiges" than through the two editions of the "Ninth Bridgewater Treatise." (Origins of Cyberspace, p. 147).

There is no doubt as to the wide range of readers that "Vestiges" attracted - also in the United States, where it sold even more copies than in Great Britain and went through ab. twenty editions. Anyone with the slightest interest in scientific topics at the time read the book, and with many it found great resonance.
Abraham Lincoln and Queen Victoria read it, philosophers read it - like Arthur Schopenhauer and John Stuart Mill -, poets read it - like Alfred Tennyson and Elizabeth Barrett Browning - , statesmen read it - like William Gladstone and Benjamin Disraeli -, scientists read it - like Thomas Henry Huxley and Adam Sedgwick - and Alfred Russel Wallace and Charles Darwin read it.

Charles Darwin read an advertisement about "Vestiges" in either the "Times" or "Athenaeum". We know that he made a note to read it and copied the name of the publisher - and the price - in his notebook. Apparently he never got around to buying it, but read it in the British Museum library. We also know that both Bates and Wallace read the "Vestiges" at the time of its appearance, and "[t]he young men's letters reveal that both were greatly stimulated by Chambers's "Vestiges of the Natural History of Creation"" (Loren Eiseley, "Darwin and the Mysterious Mr. X", p. 17).

Charles Darwin immediately saw it for what it was and called it "that strange, unphilosophical, but capitally-written book," and noted that a few people had suspected him of being the author. He was very much aware of the fact the book was paving the way for the great work he himself was contemplating and which was to be published some fifteen years later, and he later remarked that "Vestiges" was important in preparing many people to accept his own theory of evolution.

"By 1860 it had sold over 20,000 copies in eleven British editions plus editions in the United States, Germany, and the Netherlands. Chambers had planned to write no more on the subject; but late in 1845, largely in response to Adam Sedgwick's review of the "Vestiges" in the Edinburgh Review, he wrote "Explanations: A Sequel to Vestige of the Natural History of Creation". The "Explanations" was appended to later editions of the "Vestiges", several of which underwent substantial revisions." (DSB III:192).

"This outspoken statement of a belief in evolution, published anonymously but attributed to Chambers, anticipated Darwin's "Origin" by 16 years and generally prepared the public for the latter. The authorship of the book was not revealed until three years after Chambers's death." (Garrison& Morton, p. 28).

It is extremely rare to find the work with the original wrappers. As they are blank, almost all binders discarded them and only a very limited number have survived.