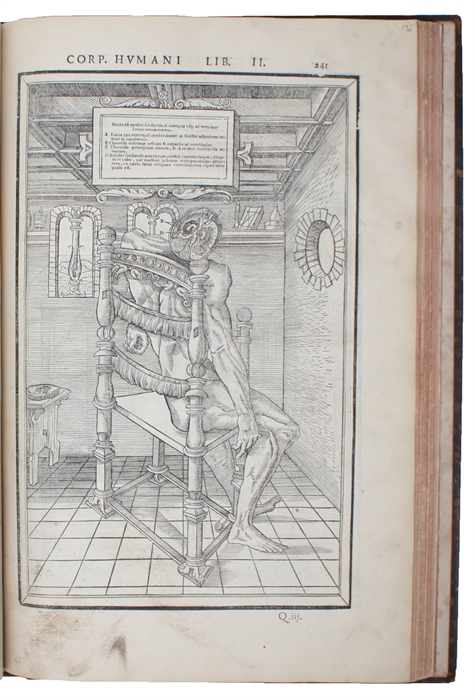 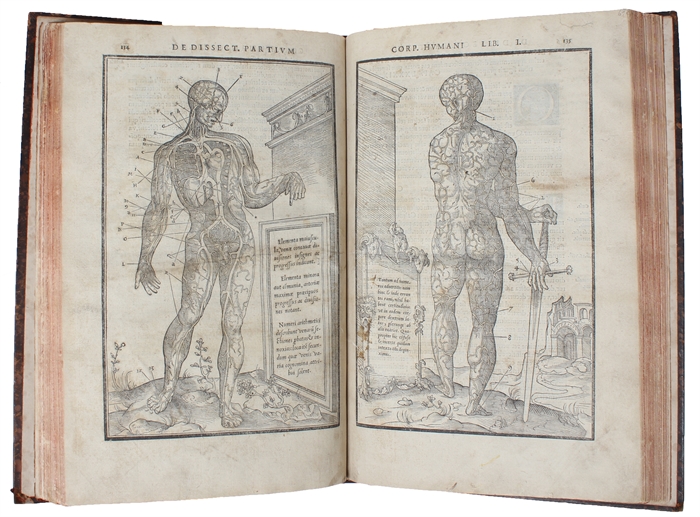 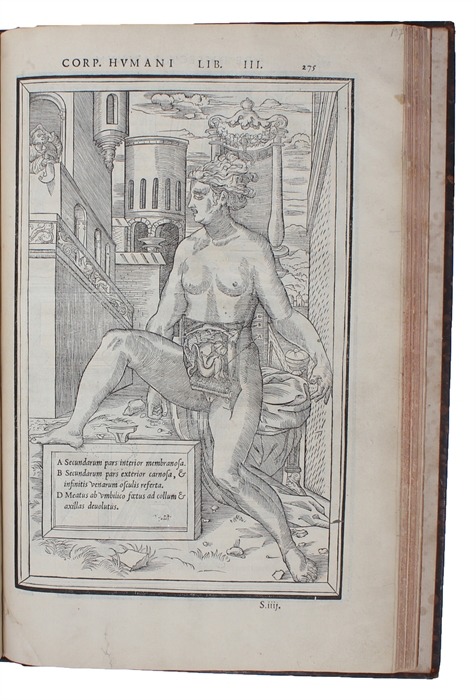 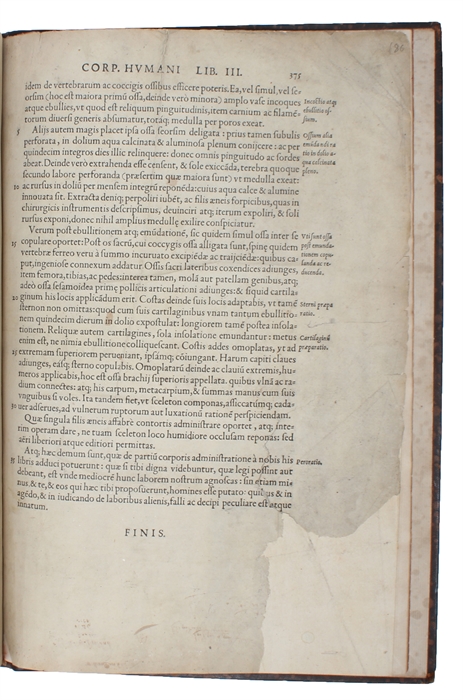 ONE OF THE FINEST OF ALL ANATOMICAL TREATISES

Folio. 17th century full mottled calf, neatly rebacked preserving the old spine. Title-page a bit dusty and strengthened at inner margin, on blank verso. A small closed tear to inner margin of 2nd leaf, no loss. Last leeaf with a repair to lower corner, no loss of text. Last three pages a bit dusty. A few repaired marginal tears, no loss. Light age yellowing and here and there some soiling and spotting (presumably due to medical use). All in all a good, well-margined copy. (24), 375, (1) pp. Printer's device to title-page, lovely woodcut initials, 62 full-page anatomical woodcuts, and ab. 100 sall medical illustrations to the text.

The very rare first edition of one of the most important works in the history of medicine, being the first published work to include illustrations of the whole external venous, arterial, and nervous systems, and the most magnificent anatomical atlas of the sixteenth century, next to Vesalius' "Fabrica". Although the work was published two years after Vesalius', the anatomy itself is pre-Vesalian and antedates the "Fabrica" by some years in actual composition.

"This magnificent folio volume is one of the finest of all anatomical treatises." (Heirs of Hippocrates).

"One of the finest woodcut books of the French Renaissance, in which science and art are ideally merged." (Schreiber).

It is down to coincidence and a complicated lawsuit that Vesalius's anatomy appeared before Estienne's and thus stole the thunder.

Charles Estienne was a member of the famous family of printers (and scholars) bearing the same name. He received his medical degree from the University of Paris of 1542, but had been at work on this his anatomical magnum opus for many years. When Charles's father died in 1520, his mother married Simon de Colines, the famous printer, who also published the present work. It was in Colines's house that Charles Estienne found many of the valuable woodblocks that serve as basis for the magnificent illustrations in the "De Dissectione". The work is divided into three parts, the first two illustrated with full-page woodcuts, the third with smaller woodcut figures in the text. The first woodcut in the text is signed "S.R.", presumably referring to Stephanus Riverus (Estienne de la Riviere), Charles Estienne's friend and co-producer of this magnificent work. Riviere, who was at the time surgeon, artist, and engraver, is supposed to have prepared the drawings for the anatomical details. Eight of the woodcuts are signed by Jean Jollat, a celebrated Parisian engraver. Several of the Jollat blocks bear the dates 1530, 1531, and 1532 and a cutter's signature that points to the workshop of the eminent artist and typographer Geofroy Tory. Most of the magnificent full-page figures have the anatomical portions on separate smaller wood-blocks inserted into the large one.

These artistically drawn figures are also interesting in themselves. They are shown in unusual poses against unusual backgrounds. Some are depicted hooked up on trees, sprawling in great chairs, etc. Almost all of them are quite remarkable and many are morbid. They were seemingly all created around 1530 when the first woodcut is dated. Presumably they then came into the possession of Simon de Colines and Geofroy Troy, who was his favourite engraver, who may have wanted to use them for an anatomical atlas for artists. There may have been be several different reasons why Collines never used them, but still kept them in his printing house.

In 1538 Charles Estienne, who was a surgeon, decided together with Estienne de la Riviere to prepare a new book of anatomy using the highly valuable, but hitherto discarded, blocks which lay in his stepfather's printing house. Some of them were used as they were, but most of them underwent the appropriate modifications by means of insets. Riviere presumably dissected a corpse to serve as a model for the skeleton figures, and may also have contributed the anatomical details for the insets.

Anyway, in 1539, Riviere lodged a complaint before the Parliament against Charles Estienne's claiming of the author's right. This lawsuit delayed the publication of the work, two-thirds of which had already been printed, and only in 1541 could it be submitted to the Faculty of Medicine for approval.

"Had "De dissectione" been published in 1539, there is no question that it would have stolen much of the thunder from Vesalius' "Fabrica...". Despite its tardy appearance, however, "De dissectione" was able to
make numerous original contributions to anatomy, including the first published illustrations of the whole external and venous nervous systems, and descriptions of the morphology and purpose of the "feeding holes" of bones, the tripartite composition of the sternum, the valvulae in the hepatic veins and the scrotal septum. In addition, the work's eight dissections of the brain give more anatomical detail than had previously appeared" (Norman).

In the preface, Estienne tells that printing was interrupted in 1539 and complains of plagiarism during the six years that the work was delayed. "The costly book was eventually published in 1545, followed in 1546 by the French edition. By that time, however, Vesalius had stolen the show... Herrlinger means that Vesalius profited from Estienne's illustrations after having encountered them during his stay in Paris from 1533 to 1536, when the majority of the woodcuts were already completed." (Hagelin).

No matter what, the quality of the plates is extraordinary, and combined with the text, the importance of this work in the history of medicine and art is overwhelming. Choulant describes the work of the engravers as "particularly excellent", and the text "is particularly significant from the view point of the history of anatomic discoveries, since Estienne himself was a dissector and began his work long before Vesalius" (Choulant).

The present copy has a highly interesting provenance:

ROBERT WESTHAW was an astrologer, prognosticator, author of almanacks, and quack doctor who flourished in the last quarter of the 16th century. His almanacks contained medical information apparently derived, in part at least, from the present volume.

WILLIAM PASCHALL (1608-1670) was a pewterer in Bristol. His son, Thomas, emigrated to Philadelphia in 1684, and purchased land from William Penn. He became a prominent member of the Provincial Assembly and Common Council. The present volume may have come with his to the US.

"First published work to include illustrations of the whole external venous and nervous systems." (G&M).

"Illustrated with 56 figures based upon Estienne's dissections and observations. Contains the first published illustrations presenting the venous, arterial, and nervous systems in their entirety. Five of the cuts bear the Lorraine cross, the mark of Geofroy Tory. Several of the figures are dated 1530, 1531, or 1532, and the cuts reveal that blocks showing a detail of a given area were in various instances superimposed upon a more simply drawn figure, the detail being nortised into the main cut. According to Mr. Albert E. Lownes's description of the copy in his collection, for instance, "there are 62 full-page woodcuts, but six of them are repeated, so that there are only 56 different blocks. Thirty-eight of these have mortises with the anatomical details. Four of the blocks have two mortises." By 1539 the work itself was completed to the middle of the last section. Although not printed until after Vesalius's "Fabrica", the writing of the present text antedated the latter's publication by some years." (Stillwell).

"This magnificent folio volume is one of the finest of all anatomical treatises. Certainly it was the finest printed in France in its century, and the sixty-two full-page woodcuts, artistically presenting the anatomical subjects in special poses before unusual background settings, are unusually sumptuous and imaginative. The anatomy itself is pre-Vesalian..." (Heirs of Hippocrates).

"First edition of one of the great woodcut books of the French Renaissance and the most magnificent anatomical atlas of the sixteenth century next to Vesalius' "Fabrica". A French edition by the same printer followed in 1546, which has two additional full-page woodcuts... Although Estienne's anatomical atlas was published two years after the "Fabrica" of Vesalius, it antedates it in actual composition." (Hagelin, p. 26).