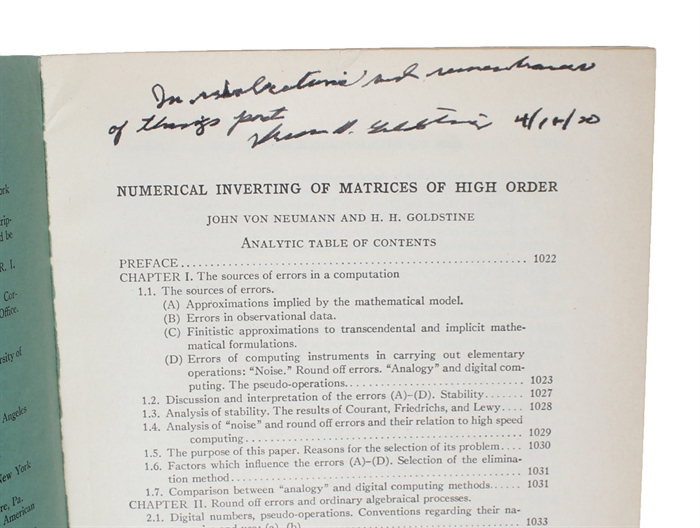 First edition, presentation copy, of the founding paper of modern numerical analysis. The invention of high speed electronic digital computers, during the Second World War, opened up for the possibility of solving practical mathematical problems which were earlier considered virtually impenetrable due to large and time consuming calculations. However, because of the architecture of computers, it is not a simple question of programming the computer with the method/algorithm for solving the problem. Sources of error and limitations of memory require new numerical methods. Shortly after the war von Neumann joined the EDVAC project at the Moore School together with Goldstine, Mauchly, Eckert and Burks. It was during his work here that von Neumann realized how the important Gaussian elimination method, for solving matrix equations of the form Ax=b, could be practically utilized in an environment as the electronic digital computer. In this joint paper Goldstine and von Neumann gave an extensive and rigorous analysis using numerical analysis and probabilistic methods for estimating errors and determining the scope of the problems which the method could be applied to. In effect they laid the foundation for modern error analysis. Hook & Norman, 958 (part 1 only).