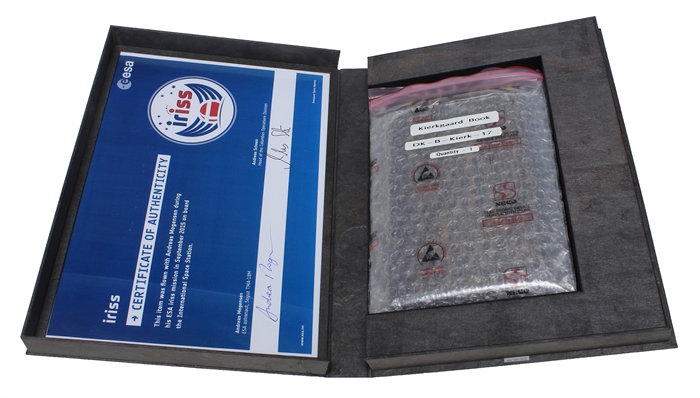 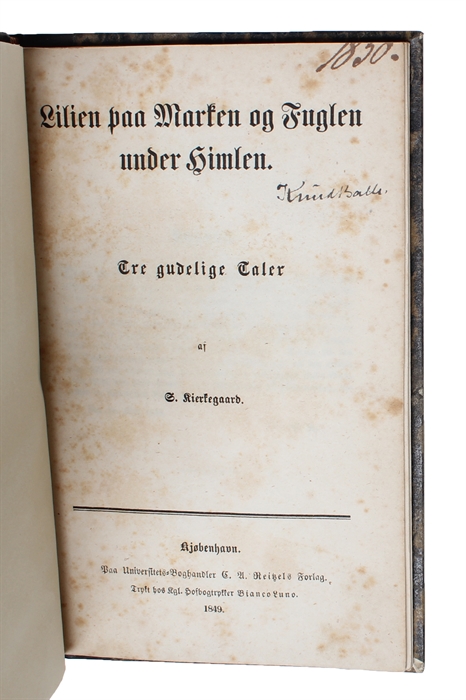 Lilien paa Marken og Fuglen under Himlen. Tre gudelige Taler [The Lily in the Field and the Bird in the Sky] + certificate stating that the book has been in space.

8vo. A magnificent black half calf in perfect pastiche-style with richly gilt spine. Some brownspotting, but a very good copy. 51pp. Old owner's names to title-page. The book is housed in the original bubble-wrap envelope stating "Kierkegaard Book" and a code, in which it was kept during its travel into space.

The Certficate of Authenticity (blue background with white and red) measures 21x29,5 cm. It states that "This item was flown with Andreas Mogensen during his ESA iriss mission in September 2015 in board the International Space Station", carries the logos os ESA (European Space Agency) and iriss and is signed by both Andreas Mogensen, ESA astronaut, and Andreas Schoen, Head of the Columbus Operations Dvision.

The book and the certificate are housed together in an absolutely splendid custom-made box of grey stone veneer with a "moon-like" stone-surface and silver lettering (KIERKEGAARD IN SPACE) to the spine. The certficate is kept in the "lid" of the box, under plastic "frame", framed with a thin like of stone veneer with magnetic edges, so that it can be easily removed but is still safely and elegantly kept in place. The book, still in the original bubble-wrap-envelope, is kept in the other part of the box, in a hollow lined with thick structured silk.

First edition of Kierkegaard's "The Lily of the Field and the Bird in the Sky", which consists in three of his most important speeches, together with an original certificate stating that this copy of the book has been in space.

On September 2nd 2015, Denmark's first astronaut, Andreas Mogensen, was sent on a mission into space, at the international space station ISS. Among the extremely carefully chosen luggage that he could bring was the first edition of Kierkegaard's "Lilien paa Marken og Fuglen under Himlen", a work that teaches man to be humble. The crew on the space station consisted in nine astronauts from different countries, and during his stay, Andreas Mogensen would host a "Danish evening", during which he would read aloud from the present Kierkegaard-book.

It is a tradition that astronauts bring a very limited number of carefully chosen symbolic items with them into space, and when it became clear that Denmark would have a man in space for the first time, the Danish Ministry of Education and Research immediately set out to decide which national symbols would make the cut. There are very strict regulations dictating what and how much can be brought on a spaceship (1 kilo costs USD 50.000 to bring and every gramme is at the expense of something else). But seeing that Kierkegaard is arguably the most important persona in the history of Danish thought, it seemed obvious that he would have to be represented. Thus, the choice fell on this elegant collection of three of Kierkegaard's most important speeches, which represent the highlight of upbuilding existentialist thought. With its beautiful descriptions of nature, with its strong focus on the value of enjoying the present and that which is present and with its teaching us to be humble, the book seems the perfect choice for man in space.

It was Professor Emeritus and founder of the Kierkegaard Research Centre in Copenhagen, Niels Jørgen Cappelørn, who was given the task of choosing which work by Kierkegaard should be brought into space to represent Denmark. The choice seemed easy and almost self-evident.
The three main themes of "Lilien paa Marken og Fuglen paa Himlen" are silence, obedience and joy - themes that seem to be essential to a person who has dedicated himself to the one unique task of qualifying to space travelling - and the thread that binds it all together is passion. "Experiencing the greatness of the universe, the beauty and the wonder of it, can lead to existential silence and induce a wonder that is the beginning of all philosophy. In the chosen book, Kierkegaard describes how inexpressibly much one can find joy in that which is near", Cappelørn describes in several newspaper articles from 2014 (own translation from Danish)."

Andreas Mogensen was handed the book by Niels Jørgen Cappelørn at a ceremony on December 14, 2014. At that occasion, they spoke about the chosen book and the forthcoming space mission.

On May 11th, 2016, a space capsule containing the present copy of Kierkegaard's work, the three other items of Danish cultural heritage that made the cut of being sent into space (A Danish flag, a small grindstone from the Viking Age, and a copy of Hans Christian Andersen's fairy tales - both items in museum holdings) and Andreas Mogensen's research equipment reached earth safely. Ever since then, the book has been kept in the original bubble-wrap-envelope, in which is was transported in to and back from space, together with the certificate authenticating the unusual story of this magnificent book.

It goes without saying that the present book is the first - and so far only - book by Kierkegaard that has traveled into space.
The story of Kierkegaard being brought into space with the first Danish astronaut stole newspaper headlines in all of Denmark, but also in the rest of Europe - here are a few examples of how much attention this piece of cultural heritage was given: