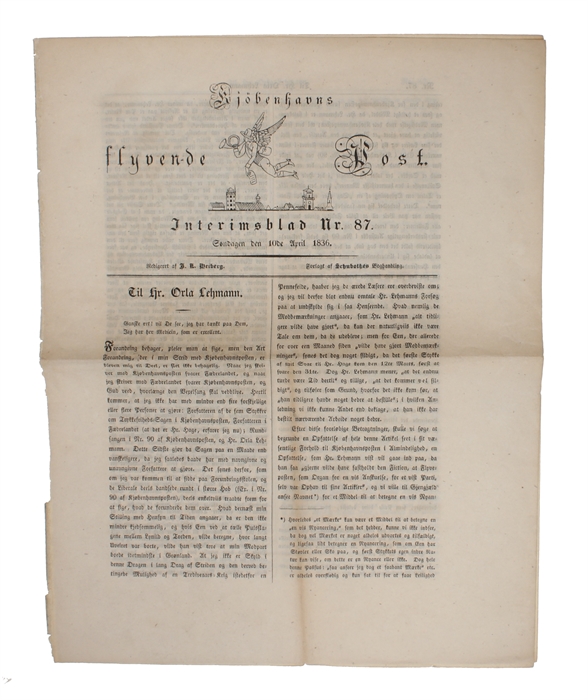 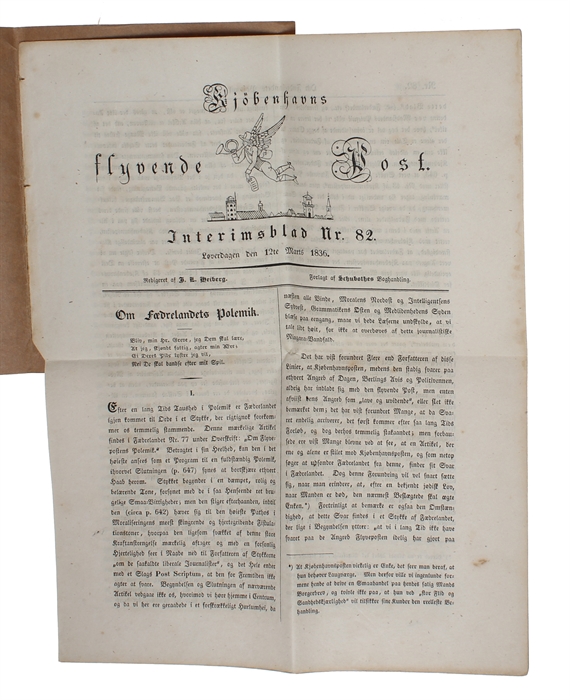 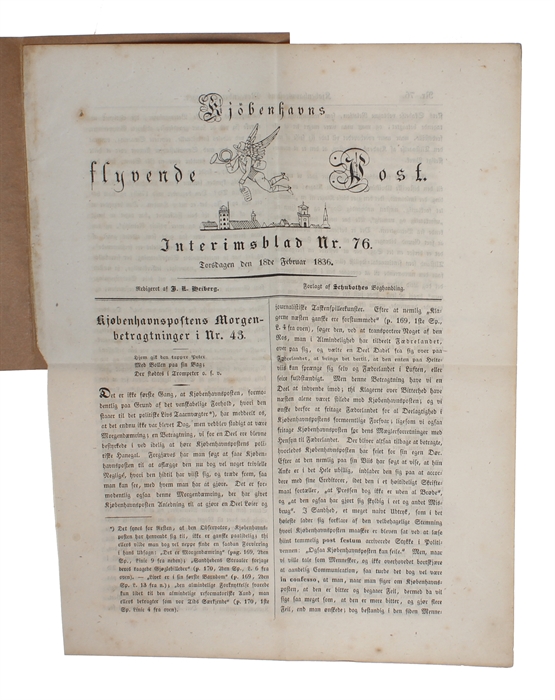 THE FIRST PUBLICATION IN KIERKAGAARD'S OWN NAME

Danish politics in the 1830'es was dominated by the slow implementation of rules for election for and assembly of the Estates of the Realm. But as they were only advisory, the papers and periodicals were not allowed to publish their opinions. In response to this, a liberal opposition arose around the two papers polemic papers "Kjøbenhavnsposten" and "Fædrelandet". The first point on the agenda for the Liberals was the fight for freedom of the press and the abolishment of censorship.

This fight for freedom of the press was something that found resonance with Copenhagen academics, and it stirred up a lively activity in Copenhagen. In 1835, active Liberals had encouraged King Frederik VI to support freedom of press, but had received an answer stating that he alone was able to evaluate what was truly the best for the people and the state. After this answer from the king, the "Society for the Correct Use of the Freedom of press" was founded by moderate liberals and young liberals, and at the end of the year almost 2.300 members had joined.

It was in the midst of all this that the 21-year old Søren Kierkegaard, then a student of theology, had his debut, with political-literary articles in "Kjøbenhavns flyvende post", in Interimsbladende, which were published separately. But as opposed to the predominantly liberal views of almost all other contributors, Kierkegaard's articles expressed distinctly conservative views.

His first publication [not present here], an ironic apology for the liberation of women, was published in December 1834, is signed "A.", and does not deal with freedom of press.

His three following publications (the three offered here), however, all concern the question of freedom of press and constitute satirical polemics against the two liberal papers "Kjøbenhavnsposten" and "Fædrelandet", against Orla Lehmann, the upcoming star of the liberal youth, and against all liberals in general. These three articles were published in February and April 1836. The two first are signed "B.", and the third, signed "S. Kierkegaard", constitutes the very first publication in his own name.

As is well known, the names under which Kierkegaard later publishes comes to play a significant role in his authorship and was extremely thought out. The foundation of this play with the reader is thus laid in the present publications, in which he begins to develop the style for which he later gained worldwide renown.

Common for all these early publications is the attempt at polemic and satirical power, at literary elegance and at a masterful and ceremonious critique of the prose of the opponent. - All something that comes to be dominant means in all of his later writings.

"Kjøbenhavns flyvende Post" [The Flying Post of Copenhagen] was one of the most important and most widely read cultural and literary periodicals of the period. It was edited and run by Johan Ludvig Heiberg (1791-1860), arguably the most famous cultural persona during the Danish Golden Age. He played a more significant role than any other author or thinker during this period and was the leading character of literature and philosophy in the 19th century. He introduced many German thinkers to Denmark, most importantly Hegel - who Kierkegaard would later oppose -, and he was part of almost all intellectual discussions of the Danish Golden Age. He was also a patron for many leading figures of the era.

Interestingly, several people thought that the first of the article on the freedom of the press was written by Heiberg. This was of dubious merit to Kierkegaard himself, as he was opposed to the circles around Heiberg and the Hegelian environment, but it was still this article - and this miscomprehension - that gave him a claim to fame. Another paper claimed that this "priceless" article had been written by Heiberg himself, who "had written many witty things, but never anything as witty as this." Also Kierkegaard's professor of philosophy, Poul Martin Møller, to whom Kierkegaard was very devoted and to whom he dedicated his first book (the only person outside of his family that Kierkegaard ever wrote a printed dedication for), loved the article and assumed that Heiberg had written it.

"He (Kierkegaard) had a lifelong antipathy toward the press, though he himself published reviews in various papers. His mistrust of the press as a legitimate organ of communication was based on several observations, one of which was that the press was the voice of the masses, rather than that of the individual. He viewed that voice with great skepticism and sarcasm in later years, averring that the crowd... even if technically correct... is wrong by the very fact of being the crowd. The truth can only be stated and practiced as individuals, especially as individuals before God. Admittedly, Kierkegaard's view of the masses was not well developed at this juncture."(D. Antony Storm).