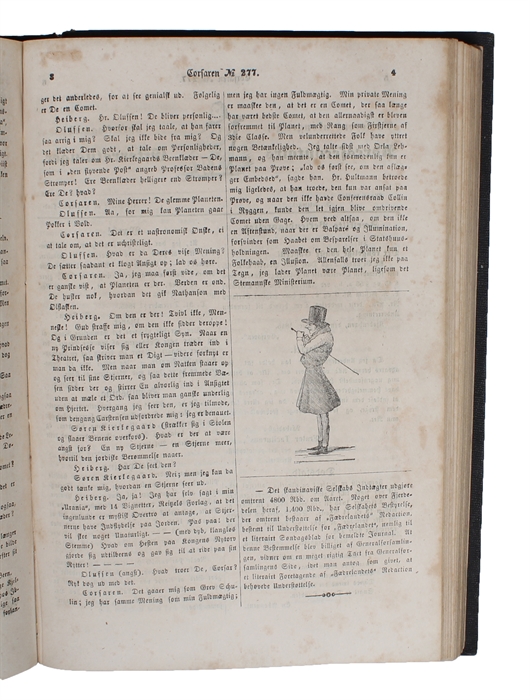 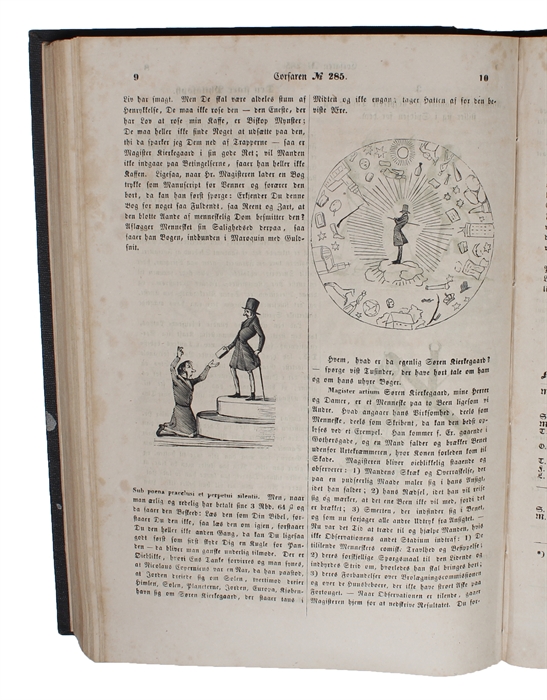 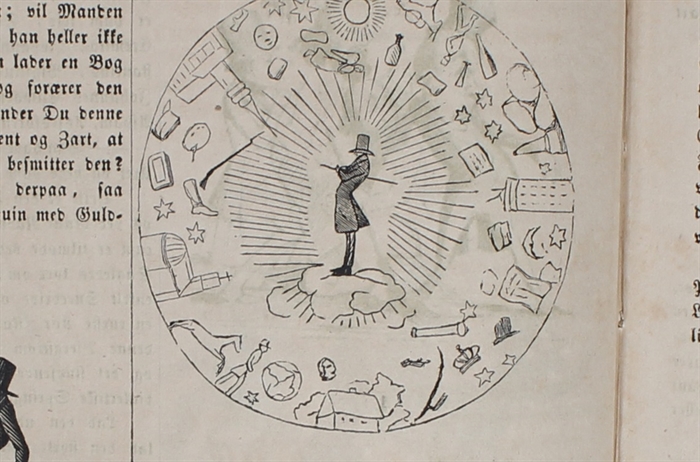 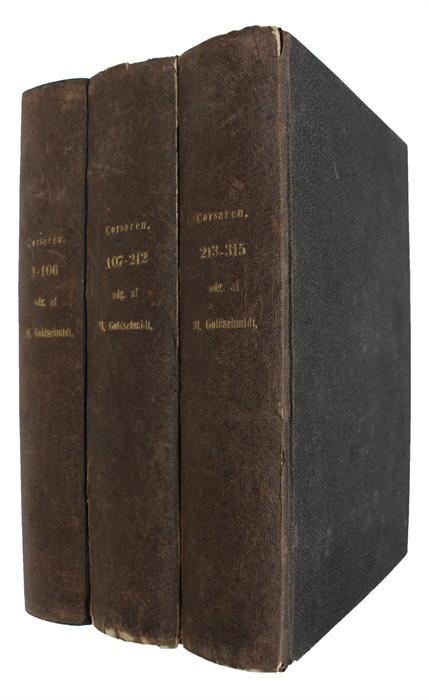 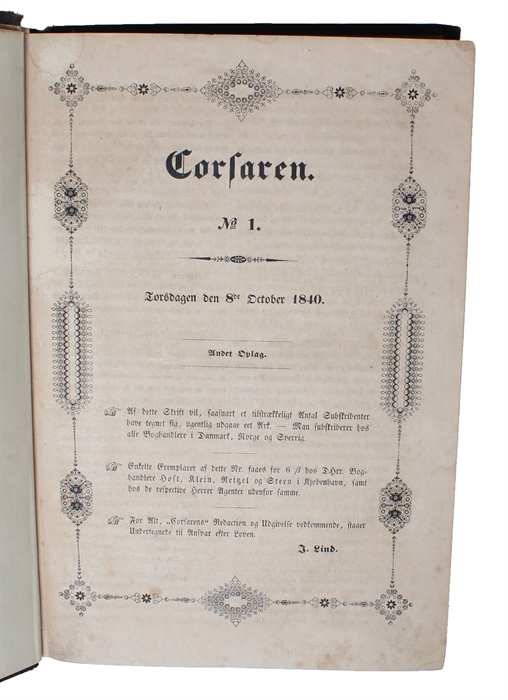 Lex 8vo. Bound in three contemporary uniform black full cloth bindings with gilt lettering and numbering to spines. Extremities a bit worn and hinges a bit weak. Some brownspotting. Overall a pretty good set. Richly illustrated throughout, both in the text and with plates.

A complete collection of all rightful issues of Goldschmidt's "Corsaren", the seminal periodical that took Copenhagen by storm and is now famous world-wide for its harsh ridicule of Søren Kierkegaard, with the iconic caricature of him that now constitutes the most famous "portrait" of the founder of existentialism.

With its witty and respectless character and its founder's awe of the French Revolution and republican ideas, "Corsaren" became the first periodical of its kind in Denmark. It invoked an entirely new genre, founded Danish political satire, and would prove groundbreaking in several respects. It was not only political and meant to be an "Organ for and sculpting of the mass opinion", but it also saw as its goal "to assert and cherish the purity and dignity of literature" (see Bredsdorff p. 28).

The first issue of "Corsaren" saw the light of day on October 8, 1840. The periodical was founded and owned by Meïr Aaron Goldschmidt who was also the actual editor and the author of the greater part of the writings in it. In 1846, Goldschmidt sold the periodical, and although it continued its existence until 1855, it almost immediately lost the significance it had when Goldschmidt owned it. The essence of the periodical thus counts the numbers 1 (from October 8, 1840) to 315 (October 2, 1846).

With its political stance and its provocative manner, it is no wonder that many issues of the groundbreaking periodical were seized, forbidden, and destroyed by the police censure, which accounts for lacunae in the numbering of the issues. This also accounts for the long list of fictional names of editors. Goldschmidt is never actually mentioned as the editor anywhere in the periodical, and, in the beginning, every time a number is seized, a new fictional editor-name appears on the following issues. Already issue nr. 3 was confiscated, and during Goldschmidt's ownership, 40 issues were seized and forbidden. Within the first 26 weeks of its existence, "Corsaren" had officially had no less than six different editors in Chief. In the six years that Goldschmidt owned "Corsaren", 14 different editor-names appear.

The seized numbers accounts for the lacunae in the numbering of the issues in the present set. Most of these were destroyed and never reached the public, to the great disappointment of the many loyal readers. A few of the seized issues were later released by the chancellery, and the subscribers would receive them, albeit several months later. This accounts for the five issues that are present here, although they were seized - the few seized issues that were not also destroyed.

The first issue of "Corsaren" took Copenhagen by storm; it was eagerly read and discussed, and there were countless rumours as to who the real editor/editors in reality was/were. Issue nr. 1 was sold out so quickly that a second issue of it followed almost immediately. Thus, often in the rare sets one encounters of "Corsaren", the early issues will be in second issue, as it was only in time that the editor realized the need to print in larger numbers.

Apart from its political stance and the great effect "Corsaren" came to have upon the shaping of Danish politics during the years that Goldschmidt ran it, the periodical is today associated with one towering subject, now known as the "Corsar-polemic" - the strife that emerged between the widest read and most influential periodical of the time and the person that would prove to be the greatest thinker that emerged from Danish soil, Søren Kierkegaard.

Goldschmidt and Kierkegaard had met each other for the first time right after the appearance of Kierkegaard's first book, in 1838. As we know, Goldschmidt had founded "Corsaren" in 1840, and Kierkegaard published his dissertation, "on the Concept of Irony", in 1840. On October 8, 1841 (nr. 49), the contents of the dissertation was briefly mentioned in "Corsaren", and the actual review followed in nr. 51 (October 22). The review was not bad, there was no real mockery, and Goldschmidt even deemed it "interesting". Like every other person in Copenhagen at that time, Kierkegaard now also know the identity of the true editor of "Corsaren", and when he met Goldschmidt again, coincidentally this time, he mentioned to him that he had no reason to be dissatisfied with the review, but that it lacked "composition" and that Goldschmidt ought to generally "pursue comical composition".

In February 1843, Kierkegaard's magnum opus, "Either-Or" appeared. Goldschmidt read it and was immediately infatuated by it. There was no end to his appreciation of this masterpiece, and he writes his review of it in "Corsaren", nr. 129, March 10 1843. He states "This author is a mighty intellectual, he is an intellectual aristocrat, he mocks the entire human race, portrays its wretchedness; but he is entitled thereto, he is an unusual intellect." And this is not the only time that Goldschmidt praises Kierkegaard.

One would think that Kierkegaard would be thrilled with this. Usually he is portrayed as a misunderstood, struggling author, who no-one really believed in and who was only vindicated after his death. But here, he is so highly praised, for his early works no less, by one of the most influential men in the country at the time. But somehow Kierkegaard was not just pleased with this. He might have felt left out for not being made fun of like everyone else in "Corsaren", and he was definitely not in agreement with Goldschmidt politically. Kierkegaard was a true conservative and did not appreciate the horrible liberal radicalism of "Corsaren". It clearly bothered him to be lauded by "Corsaren", as almost the only one.

After "Corsaren" had once again highlighted the immortality of Victor Ermeita (the pseudonym that Kierkegaard used for several of his books) in a review of a novel by Carsten Hauch, the praise seems to have become too much for the Conservative Kierkegaard. In a letter (that he never sent, though), he writes to "Corsaren", in the satirical manner of the periodical itself "kill me, but do not make me immortal!"... "Oh! This gruesome mercy and to be spared for ever designated a non-human, because Corsaren inhumanely spared him!... Oh! Let you be moved to pity, stop with your sublime gruesome mercy, kill me like everyone else!", showing how he actually wanted to be ridiculed by Corsaren like everyone else.

The defining moment came, when at the end of Decmber 1827, Kierkegaard writes an article in the paper "Fædrelandet", under the pseudonym of Frater taciturnus. Here, Kierkegaard not only publicly regrets not being ridiculed in Corsaren, he also implies that P.L. Møller (whom he dispised) is the true editor of "Corsaren", which came to mean the end of Møller's career. Møller had stood in for Goldschmidt during Goldschmidt's impeachement (he was accused of being the actual editor of "Corsaren"), which he had done as a favour to Goldschmidt, but he was not otherwise truly involved with the "dangerous" periodical.

As of 1846, things changed, and Goldschmidt began ridiculing Kierkegaard in "Corsaren". The first polemic against him is to be found in nr. 276, January 2), and the following issue of "Corsaren", nr. 277 (January 9) contains the first of many caricature drawings of Kierkegaard, defining the way that Kierkegaard came to be viewed ever after. The drawing was done by Corsaren's house illustrator Klæstrup and has gone down is history as THE most important depiction of Søren Kierkegaard ever. The moment it appeared - January 9, 1846 - became a defining moment in the life of the founder of existentialism. Not only was he depicted in a ridiculous way, caricatured so that everyone knew who it was, there also followed a polemical description of his appearance, for instance mentioning one trouser leg being shorter than the other. This one issue of "Corsaren" began the Copenhagen "trend" of discussing trousers of Kierkegaard - a "trend" that became so bothersome for Kierkegaard that he never really recovered from gerenal ridicule. And that was how "Corseren" began the momentous ridicule of Kierkegaard's outer appearance that came to hurt him so deeply.

In nr. 284, Goldschmidt once again praises Kierkegaard, reviewing his brilliant philosophical magnum opus "Concluding Unscientific Postscript", and although the following months of "Corsaren" contain several harsh polemics against Kierkegaard, which were so devastating to the self-conscious philosopher, Goldschmidt says that the defining moment that made him give up "Corsaren" and sell it, came when after the publication of "Concluding Unscientific Postscript", he met Kierkegaard on the street, which he had done so often, and Kierkegaard refused to greet him.

In "Concluding Unscientific Postscript", Kierkegaard admits to being the author of all the pseudonomous writings, which is another defining moment in his career. This prompted another caricature in "Corsaren". In nr. 285 from March 6 1846, Kierkegaard is famously depicted as the centre of the universe. Also in nr. 297, 299, 300, and 304, "Corsaren" polemicizes against Kierkegaard.

The caricatures were devastating to Kierkegaard, who keeps mentioning the polemics in his diaries. He so wishes that "Corsaren" would now stop the ridicule and let him be. The extent to which his trousers and his appearance in general had become a subject og gossip for the inhabitants of Copenhagen was almost unbearable to him. "I need only put on my trousers, and all eyes are on me, on my trousers", he writes, and elsewhere after talking about the vast general ridicule from the population of Copenhagen "such knowing mistreatment is one of the most painful things. Everything else comes to an end, but not this. To sit in a church and that then a couple of ruffians have the audacity to sit next to one only to constantly ogle one's trousers and mock one in a conversation that is so loud that one hears every single word." (S.K.P. VIII: 1A, 99). The ridicule would take no end, and Kirekgaard's private papers are full of examples of how he was made fun of and how everyone in Copenhagen would laugh at him and his trousers. "What Goldschmidt and P.L. Møller practice in the large, every individual practices in the small." (Ibid., 218). The effect of the caricatures in Corsaren was devastating, and Kierkegaard never really recovered from it.