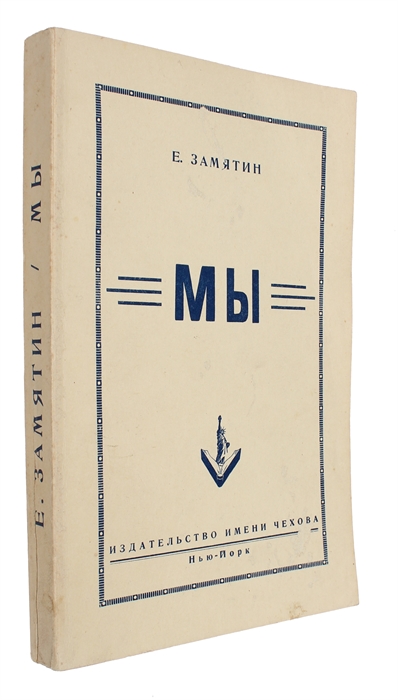 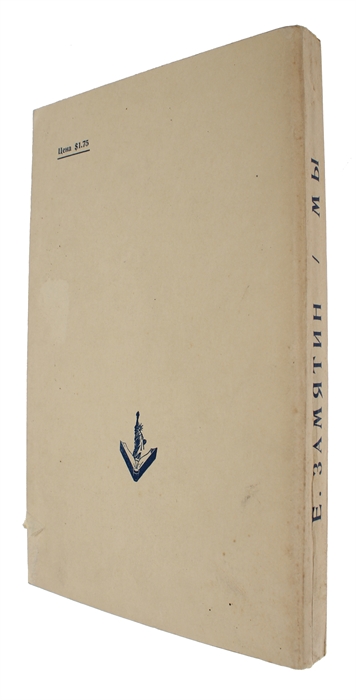 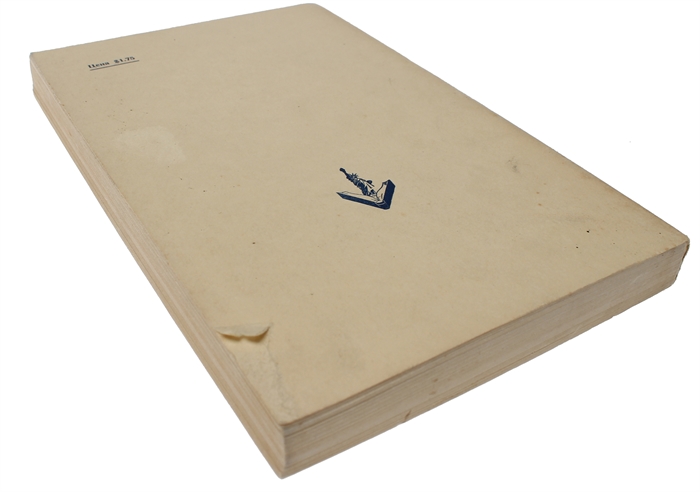 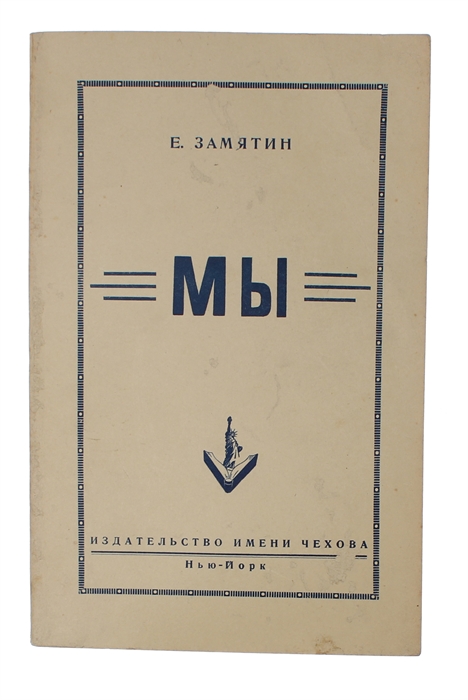 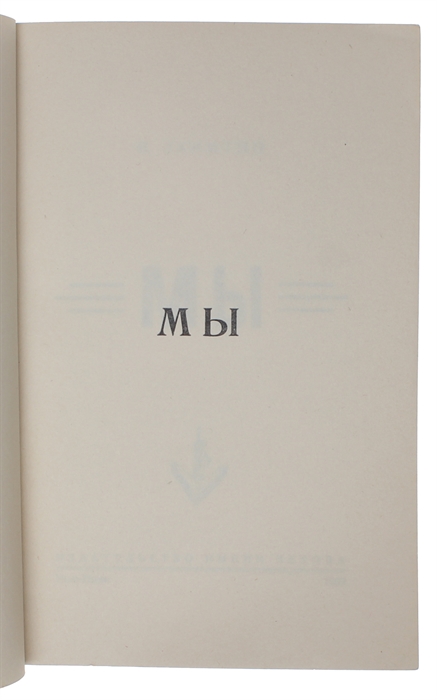 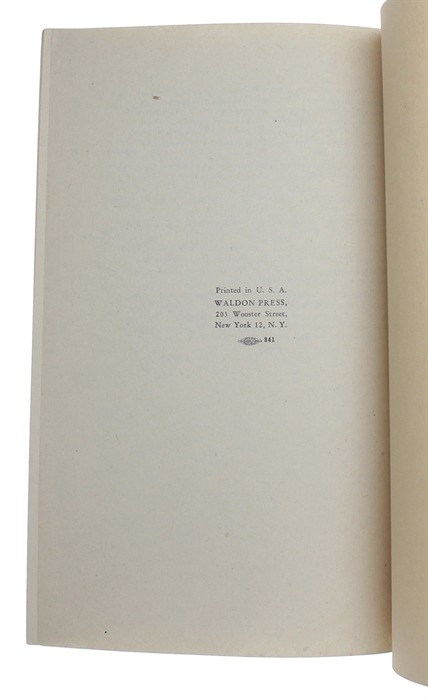 THE FORERUNNER OF ORWELL'S "1984" - THE FIRST MODERN DYSTOPIA

The very rare first edition of the original Russian version of one of the most interesting works of modern literature, namely Zamyatin's revolutionary novel "We", which counts as the first modern dystopia and as the basis and forerunner of Huxley's "Brave New World" and Orwell's "Nineteeneightyfour". This first appearance of the work in its original language is considered the authoritative edition and that which constitutes the basis of all new editions and translations of the work.

""We" is a Russian novel that first saw the light of day in English in New York. If it were not a Russian novel, that publication history would be moderately spectacular, but under the circumstances it is merely unusual. Pasternak's "Doctor Zhivago"... and many other twentieth-century Russian classics have all come out first on foreign soil and in a language other than Russian.

Zamyatin writes in one place that he composed the novel "We" in 1920, but he was known for his habit of revising and polishing, and it seems likely that the final text was not completed until the fall of 1921." (Clarence Brown, Introduction to the English translation).

The work was first published in 1924, by Dutton, in English, translated by Gregory Zilboorg. A French translation appeared as "Nous Autres" in 1929, translated by B. Cauvet-Duhamel. "By this time, Zamyatin was in considerable trouble at home over these foreign editions of a book that could not get permission to come out in its own country and language. He was merely one of the first of a distinguished company of Soviet writers to suffer in this way.

What finally furnished a "causis belli" to his enemies at home was the publication of "We" in Prague. A Czech translation by Václav Koenig appeared in 1927 in the Brno newspaper "Lidové noviny" " (Brown). That Czech translation, which came out in book form later the same year, seems to have been based on a faulty manuscript that differed in important ways from the original version.

Like Roman Jakobson, who had been involved in the Czech appearance of "We", the prolific Russian literary critic Marc Slonim was also in Prague in the late 20'ies. He knew of the novel and wished to bring it out in Russian, in the important journal "Volya Rossii". "But, knowing that the publication in Russian of a Russian book on foreign soil, and in a journal opposed to the regime at home, would cause Zamyatin grief, Slonim took extraordinary steps to make it appear that his text had actually resulted from a retranslation from the Czech. This might protect Zamyatin from being charged with abetting the publication by supplying a Russin manuscript.

The deliberately cryptic editorial note in "Volya Rossii" reads: "One of the most interesting works of modern literature, E. Zamyatin's novel "We", depicting the life of people in the 26th century, has not yet appeared... in Russian... With the editor's gracious permission, we herewith present excerpts from the novel... To enhance his deception, Slonim took the even more extraordinary (and deplorable) step of actually rewriting parts of the Russian manuscript in his possession. Of this thoroughly corrupt text only excerpts were actually published: twenty-two chapters, not all of them complete, of the forty in Zamyatin's novel... This abridged Russian verison, further camouflaged by the editor's well-meaning mutilation of Zamyatin's text, hardly qualifies as the first appearance of "We" in its original language. For that long-postponed event it had to return to New York, where, thenty-eight years after its first English shadow had appeared, the genuine article was published in Zamyatin's own Russian words: "My". New York: Izdatelstvo imeni Chekova (Chekov Publishing House), 1952.

That Russian text is the basis of this new English translation, and it is the one that was finally published, in 1988, on Russian soil.

"We" was written in response to Zamyatin's personal experiences during the Russian revolution of 1905, the Russian revolution of 1917, his life in Newcastle - where, being a trained marine engineer, he was sent to oversee ice-breaker construction for the Imperial Russian Navy -, and his work in the Tyne shipyards during the First World War, where he observed the collectivization of labour on a large scale.

"We" is generally accepted as the grandfather of the satirical futuristic dystopia genre. Depicting the totalitarian and conformative aspects of modern industrial society and taking them to an extreme conclusion, the novel portrays a state in which free will and free thought are evil entities that can only cause unhappiness and unbalance. The entire state and the lives of the citizens are controlled with mathematical precision, the basis of which is the system of industrial efficiency created by Frederick Winslow Taylor, the great oracle of the state.

It is generally believed that both Orwell and Huxley found their main sources of inspiration in Zamyatin's revolutionary novel. Although Huxley claimed not to have been acquainted with "We", Orwell indicated that he must have been lying about that. In "Player Piano" (1952), Kurt Vonnegut famously said that in writing it, he "cheerfully ripped off the plot of "Brave New World", whose plot had been cheerfully ripped off from Yevgeny Zamyatin's "We"."

Orwell read "We" in the French translation in 1948, after which he wrote his famous review of the novel. About eight months later, he began writing "Nineteeneightyfour". He is reportedly said himself that he was taking it as the model for his "next novel". Among reviewers and literary critics, Zamyatin's influence on Orwell seems to be beyond dispute. Indeed, the two novels have so many features in common, that it seems impossible for "Nineteeneightyfour" not to have been directly inspired by "We".

"It is perhaps better not to be too solemn about Zamyatin's wonderfully appealing novel. Its distinction as a work of art and as a political statement about several peculiarly modern dilemmas will need little defence - its having constantly found a wide international audience ever since it first came out in 1924 seems an earnest for that. And for George Orwell, author of "1984", and for certain others bent on creating their own dystopias, it appears to have been THE crucial literary experience." (Brown, pp. XV-XVI).