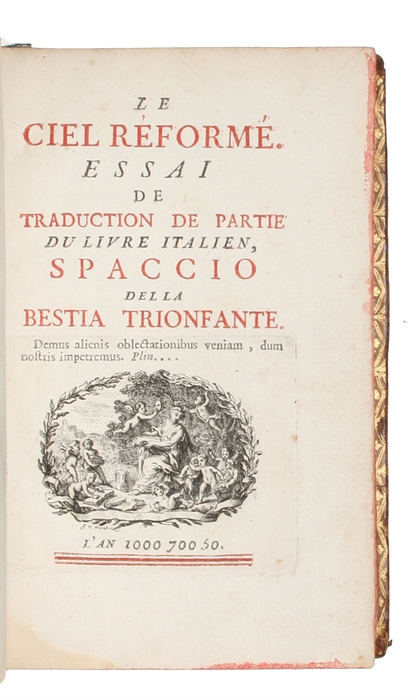 Scarce first translation into French of Giordano Bruno's seminal "Expulsion of the Triumphant Beast", being the first part of any of Bruno's works to be translated into French and presumably the second translation of any of Bruno's works into any language, only preceded by the equally scarce first translation into English of the same work (1713). "The Expulsion of the Triumphant Beast" constitutes one of Bruno's main works and that of his works which proved to be most influential throughout the 18th and 19th centuries, profoundly affecting both science, philosophy and religion, as it "turns to social ethics and religious reform, but in a cosmic setting". (Copenhaver & Schmitt, p. 301).

Bruno's world-view as presented in the "Spaccio" cannot but have appealed directly to the French thinkers of the 18th century, when the first part of any of Bruno's works thus appears in French for the first time. The Enlightenment thinkers of 18th century France must have found much resonance with the extreme and provocative views held by the - until then - overlooked Renaissance thinker, who was burned on the stake due to his non-conformist views. "Magic, pantheism, idolatory, demonolatory, apostasy - just these few outrages from the long list in the "Spaccio" would have been enough to anger the authorities, but there were more besides: Bruno doubted immortality, taught metempsychosis, recommended free-thinking, deserted positive for natural religion, criticized the Bible, defamed the Jews, slandered the Protestants, betrayed the Catholics, and condemned civil government besides." (Copenhaver & Schmitt, p. 302). - Bruno's thoughts as expressed in the "Spaccio" doe not leave those of a Voltaire far behind.

Bruno's works, the first editions of which are all of the utmost scarcity, were not reprinted in their time, and new editions of them did not begin appearing until the 19th century. For three centuries his works had been hidden away in libraries, where only few people had access to them. Thus, as important as his teachings were, thinkers of the ages to come were largely reliant on more or less reliable renderings and reproductions of his thoughts. The first translations of his works thus proved to be of seminal importance to the spreading of his ideas.

As Jacobi states in the preface to the second edition of his "Letters on Spinoza..." (1785), "This strange man was born, one knows not in which year, in Nola, in the Kingdom of Naples; and died on February 17th 1600 in Rome on the stake. With great diligence Brucker has been gathering information on him, but in spite of that has only been able to deliver fragments [not in translation]. For a long time his works were, partly neglected due to their obscurity, partly not respected due to the prejudice against the new opinions and thoughts expressed in them, and partly loathed and suppressed due to the dangerous teachings they could contain. On these grounds, the current scarcity of his works is easily understood. Brucker could only get to see the work "De Minimo", La Croce only had the book "De Immenso et Innumerabilibus" in front of him, or at least he only provides excerpts from this [also not in translation], as Heumann does only from the "Physical Theorems" [also small fragments, not in translation];" (pp. (VII)-VIII - own translation from the German).

"Bruno's most representative work, "Spaccio de la bestia trionfante" (The Expulsion of the Triumphant Beast), published in an atmosphere of secrecy in 1584 and never referred to as anything but blasphemous for more than a century, was singled out by the church tribunal at the summation of his final trial. That is hardly surprising because the book is a daring indictment of the corruption of the social and religious institutions of his day. The "triumphant beast" signifies the reign of multifarious vices. Cast in the form of allegorical dialogues, Bruno's work presents the deliberations of the Greek gods who have assembled to banish from the heavens the constellations that remind them of their evil deeds. The crisis facing Jove, the aging father of the gods, is symbolic of the crisis in a Renaissance world profoundly disturbed by new religious, philosophical, and scientific ideas." (From Arthur D. Imerti's 1964 translation of the work into English).

"Bruno, who had already used geometric diagrams and philosophical terms to present n infinite universe, now wrote a dialogue in which he transformed the cosmos by transforming its imagery. He called it "The Triumphant Beast", a phrase that brought to mind the book of Revelation [...] Unlike most of his contemporaries, who gave the universe about six thousand years of existence since creation, the Nolan philosopher had already proclaimed that it was infinitely old; in "The Expulsion of the Triumphant Beast", he insists that the universe holds cultures and memories that have come and gone and will come and go again." (Rowland, pp. 164-65).

Giordano Bruno was born in Nola in Southern Italy in 1548, and entered the Dominical order in Naples at the age of 18. While pursuing theological studies, he also thoroughly studied the ancient philosophers and began doubting some of the teachings of the Catholic Church. When he was in Rome in 1576, these doubts became known to the authorities of his order, and an indictment for heresy was prepared against him. Before he could be arrested, he escaped and began a long journey which took him to many European countries, among these England, where his most important works are published, until in 1592 he was denounced to the Inquisition and arrested. In 1593 he was taken to Rome, imprisoned, and subjected to a 6 year long trial. He firmly refused to recant his philosophical opinions, and in 1600 he was condemned for heresy, sentenced to death, and burned alive.

"Bruno burned for philosophy; he was killed for moral, physical, and metaphysical views that terrified and angered authorities." (Copenhaver & Schmitt, p. 315).