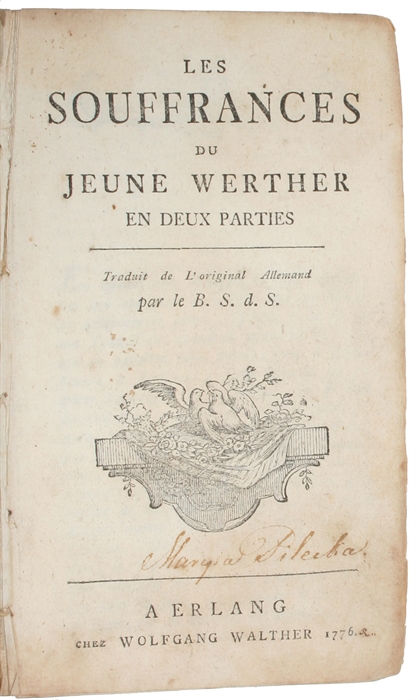 PAVING THE WAY FOR FRENCH ROMANTICISM

The rare first edition of what is supposedly the first French translation of Goethe's monumental work "Die Leiden des jungen Werthers", one of the most influential and popular books of the 18th century.

The first edition in German appeared in 1774, and the work was so popular that new editions followed immediately after; already the following year the book was printed nine times, and it was almost immediately translated into all European languages, the French being one of the first, together with a Dutch edition from the same year. The first English translation appeared in 1779, and after that translations into almost all other European languages followed.

The French translation of the work was of immense influence, and after the first translation (the present by Saeckendorf) appeared in 1776, several other translations and numerous editions appeared immediately after, bearing testimony to the status of the work as an absolute best-seller in France. In fact, as much as 14 adaptions, translations and re-issues of Werther in French appeared Between 1776 and 1779.

It has previously been assumed that a French translation was published in 1774, but this seems to be incorrect; the supposed French 1774 edition cannot be identified anywhere, and the present translation by Seckendorf is now generally accepted as being the very first French translation, here present in the first edition. In the same year a translation by Deyverddun appeared, and in 1777 one by Aubry.

This, Goethe's first novel, is written in the form of letters, and it caused him almost overnight fame. The style of writing has influenced an entire generation of writers. No other of Goethe's works has been so widely read by his contemporaries, and no other work in general has been of as great importance to the Sturm und Drang-period; the work also caused the so-called "Lesesucht" (the important and wide-ranging debate in late 18th century on misreading and on dangerous and harmful literature). The impact it had on not only literature, but on almost all aspects of life at the time, was immense and unheard of. Werther might well be the first cult-figure ever; -a true "Werther-Fieber" broke loose, resulting in a distinct Werther-fashion (yellow trousers, yellow waist-coat, blue coat, high turned-down boots, round felt hat and un-powdered hair, as described by Goethe in the novel), Werther-perfume, Werther-cups etc. Numerous people susceptible to influence actually killed themselves in sympathy with the suffering Werther or overwhelmed by the gulf that separates the outer from the inner world suggested in the novel (the first copycat-suicides of the world, -many of the bodies were found with the book in their hands), and the work incited the romantic urge for revolution; the work is also said to have been Napoleon's favourite novel, which he carried with him at all times. It was the French edition of this monumental work that Napoleon carried with him to Egypt and after his own testimony read eight times during that period.

In fact, the influence that this novel had on French culture and literature was of groundbreaking character. It was the first German best-seller in France, and due to it, an entire school in French literature of French Werther imitations (and parodies) emerged, changing the course of French 18th century literature. It is also this novel and the rendering of it into French that paves the way for French Romaticism, and it seminally influenced many of the most famous French writers of the Romantic era.
As Goethe put it in 1779, "Le francais sont sous le charme de Werther".

Goethe himself was very surprised by the impact of the work, and said about it: "Die Wirkung dieses Büchleins war groß, ja ungeheuer, und vorzüglich deshalb, weil es genau in die rechte Zeit traf." (Dichtung und Wahrheit). This literary masterpiece may be called the first German novel of world literary class, and it not only seems like a modern work of fiction, it is a work which has irreversibly shaped the feeling of life which is specific to modern man.