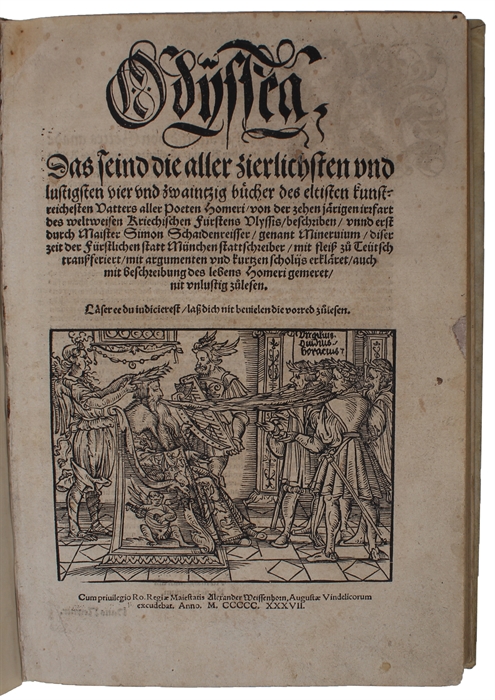 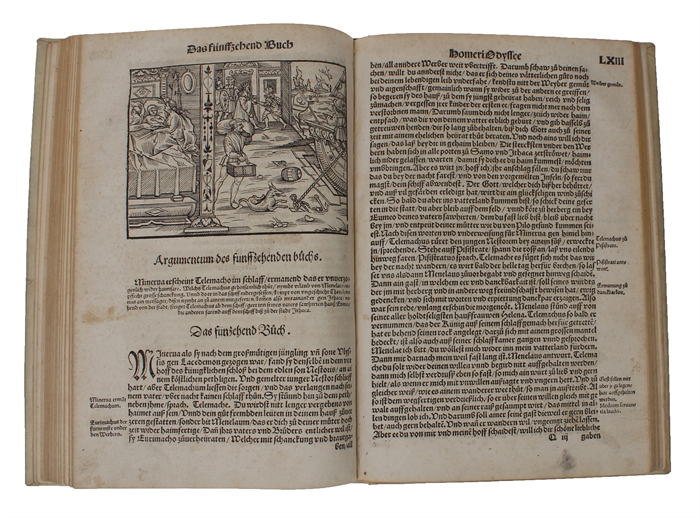 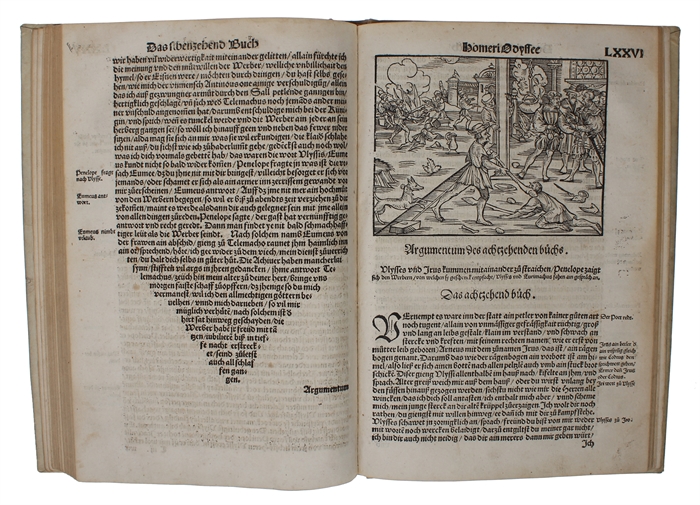 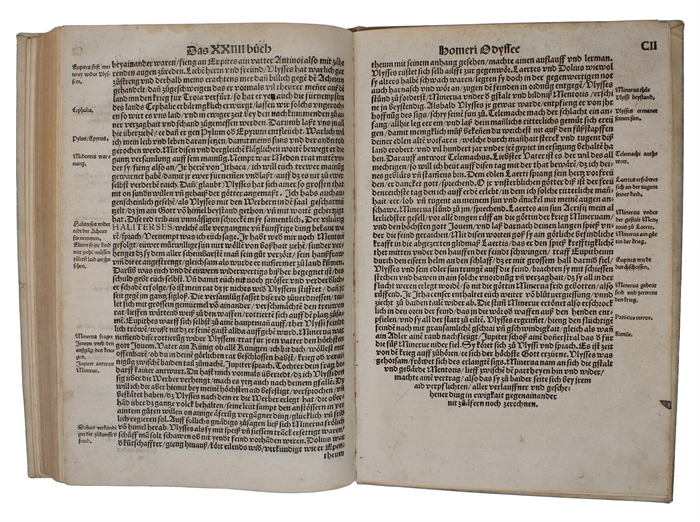 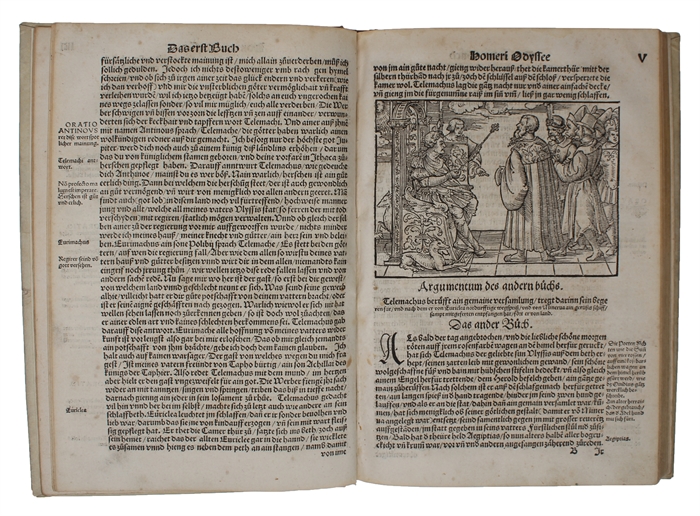 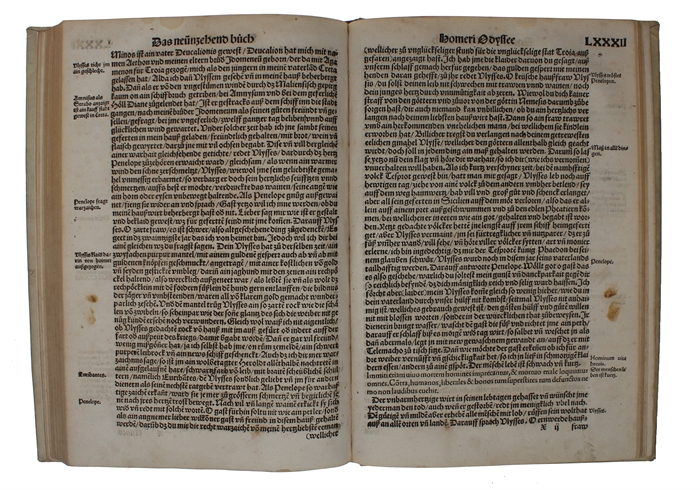 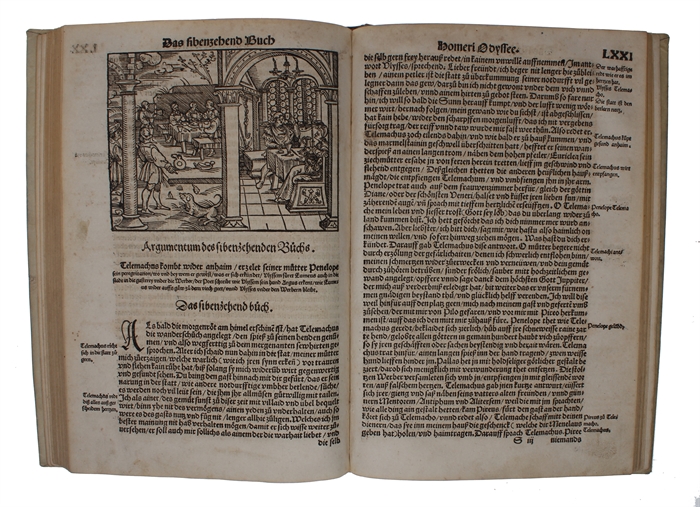 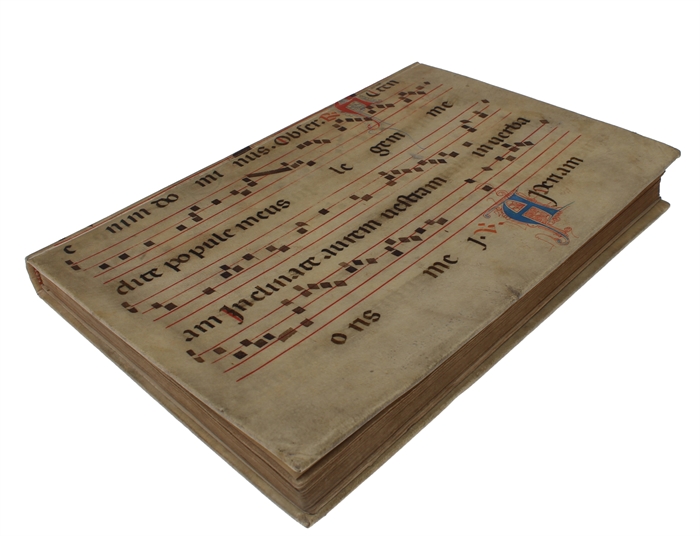 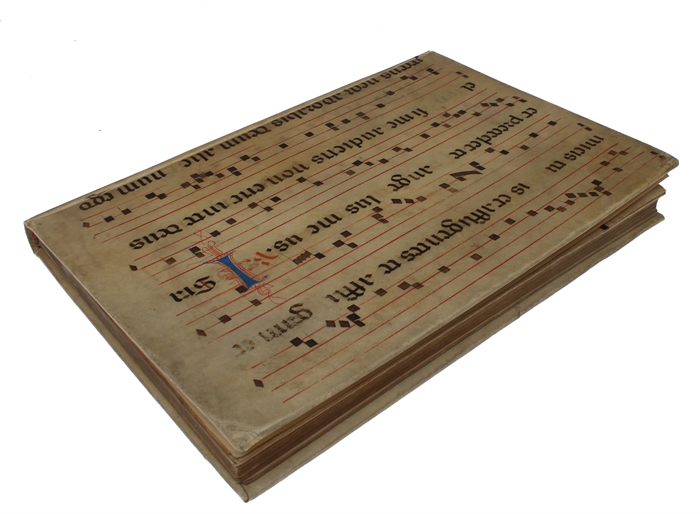 THE FIRST TRANSLATION OF THE ODYSSEY TO ANY MODERN LANGUAGE

Folio. Bound in a late medieval liturgical manuscript-leaf of vellum with handpainted capitals in blue and red, over cardboard-binding, and housed in a vellum-box. Title-page with a small paper-restoration to the blank, outer margin, far from affecting printing or illustration. Light brownspotting throughout, but overall a truly excellent copy with no significant flaws. The woodcuts are all clear bright. (6), CII ff. Large woodcut title-illustration and 18 large woodcut illustrations in the text (measuring 10,8x14,3 cm.).

Extremely scarce first edition, first printing (with the 1537-title-page), of the very first translation of the Odyssey into any vernacular language. This monumental work represents a milestone in the history of classical literature and marks the beginning of the dissemination of the Homeric works to a wider Renaissance-audience.

Not only is this the first German translation, in the exceedingly scarce first printing, and the first translation into any vernacular language, of one of the most important works in the history of literature, antiquity, and Western culture - one of the oldest extant works of literature still read by contemporary audiences -, it is also the very first edition of any Homerian work to appear in any language other than Greek or Latin, and as far as we can see, also the first illustrated edition of this masterpiece to appear, containing the very first printed illustrations of Homer's Odyssey.

Together with the Bible, Homer's Odyssey constitutes one of the most influential texts in world history, and the present edition constitutes the forerunner of the thousands of translated editions available today.

"This is the first modern-language translation of the "Odyssey". Thirty printings of Latin translations of the Odyssey and Iliad had been produced in German-speaking territories before it, and Schaidenreißer's translation represents the Humanist push for the dissemination of ancient texts to an audience beyond traditional learned circles.
Translators feared that the less educated could misunderstand or misuse classical thought, but believed the benefits were great enough to attempt the undertaking. For these reasons, 16th-century translators took steps to ensure a 'proper' understanding of classical authors. Schaidenreißer (ca. 1500-1573) employs a contextualizing introduction and illustrations that highlight the most pedagogically useful content to make the story relevant to readers of Reformation-era Germany and to downplay morally ambiguous content." (From the exhibition at the Beineke-library, Yale).

The book is wonderfully printed, on large paper of excellent quality, and with many large woodcut illustrations. The illustrations, which are of enormous importance in the history of the reception of the Odyssey, are attributed to the school of Hans Weidiz (Röttinger) or Jörg Breus.

"The "Iliad" and the "Odyssey" have inspired artists in all periods and mediums. The dramatic scenes and detailed descriptions invite visual representation and stimulate creative interpretation. Ancient artists depicted scenes from the Homeric epics on vases, wall paintings at Pompeii, and miniature marble Roman tablets. A handful of surviving illustrated manuscripts suggest the possibilities for illustrating and decorating the texts.
Since the sixteenth century, artists and sculptors have portrayed many scenes and characters from the Iliad and the Odyssey as both narrative and allegory. Giulio Romano, Peter Paul Rubens, Angelica Kauffmann, Nicolas Poussin, Claude Lorrain, Eugène Delacroix, Auguste Rodin, Georgio de Chirico, Henri Matisse, and Andy Warhol (after de Chirico) are just a few examples.
Early printers of Homer focused on making the texts of the epics available for study rather than producing expensive illustrated editions. It didn't take long, however, for printers to discover that illustrations could expand their audience and potential profits." (University of Chicago Library).

The present edition represents the earliest example of this endeavor considering the Odyssey and inscribes itself in an ancient tradition that goes back to early Greek vases.

The philologist, author, and humanist Simon Schadenreisser (1497-1572) is today primarily remembered as the seminal first translator of the Odyssey into a modern language and thus as the founder of the tradition of translating Homer.

"In German-speaking lands, the Odyssey initially fared much better than the Iliad, perhaps because Odysseus’ s adventures could be packaged as a hybrid of travel narrative and popular romance. A 1570 reprint of the 1537 German translation of the Odyssey by Simon Schaidenraisser promises its readers "a beautiful, useful, and funny description of the life, luck, and misfortune" (ein schone nutzliche und lustige Beschreibung von dem Leben, Gluck und Ungluck) of its hero, while the original 1537 translation advertises the poem as "very delicate and funny" (aller zierlichsten und lustigen), phrasing that accords with the common tendency (stemming from Aristotle [Poetics 1453a]) to view the Odyssey as a comic poem, or at least as a "tragedy with a happy ending" (tragedia a fin lieto), as the Italian literary critic Giraldi Cinzio termed it (Cinzio 1554, 220 - 4)" (Jessica Wolfe in: Cambridge Guide to Homer, p. 497).

The first edition of this landmark printing is of the utmost scarcity. We have not been able to locate one single complete copy for sale at auctions within the last 50 years anywhere in the world. OCLC lists three copies worldwide, two in the US, one in the UK.

Not in Adams; not in STC (merely second issue)