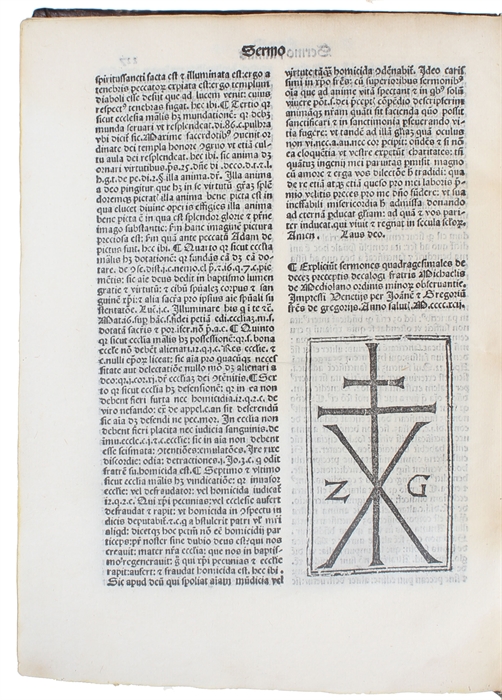 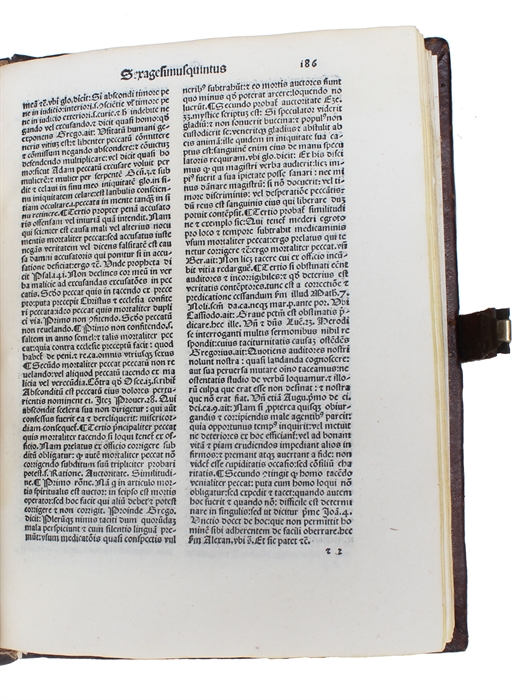 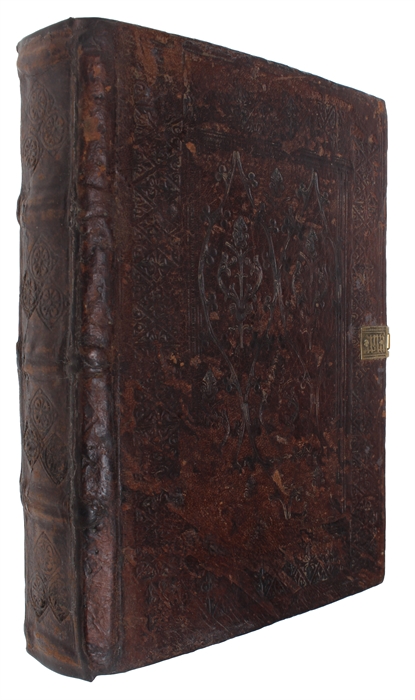 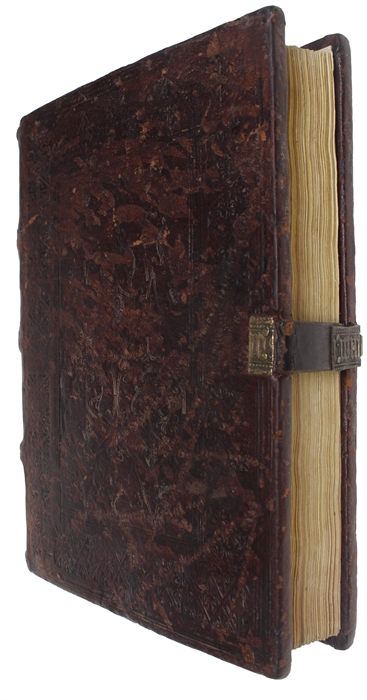 THE VERY FIRST DESCRIPTION OF THE MOUNT OF PIETY BANKING SYSTEM

4to. Bound in a beautiful contemporary blindstamped full calf binding with brass clasp, neatly recased preserving most of the old binding. First leaf browned, a bit soiled, and with a small library stamp. Back free end-paper with professional repair in lower outer margin. A bit of minor dampstaining to a few leaves, but overall very nice and clean (possibly carefully washed). A fine copy. 227 [numbered] ff. + 5 (last blank) ff.

First printing of Carcano's posthumously published landmark work constituting the very first description of the Monte di Pietà/Mount of Piety banking system - an institutional pawnbroker run as a charity in Europe, developed in cities as a reform against Jewish money lending. Incunables relating to economics and especially banking are of the utmost scarcity; Kress lists only two works, both by Bernadino di Siena, and Goldsmith lists six works.

According to Christian belief, money lending or usury (usury, in the scholastic thought of the Middle Ages, referred to a lender's intention to obtain more in return that the principal amount of the loan. As a general rule this meant that any interest-taking was usurious and forbidden) was prohibited. This, however, did not diminish the demand for capital, and since it was acceptable for Jews to accept interest rates for money, they in effect soon became the bankers of the day. The disparity between the supply and demand of money consequently resulted in the interest rates soaring to unreasonably high percentages - sometimes reaching as much as 40%.

These excessively high rates soon became a practical ethical problem; the rates resulted in very little economic mobility and many people within the Church found them morally reprehensible:
"In the second half of the [15.]century the advent of montes pietatis presented a new development in the area of credit. Designed to provide credit facilities for the needy small borrowers, the creation of these montes, or charitable pawnshops, was caused by the desire to counter the influence of the private money-lenders and ultimately to expel the Jewish pawnbrokers who had been invited by many Italian municipalities to run the small loan business." (Houkes, P. 159)

"In the spring of early 1462 the Franciscan friar Michele Carcano of Milan was preaching in Perugia, having returned to Italy after a stay of over one year in the Holy Land. His demands, directed at to the Priori of the city, were that the moneylending charter granted to Jews be rescinded immediately to release "the above-mentioned city of Perugia from the bonds of excommunication" and that there be established a Monte di Pietá for the relief of the poor. The Council of Priori met and decided to comply with the friar's request, approving officially his proposals. At the same time the city's government set up a plan to raise the funds, which were not easily available, needed for the new Monte. The solution, albeit a paradoxical one, was soon found. The Jews, seen as docile victims, were called upon to furnish to the pious institute the first means of subsistence, in the form of an interest-free loan amounting to the enourmus sum of 3000 florins "to establish and expedite the above-mentioned Monte" as the institute for moneylending. " (Myers, The friars and jews in the Middle ages and Renaissance).

Not in Kress, Einaudi or Goldsmith.