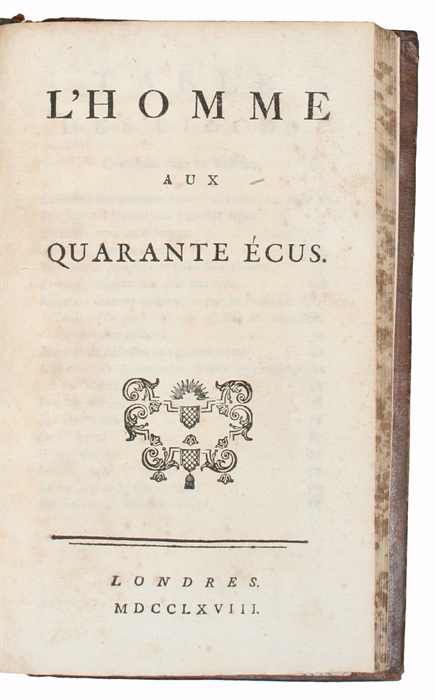 VOLTAIRE'S ONLY WORK ON ECONOMICS

Published the same year as the original Geneva-edition.
"L'Homme aux Quarante Écus" (The Man of Forty Crowns) is the only work in which Voltaire occupies himself with the sole subject of economy. It was created as a fable in response to the economic policies of the physiocratic school: "The wealthy industrialist could smile as he endorsed the doctrine that he should not be made to pay the tax because he added nothing to wealth [since they believed only land could yield a surplus]. This anomaly inspired Voltaire to write a lively satire, The Man with Forty Crowns; in it the wealthy financier who escapes taxation taunts the poor farmer who pays taxes for both, although his income is only forty crowns." (Oser. The Evolution of Economic Thought, p. 29).

Despite Voltaire's satirical attitude towards the wealthy industrialist he did advocate luxury as a positive economic good. In "Le Mondain" (1736) and "La Défense du Mondain" (1737) he praised luxury goods as both a desirable personal philosophy of life and as means of assuring national prosperity.