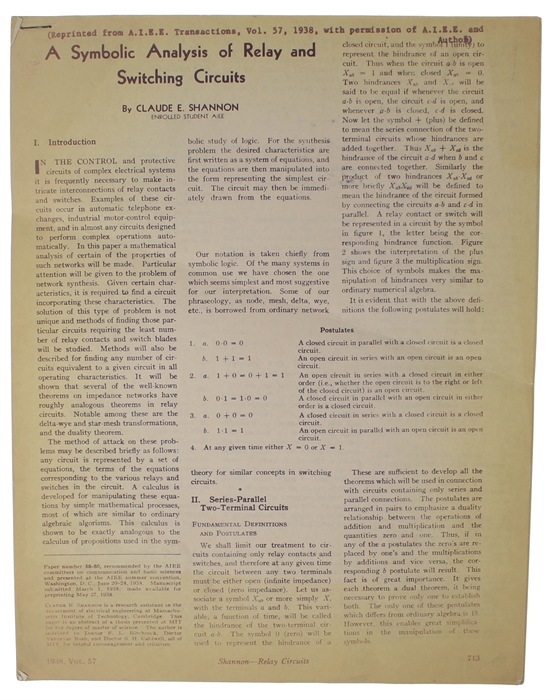 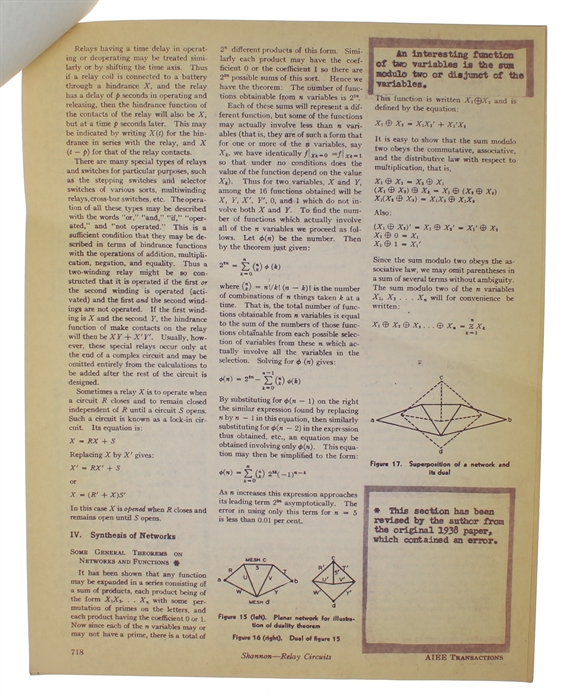 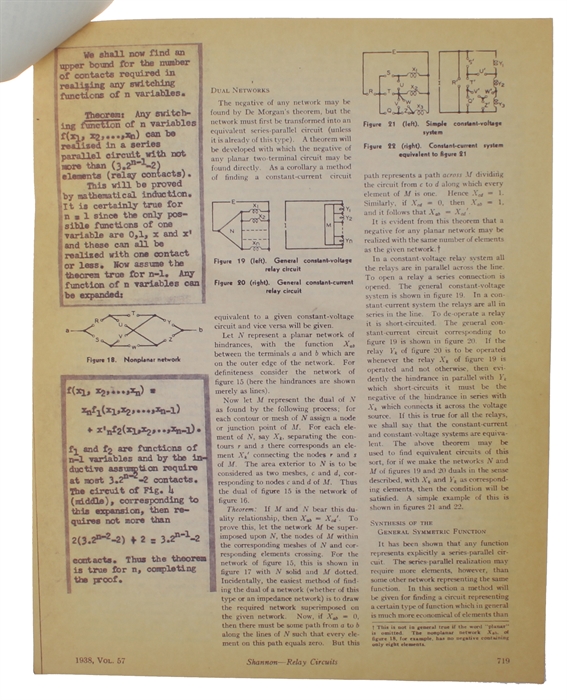 A Symbolic Analysis of Relay and Switching Circuits.

New York, American Institute of Electrical Engineer [AIEE], [1938 or after].

Folio (280 x 218 mm). A spirit duplicated (dittoed) copy of a corrected version of the originally published AIEE-paper. From the library of Claude Shannon (unmarked). Only printed on recto, stapled in upper left corner. To upper margin of first leaf: "Reprinted from A.I.E.E.  Transactions, Vol. 57, 1938, with permission of A.I.E.E. and Author". P. 718 with the note: "This section has been revised by the author from the original 1938 paper which contained an error", and pp. 718 and 719 with parts of the original text having been replaced with a different text. Paper creased and yellowed, traces from leaves having been folded. Pp. 713-723.

Corrected reprint of Shannon's landmark thesis, from his own archive, of perhaps the single most important theoretical step in the development of the modern computer. He demonstrated the concept of using 0 and 1 as true/false values to allow arithmetic by relay circuits, and the work constitutes "a landmark in that it helped to change digital circuit design from an art to a science" (Goldstine, 1972, p. 119) - ""a basic idea on which all modern computers are built." (Shannon's obituary, the New York Times). Shannon was awarded the Alfred Noble Prize of the American Society of Civil Engineers for his master's thesis in 1940.

Shannon's seminal paper, described by Psychologist Howard Gardner as "possibly the most important, and also the most famous, master's thesis of the century", explored for the first time the analogy between symbolic logic, in particular Boolean algebra - and electrical relay and switching circuits. After analysing various forms of circuits and networks, Shannon concluded: "It is possible to perform complex mathematical operations by means of relay circuits. Numbers may be represented by the positions of relays or stepping switches, and interconnections between sets of relays can be made to represent various mathematical operations. In fact, any operation that can be completely described in a finite number of steps using the words 'if,' 'or,' 'and,' etc. ... can be done automatically with relays." (from the present paper).

"Shannon left Gaylord in 1932 for the University of Michigan, where he studied both electrical engineering and mathematics, obtaining in 1936 a bachelor of science degree in both fields. He then found a way to match his tinkering capacities with his knowledge in electrical engineering, working in the Department of Electrical Engineering at the Massachusetts Institute of Technology (MIT) on the maintenance of the differential analyzer that had been constructed by Vannevar Bush (1890-1974). Bush was to become his mentor over the next decades. It was in Bush's department that Shannon wrote his master's thesis [...]
The insight was decisive: It constituted "a landmark in that it helped to change digital circuit design from an art to a science" (Goldstine, 1972, p. 119). His study dealt with the circuits based on relays and switching units, such as automatic telephone exchange systems or industrial motor equipment. He developed rigorous methods for both analysis and synthesis of circuits, showing how they could be simplified. At this time, he probably had his first intuitions on the relations between redundancy and reliability, which he was to deepen later. That his stance was both theoretical and practical becomes clear at the end of his master's thesis, where he illustrated his approach with five circuits: a selective circuit, an electronic combination lock, a vote counting circuit, a base-two adder, and a factor table machine." (DSB).

Shannon's thesis became the theoretical basis for almost all electronics and computer industries that were developed after World War II .