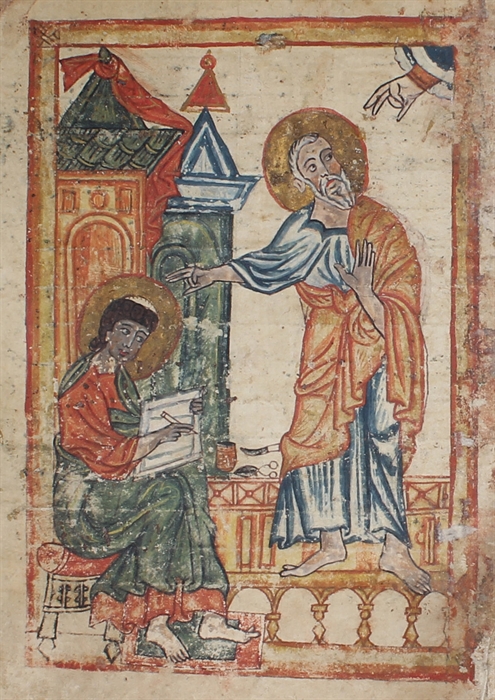 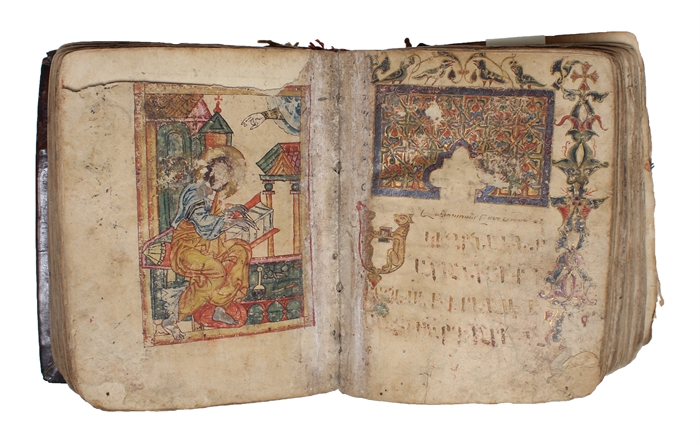 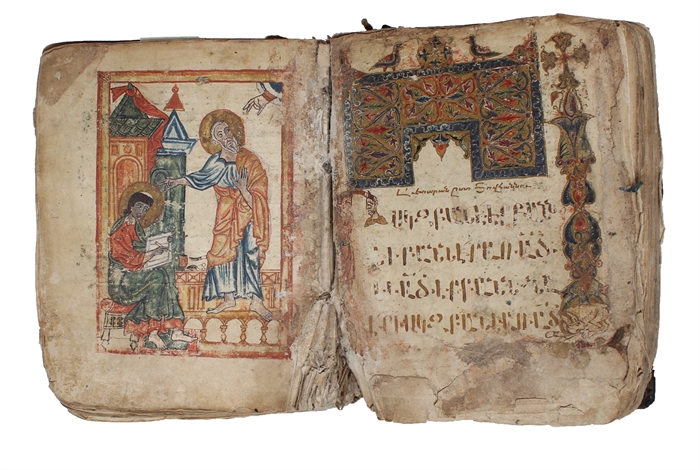 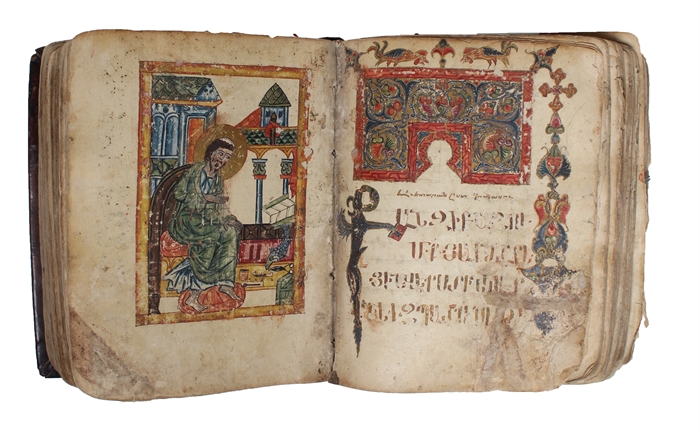 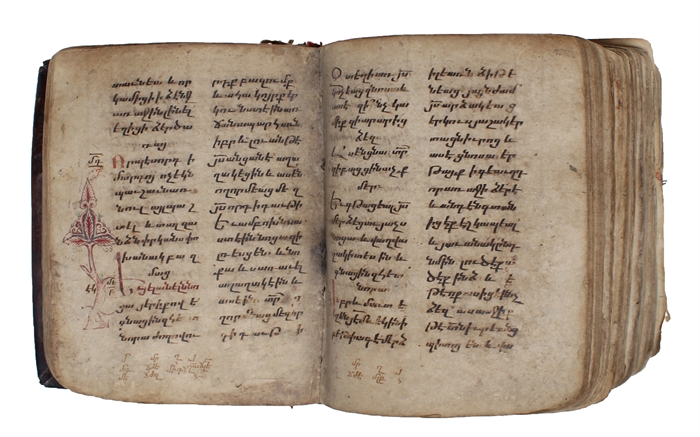 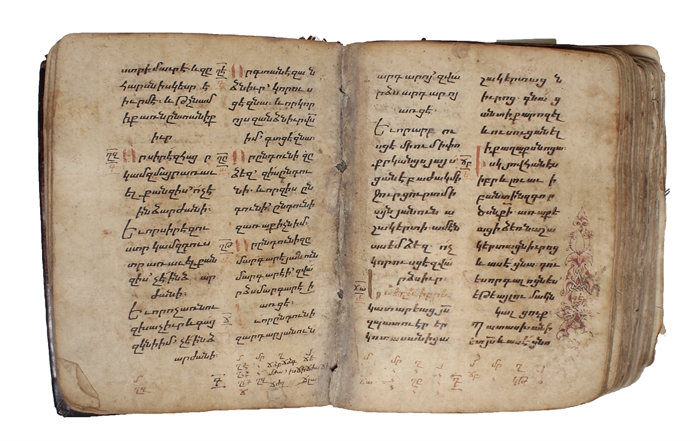 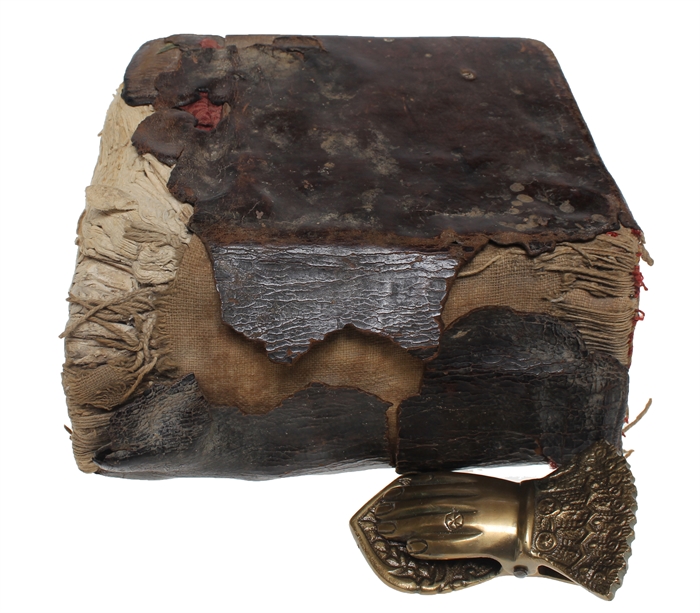 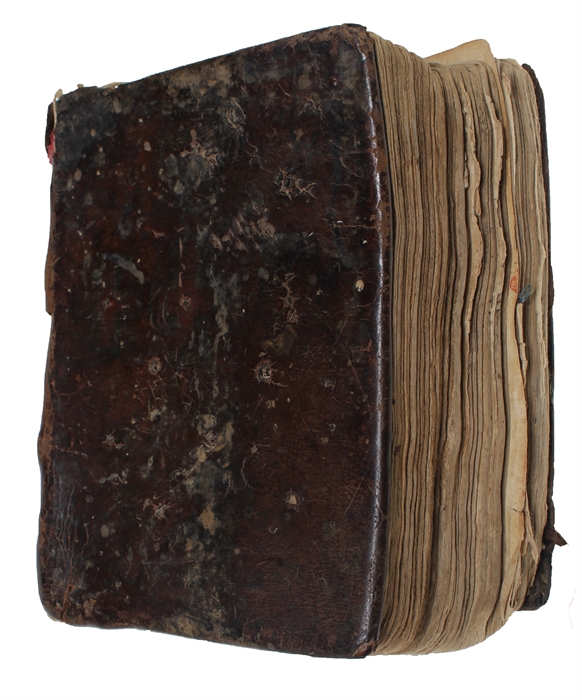 Tetraevangelion (The Four Gospels) in Armenian. Manuscript on polished paper. Written and illuminated by Izit the Monk in the Monastery of Narek, South of Lake Van.

4to. Binding measuring 180 mm x 145 mm. Strictly contemporary full calf binding over wooden boards. Extraordinarily, this manuscript has been preserved in its first binding, which was made by Dom Sarkis (Sergius), priest from Sebaste [as stated on colophon]. The more than 600 year old binding is very worn, especially back board and spine. It is missing some of the leather spine and the lower part (ab. 1/5) of the back board (both wood and leather on recto). Some small holes to front board, from ties and presumably some kind of ornamentation. Quite magnificently, the binding has never been exposed to restorations of any kind, and we have left it as it is, providing us full view of the cloth underneth the leather spine, the original stiching and the original capital cords, and the red silk between the wooden board and the leather. Remains of one tie to inside of back board.

The last portion of leaves is quite worn at the bottom, where the binding has not been able to protect it due to the missing lower part of the back board. The leaves here at the end are curled, affecting script on the last ab. eight leaves. The damage to the leaves is marginal on the remaining portion of leaves at the end and does not affect the script. Apart from that, the leaves are quite worn in places and the book has evidently been well used and read. The first three leaves have extensive worming, causing loss of text, and a number of leaves towards the middle and end of the block have old re-enforcements to inner margins (an old kind of paper pulp). The block is worn at extremities, sometimes causing loss to marginal illustrations/notes. Some of the leaves are loose. The splendid full-page illuminations are somewhat worn.

Three illuminated title-pages (lacking the first for the gospel of St. Mathew) and three half-page headpieces and zoomorphic initials and opening lines of text.

The manuscript was written for Taddeus the Monk, Priest and Philosopher, by Stephanos the Monk (Birth name Izit.), son of Amirbek and Turmeled, bother to Thoma Priest, Lazarus and Stephanos. Stephanos (Izit) is definitely the scribe and with all probability also the illuminator. The manuscript was donated by Taddeus, son of Khnkik and Avta, grandson to Khaceres and Shamam, brother to Stephanos, Astvazatur, Martiros, Tata, Elkhatun, Markhatun, Mama Tikin Zmrukht (Emerald), to the Religious order of the Church of Saint Teothokos, Dom Hussik, Monastery of Narek, near Lake Van (Prior: Lazar the Monk).

[FULL TRANSCRIPTION IN ARMENIAN AND TRANSLATION INTO ENGLISH OF ALL FOUR COLOPHONS ARE AVAILABLE UPON REQUEST].

An early Armenian manuscript from the Monastery of Narek on the southern shore of Lake Van, one of the most active Armenian centers of illumaniation and manuscript production, in its original binding. The four extensive colophons, one colophon following each of the four gospels, are preserved and give a detailed picture of the provenance of the manuscript.
Armenian gospel books usually contain a miniature of the evangelist preceding the corresponding gospel, which is also the case here, followed by canon tables (which, uniquely in Armenian art, follow rather than precede the full-page miniatures).

The scribe Stephanos the Monk (Birthname Izit) was active in the first quarter of the 15th century and is amongst other manuscripts known from a fragment consisting of 7 folios divided between Seattle and Montreal (cat. no. 46 in Mathews, 'Treasures in Heaven'). Izit's style is characterized by details rather than expressive characters which also was a dominating trait for the manuscripts produced in the Lake Van region:
"Gospel illumination at Lake Van is the art of a conservative and conserving community. It sprang from, and supported, a sense of identity. Most Gospels were donated by the owner to a church or monastery, with the request that those who later might look at its pictures or reads its text remember the owner and his or her family, and pray for them. These requests reflect the basic purpose of the book. People bought them in order to be remembered and saved. The illuminations had a role in that process, perhaps even the principal role". (Mathrews, Treasures in Heaven, p. 99).

"In the fourteenth century, a flourishing in manuscript production occurred around Lake Van, featuring a naive style probably of native Armenian inspiration. Figures with very round faces and large eyes with dark pupils were usually drawn against the unpainted white of the paper (Hakobyan 1976, Zakarjan 1980, Leyloyan-Yekmalyan 2009).
"The iconography was often quite different from that of Greater Armenia or Cilicia, displaying echoes of an ancient tradition and at times an imaginatively original interpretation of the text; notable among many talented artists were Tzerun at the end of the fourteenth century and Khach‘atur of Khizan in the mid-fifteenth century" (Der Nersessian 1973b).

Pictorial art from Artsakh/Karabagh is known essentially from fewer than twenty manuscripts of the thirteenth and fourteenth centuries, as indicated in surviving colophons or attribution through stylistic or other criteria (Hakobyan 1989). Iconographically, the art is closely associated with that of the neighbouring Armenian provinces of Siunik‘ and Van/Vaspurakan. "The art is monastic or provincial rather than courtly; naïf and primitive rather than classicizing. The paintings are full of innocent charm. They are immediate in their appeal. The subjects are often rare, sometimes unique, and the inspiration at times dates back to the palaeo-Christian art of Syria and Palestine and the apocryphal Infancy Gospel (Leroy 1964). The pictures in the Gospels, whatever their ultimate sources, display a freshness and beauty that delight all viewers. They are full of surprises and enigmas, which, along with those of Vaspurakan, reveal a popular art, but one that is both original and sophisticated (Kouymjian 2012)" (Kouymjian, "Armenian Medieval Illumination, Armenia. Imprints of a Civilization")