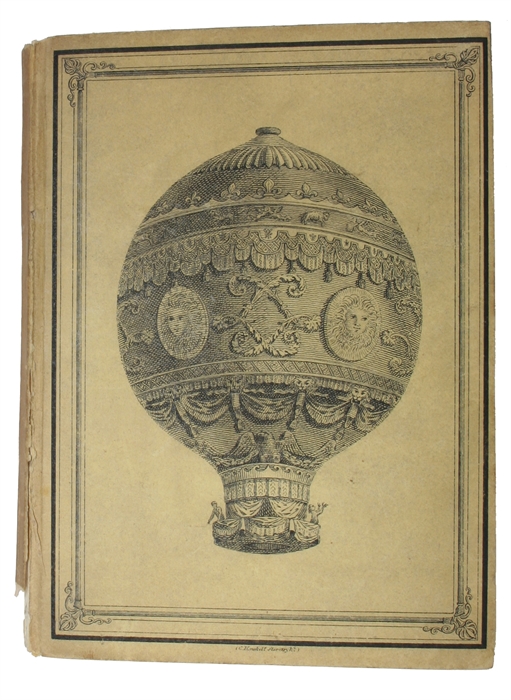 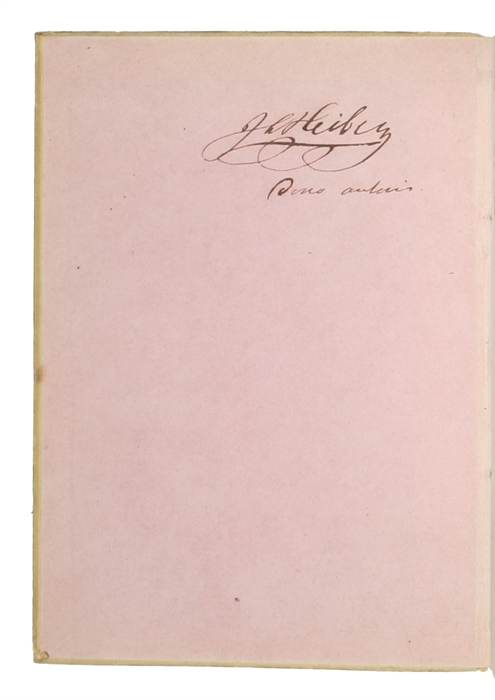 J.L. HEIBERG'S COPY - GIVEN TO HIM BY ØRSTED

Kjøbenhavn (Copenhagen), 1836. 12mo. Original pictorial printed boards depicting air-balloons. The blank spine loose at back hinge and lacking the bottom 1 cm. The boards are in very fine, clean, and fully intact condition, and internally it is virtually spotless.

First edition of the poem entitled "The Airship" by the world-famous Danish scientist, Ørsted (Oersted, Örsted), who is renowned for the discovery of electro-magnetism. The present copy was given by Ørsted to Johan Ludvig Heiberg, in their time a more renowned thinker than Kierkegaard, and bears his signature and "Dono auctoris" (given by the author) to inside of front board.

J.L. Heiberg (1791-1860) was perhaps the most famous cultural persona during the Danish Golden Age. He played a more significant role than any other author or thinker during this period and was the leading character of literature and philosophy in the 19th century. He introduced many German thinkers to Denmark, most importantly Hegel, and he was part of almost all intellectual discussions of the Danish Golden Age. He was also a patron for many leading figures of the era.

Though now primarily renowned for his plays and philosophical works, as well as the role he played for Danish culture, Heiberg had a great appreciation for science as well and was a great friend of one of Denmark's most important scientists, the discoverer of electro-magnetism, H.C. Ørsted. Both Heiberg and Ørsted were frequent guests in the home of Gyllembourg, where they often met. It is during the first decade of the 19th century that they became friends, and it is Ørsted who makes Heiberg aware of the science of astronmy and of Tycho Brahe, two of Heiberg's life long passions. It is Ørsted who introduces Heiberg to a scientific way of thinking, and during this early period he appeared as the protector of Heiberg.

In a letter to Ørsted from 1825, Heiberg writes: "I owe to you my first scientific formation." And about Ørsted in the preface for his "Formenlehre der dänischen Sprache" (1823): "Sie waren es, Herr Professor, welcher mich zum Studium der Natur und ihrer Gesetze leiteten." Heiberg was utterly facsniated with Ørsted and in his youth took upon himself the primary role of Ørsted's disciple and follower. Later, as Heiberg grew in knowledge and esteem, he became Ørsted's important ally. With his own specially developed view of pantheism and rationality as a unity, Ørsted's philosophy was an important step on the way to Danish Hegelianism, - that which became the mature Heiberg's main passion and goal.
As such, Heiberg and Ørsted are closely joined on the points that matter most to them both; together they revolutionized the development of both science and philosophy in Denmark.

H.C.Ørsted (1777-1851) was a follower of the "Naturphilosophie"-school in Germany, and with the "Airship"-poem he builds the bridge between the world of science and that of poetry. He wishes to demonstrate that the new scientific approach to the world is fully compatible with poetry.