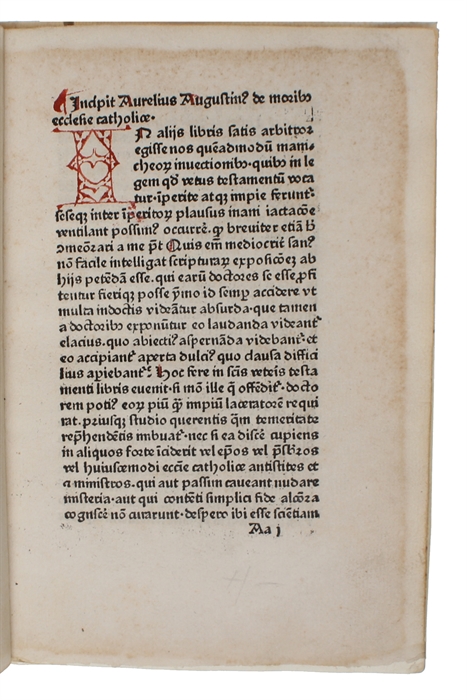 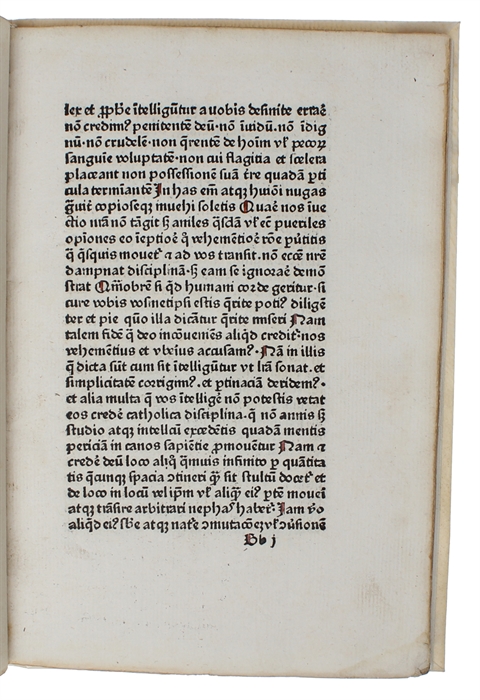 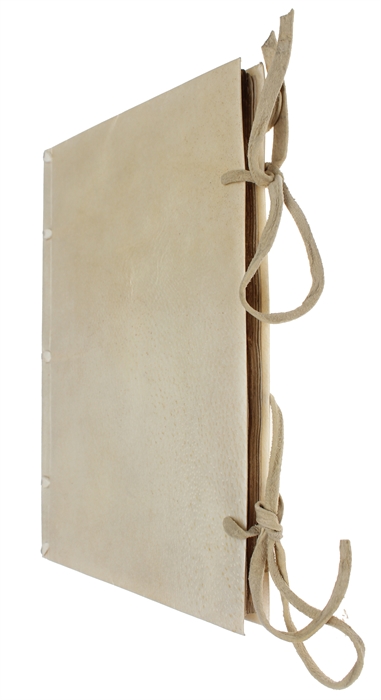 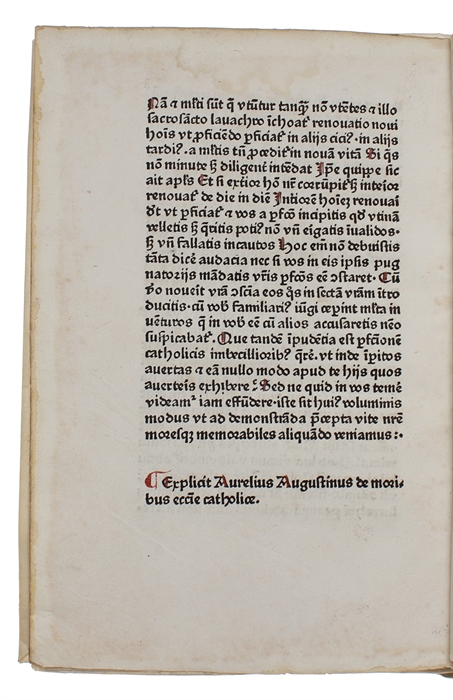 4to. Bound in a newer full limp vellum in old style, with leather ties. Two ec libris to the inside of the front board and neat pencil annotations. Opening five-line initail supplied in hand and decorated, in red ink. A further three 2-line initails in red and initial-strokes in red throughout. One leaf (Cc1) with a margin tear, not affecting lettering. Text-leaves with light even browning. AS very nice copy. 34 ff., the first and last being blank.

"Saint Augustine was a Latin philosopher and theologian from the Africa Province of the Roman Empire and is generally considered as one of the greatest Christian thinkers of all times. His writings were very influential in the development of Western Christianity. According to his contemporary Jerome, Augustine "established anew the ancient Faith." In his early years he was heavily influenced by Manichaeism and afterward by the Neo-Platonism of Plotinus. After his conversion to Christianity and his baptism in 387, Augustine developed his own approach to philosophy and theology, accommodating a variety of methods and different perspectives. He believed that the grace of Christ was indispensable to human freedom, and he framed the concepts of original sin. Augustine developed the concept of the Catholic Church as a spiritual City of God, distinct from the material Earthly City. Augustine's City of God was closely identified with the Church, the community that worshiped the Trinity." (from the 2012-edition of the English translation of "On the Morals of the Catholic Church").

Augustine converted to Christianity from Manichaeism in the year 387 and the following year, he wrote the present work, which was to become fundamental for the development of Catholicism. In his Retractations (i. 7), he states: "When I was at Rome after my baptism, and could not bear in silence the vaunting of the Manichaeans about their pretended and misleading continence or abstinence, in which, to deceive the inexperienced, they claim superiority over true Christians, to whom they are not to be compared, I wrote two books, one on the morals of the Catholic Church, the other on the morals of the Manichaeans."

The work commences thus:
"ENOUGH, probably, has been done in our other books in the way of answering the ignorant and profane attacks which the Manichæans make on the law, which is called the Old Testament, in a spirit of vainglorious boasting, and with the approval of the uninstructed. Here, too, I may shortly touch upon the subject. For every one with average intelligence can easily see that the explanation of the Scriptures should be sought for from those who are the professed teachers of the Scriptures; and that it may happen, and indeed always happens, that many things seem absurd to the ignorant, which, when they are explained by the learned, appear all the more excellent, and are received in the explanation with the greater pleasure on account of the obstructions which made it difficult to reach the meaning. This commonly happens as regards the holy books of the Old Testament, if only the man who meets with difficulties applies to a pious teacher, and not to a profane critic, and if he begins his inquiries from a desire to find truth, and not in rash opposition. And should the inquirer meet with some, whether bishops or presbyters, or any officials or ministers of the Catholic Church, who either avoid in all cases opening up mysteries, or, content with simple faith, have no desire for more recondite knowledge, he must not despair of finding the knowledge of the truth in a case where neither are all able to teach to whom the inquiry is addressed, nor are all inquirers worthy of learning the truth. Diligence and piety are both necessary: on the one hand, we must have knowledge to find truth, and, on the other hand, we must deserve to get the knowledge." (Transl. by Richard Stothert).

Having converted a year before writing the present work, Ausgustine finds himself in the midst of a religious feud that is to change the world and the entire course of modern thought.
In 382, the Roman emperor Theodosius I had issued a decree of death for all Manichaean monks, and merely three tears after Augustine's "On the Morals of the Catholic Church", he declared Christianity to be the only legitimate religion for the Roman Empire.
Due to the heavy persecution, the religion almost disappeared from Western Europe in the fifth century and from the Eastern portion of the empire in the sixth century. After having adhered to the Manichaean faith for a bit less than a decade, Augustine became a Christian and a potent adversary of Manichaeism, seeing their beliefs that knowledge was the key to salvation as too passive and not able to effect any change in one's life.

Manichaeism was a major religion founded in the 3rd century AD by the Parthian prophet Mani (ab.?216-274 AD), in the Sasanian Empire. Manichaeism taught an elaborate dualistic cosmology describing the struggle between a good, spiritual world of light, and an evil, material world of darkness. Through an ongoing process that takes place in human history, light is gradually removed from the world of matter and returned to the world of light. Its beliefs were based on local Mesopotamian religious movements and Gnosticism. It revered Mani as the final prophet after Zoroaster, Gautama Buddha, and Jesus.
Manichaeism was quickly successful and spread far through the Aramaic-speaking regions. At its height, it was one of the most widespread religions in the world and was briefly the main rival to Christianity before the spread of Islam, in the competition to replace classical paganism.

"At its beginning Christianity had a set of scriptures incorporating many moral injunctions, but it did not have a moral philosophy. The first serious attempt to provide such a philosophy was made by St. Augustine of Hippo (354-430). Augustine was acquainted with a version of Plato's philosophy, and he developed the Platonic idea of the rational soul into a Christian view in which humans are essentially souls, using their bodies as a means to achieve their spiritual ends. The ultimate objective remains happiness, as in Greek ethics, but Augustine conceived of happiness as consisting of the union of the soul with God after the body has died. It was through Augustine, therefore, that Christianity received the Platonic theme of the relative inferiority of bodily pleasures. There was, to be sure, a fundamental difference: whereas for Plato bodily pleasures were inferior in comparison with the pleasures of philosophical contemplation in this world, for Christians they were inferior to the pleasures of spiritual existence in the next world. Moreover, Christians came to regard bodily pleasures not merely as inferior but also as a positive threat to the achievement of spiritual bliss." (Encycl. Britt.).

"Augustine was perhaps the greatest Christian philosopher of Antiquity and certainly the one who exerted the deepest and most lasting influence. He is a saint of the Catholic Church, and his authority in theological matters was universally accepted in the Latin Middle Ages and remained, in the Western Christian tradition, virtually uncontested till the nineteenth century. The impact of his views on sin, grace, freedom and sexuality on Western culture can hardly be overrated. These views, deeply at variance with the ancient philosophical and cultural tradition, provoked however fierce criticism in Augustine's lifetime and have, again, been vigorously opposed in the twentieth and twenty-first centuries from various (e.g., humanist, liberal, feminist) standpoints. Philosophers keep however being fascinated by his often innovative ideas on language, on skepticism and knowledge, on will and the emotions, on freedom and determinism and on the structure of the human mind and, last but not least, by his way of doing philosophy, which is-though of course committed to the truth of biblical revelation-surprisingly undogmatic and marked by a spirit of relentless inquiry." (SEP)

The work is rare and we have been able to find no other copies at auction over the last 50 years.